For a dead man intent on telling no tale, Javier Bardem’s Captain Salazar sure talks a lot. Ultimately, the line is just a macguffin, aimed at righting the Pirates of the Caribbean franchise and tying it back to its roots as a theme park attraction. On those counts, Dead Men Tell No Tales succeeds. It’s a ride, all right, exciting enough and resetting the board for a new generation. I’ll admit it — it would be kind of fun to see Salazar rising out of the waters at Disneyland. 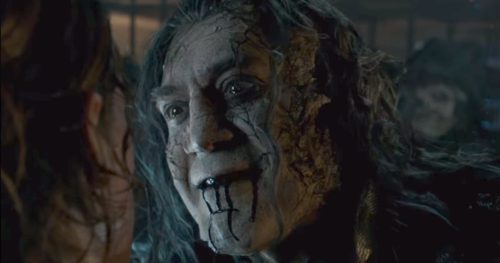 But it doesn’t really ride its swells to the top. What Dead Men Tell No Tales mostly does is echo the original film, with a few updates here and there. Screenwriter Jeff Nathanson clearly learned the franchise goose lesson of The Force Awakens — give the people (mostly) what they liked the first time. There’s a young man looking to break the curse on his father, and a young woman looking to break out of the role her society has set aside for her. This time it’s Henry Turner (Brenton Thwaites), son of Will (Orlando Bloom), who has studied every piece of pirate lore there is. Easy enough to do when his mother, Elizabeth Swann (Keira Knightley), had a similar obsession in The Curse of the Black Pearl.

In order to break the curse, he must find Jack Sparrow (Johnny Depp), once a fine pirate captain and now… a cartoon character. As in On Stranger Tides, Jack appears mid-adventure, like a debauched, unwashed Bond. Co-directors Joachim Ronning and Espen Sandberg give him a rousing stunt sequence equal to anything Gore Verbinski put the character through, but it feels just a little creaky. The new energy to it is that it allows Jack to cross paths with Carina Smith (Kaya Scodelario). Condemned as a witch for understanding math and science, Carina holds the secret to helping Henry. She also has another one that even she doesn’t know. 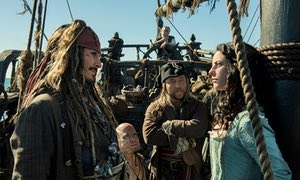 Then there’s Captain Salazar, who Henry ran across in his search for Jack, and who conveniently hates Jack Sparrow with every fiber of his ashy ectoplasmic being. Salazar and his embrous crew have broken free of the Devil’s Triangle to seek Jack Sparrow, who in their minds placed the curse on their torturous existence. The directors at least top the original appearance of the Black Pearl by making the ship not just skeletal but monstrous as it attacks — what’s left of the hull rearing up out of the ocean and engulfing its prey. If you’re going to tell a familiar story, you have to gussy it up.

That’s all part of a fairly brisk first act, with little time for depth of characterization, just putting pieces into place. Somewhere in there, David Wenham makes an appearance as the obligatory Royal Navy officer who wants all the supernatural power for himself. He even allies himself with an actual witch (Golshifteh Farahani), despite spending a good amount of time trying to execute Carina for being a witch.

The only actor who consistently fights to give his role real subtext is Geoffrey Rush, returning once again as Hector Barbossa. In interviews, it’s been clear he’s always thought more deeply about what was driving the character, and if the script doesn’t give him much to work with, he’s still going to work it hard. There’s a believable balance of affection and betrayal between him and Jack, and Rush’s sincerity gives Depp’s performance a little more weight, even if it’s really just a reflection. 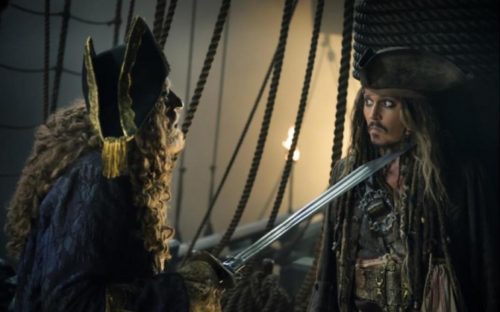 Because it’s clear that once was fresh in the character of Jack Sparrow is now just automatic pilot. Though all of the films in the series have been densely packed, after the first one, they put the popular Captain Jack front and center. He works best slightly off to the side, as comic relief and occasional accidental genius. Dead Men Tell No Tales uses him a bit more sparingly, and luckily has a more weighty central couple in Henry and Carina. 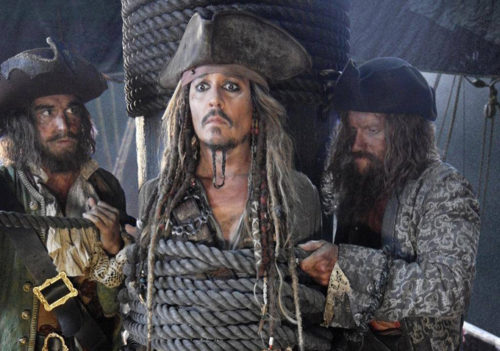 They’re not really pirates, and thus Jack can’t ever really disappear if the franchise continues, but he should be more of a force on the plot and not the driver. In that position, he can make things fun — and that’s what this installment has. After all, it’s just a ride.

But maybe we deserve a little more than that.