Let’s be honest — the only way you could tell which individual series you were watching in the CW’s Crisis on Infinite Earths was by noticing whose supporting casts were missing, and that’s way too much work for something this silly and fun. (I had to rewind a couple of scenes to double-check if I’d missed when a major character rejoined the group, and nope, Tyler Hoechlin’s Superman just randomly showed up in a fight scene — just like in a regular company-wide comics crossover.) So if you haven’t watched any of these shows regularly, it doesn’t matter.

Arrowverse mastermind Marc Guggenheim pulled off something astounding, not just tying together all his superhero shows currently on the CW, but giving place to all the live-action shows on DC Universe. And… spoiler… more.

Seriously. Spoiler. Please read no further if you have not yet watched it.

In the midst of Barry Allen (Grant Gustin) running through the Speed Force in order to save all reality by connecting to key memories for all the Paragons (no, really, do not think too hard on this), the event paused for a comical moment that doesn’t quite change everything, but had better echo down the line.

Stopping in STAR Labs — maybe not his — Barry found himself face to face with an armored red figure, just as puzzled to see him. The Arrowverse Barry realized, but slowly, that he was seeing proof that this whole multiverse thing was more complicated than he’d thought. That red-armored figure was, of course, Barry Allen as played by Ezra Miller, the Flash of Batman v Superman: Dawn of Justice, and Justice League. And it had never occurred to me before that despite appearing in three movies (including Suicide Squad), that Barry Allen had never actually been called the Flash. We all just assumed it.

And now he’s taken his name from crossing over with the Arrowverse.

Before diving into what this could mean for the future, let’s pause to geek out about how cool it was. Years ago, when Miller was first announced as playing the cinematic Barry Allen, he praised Gustin, whose TV series had launched less than a month before. At the time, Miller also showed he totally understood what you could do with the character and DC mythos in general, saying that he hoped they’d give him a moment in his movie where he broke through into the Speed Force and saw Gustin running alongside him.

This moment was even cooler. 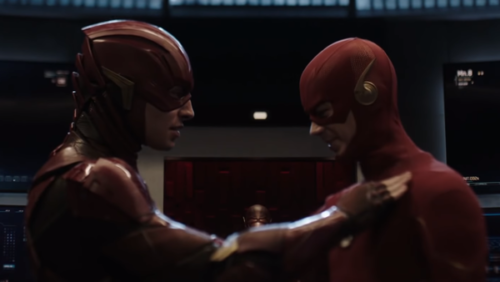 Miller is still at this point 100% committed to playing the Flash in a solo film, currently announced as being released in 2022, only four years after its originally scheduled release date. IT director Andy Muschietti is allegedly helming it, and they’re still planning on creating their own version of Flashpoint, which would allow for some fixes in the movie continuity, if we even need them. There’s a Justice League that Wonder Woman, Aquaman, and the Flash all clearly formed — but in two years they’re going to have a much younger Batman in the form of Robert Pattinson.

For the first time, I think Flashpoint is the way to go, as it’s sort of a mini-Crisis, and would allow for this scene to happen again. Miller even referenced Victor Stone, and if two years from now we could see this Flash of Two Worlds moment from Miller’s point of view, well, it’s the kind of fan service I can get behind.