Whenever I go to a convention, I like picking up books from creators I might not have heard of, but there’s something about it that made me stop. When I walk into a comic book shop in whatever town I’m visiting, I ask “what do you have that maybe I’ve never seen before?” and walk out with more independent books. And, because life is busy, I put them on a stack to read later.

With no new comics right now, it’s time to turn to that stack to read and recommend a few books that are either off the beaten path or just may never have crossed your path because they hadn’t made it to your local shop. Join me.

In a world where superheroes are needy and whiny whether it’s their day off or not, it sucks to be the staff of a resort designed just for them. The supervillains all know the heroes are there, but if you think the heroes will lift a finger to defend themselves when they’ll barely lift a finger to get themselves a towel by the pool, you’ve got another think coming. As the tag line goes, “they check in. They don’t help out.”

Mercado, also creator of a series from Oni Press called Sci Fu, put together this series focused on Chet, a hapless do-gooder in Cityberg who keeps getting in trouble for doing good. His unseen mother forced Chet and his cat Boomer to work for Grandma Zee, his actual grandmother and the proprietor of Hero Hotel. Chet’s an ordinary guy, but Boomer once mistook “power milk” for “powdered milk” and gets intermittent superpowers. Very rarely do those powers help a situation. 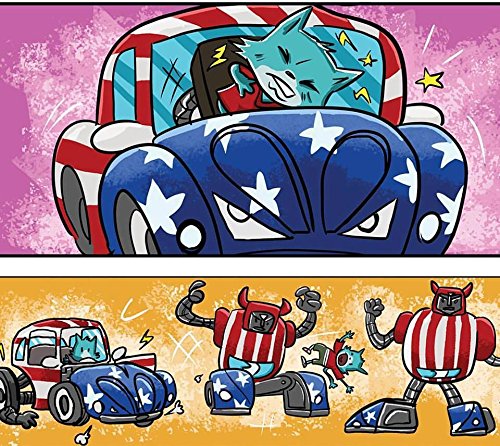 Though filled with clever digs at well-known superhero comics tropes, Hero Hotel turns out to be a sophisticated all ages book. Kids can identify with Chet just trying to do the right thing and it turning out wrong — though eventually it gets right. And for every jibe aimed at well-known heroes, Mercado has a balancing joke good for ages 6 to 67, assuming 67 has an arrested 12-year-old boy sense of humor.

He’s also got an appealing cartooning style that would fit in most of Scholastic’s popular Graphix line, but this is from Fanbase Press, which publishes another book I need to re-read for this stack, the Eisner-award winning Quince.

If you need to be further sold on it, Mercado has the first 16 pages up on his site — give it a read.

As for how this ended up in my stack, I was at a grand opening event for Collector’s Paradise in North Hollywood, and Mercado was one of several creators signing. I picked up both Hero Hotel and Sci Fu book 1, and I’m glad I did. 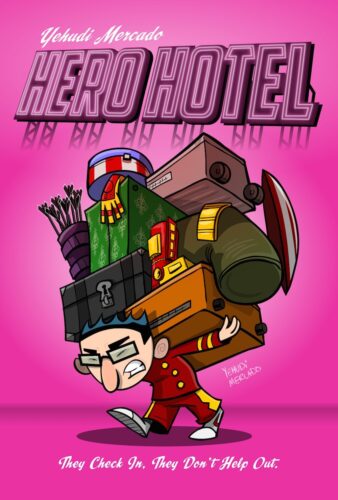 Fanboy Planet is an affiliate of Amazon. Any purchase you make through this site may result in revenue for us.