Metallic echoes thunder through the cavernous boiler room as a haggard Dr. Henry Jekyll desperately runs for his assistant, Ziggy Poole. Pounding down a steel staircase, he bursts into his shadowy lair (though it’s still limned by neon blues and greens – the shortcut color scheme for cyberpunk). Instead of Poole, Jekyll finds someone else poking around his secret lab.

In an early draft of the script, this lab isn’t quite so secret, just your average hospital basement headquarters for an average mad scientist. But what the crew at Creative Light found on location changed things a bit. Even if production designer Mark Teague had not built a kicking and vaguely creepy lab (which he did), this place constantly cries out for dark deeds to be happening.

Outside, you wouldn’t necessarily think so. Across the street in this East L.A. neighborhood, children play in the beautifully landscaped Hollenbeck Park, many no doubt spilling out of the nearby elementary school. And then, Linda Vista Community Hospital looms on the left. 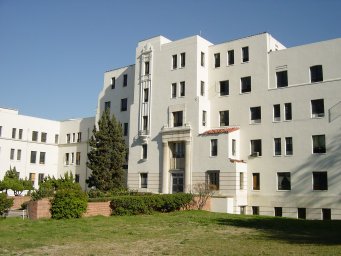 At first glance, all you would notice is its older architecture, definitely a building from the forties. Look closer at the edifice. A few windows are broken, the paint is peeling, and the sign out front has been tagged. Though the parking lot has spaces still earmarked for “doctors only,” it’s been a while since any real medicine has been practiced here.

Instead, production companies, including Creative Light, use the site as a film location. Though walking its long dark halls may make a person a bit on edge, half-expecting a ghost to pop out, it isn’t only horror films that have taken advantage of the place. Because of its classic look, Pearl Harbor filmed some sequences here. But let’s face it – it’s ideal for a horror film, because it looks like it should be haunted. In an antechamber to the boiler room, in fact, sits a discarded patient privacy screen spattered with blood. Okay, maybe it’s red paint, but why spoil the mood?

Doing a little research online, it turns out that Linda Vista actually is a Los Angeles haunting hot spot. According to TheShadowlands.net, this abandoned hospital (and just why was it abandoned in the first place, hmm?) has had quite a bit of spectral activity.

“People who go there have reported seeing lights and hearing a little girl laughing and playing around in there. Screams, cold spots, noises, cries, moaning, lights coming on and off, noises could even be heard from the street at night with no one inside. A doctor has been seen on the main building, corner window, top floor looking out through the window …wearing a doctor’s suit and a tie. There is a room full of cages and a group of people claimed seeing a mentally ill patient (ghost) roaming inside a cage in that room.”

Overlooking the parking lot is an administrative office with a french-doored balcony. Creative Light commandeered it as the production office during their time there, situating the make-up room two doors down. Though a direct staircase leads cast and crew to the basement set, most choose to take a route through the open air of the parking lot. 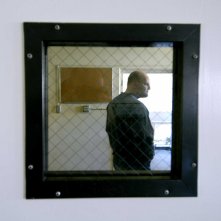 It could be to escape mold, or maybe …something else? After all, in the production office restroom, somebody has scrawled a telling slogan on the wall: “The dead are watching you.” It’s a sobering thought, and certainly enough to make one never urinate again.

If we could just attach a plot to the atmosphere, Linda Vista could have a movie unto itself.