I spent two days on the set of Jekyll, all in the secret basement laboratory of Henry Jekyll (Matt Keeslar). On the first day, the shooting was a variety of scenes with Jekyll and Ziggy Poole, his assistant, played by Desmond Askew, covering various moments in the development of Edward Hyde.

Most of the second day, however, was devoted to a climactic confrontation between Jekyll and his friendly rival/enemy, Dr. Richard Lanyon. Somewhat cast against type, sitcom star (and yes, Weekend At Bernie’s survivor) Jonathan Silverman plays Lanyon, turning his hapless persona to acid when necessary.

Excited to be involved in Jekyll and eager to help, Silverman grabbed me during a break in shooting and dragged me to his trailer for an interview. Hey, it’s my job and all, but rarely do you get an interview subject so willing to talk.

Derek McCaw: What attracted you to this project?

Jonathan Silverman: The salary, really, is what attracted me.

DM: In the original casting, you were probably the highest profile actor.

JS: That’s always frightening, isn’t it? I had been a fan of the Stevenson novella, and certainly have fond memories of the Spencer Tracy and Ingrid Bergman version. So I liked the chance to be in this project and play this character, who has a lot of meat and a lot of different colors. He’s a doctor. He’s obviously very intelligent, and has a good, kind side.

But like Jekyll describes, all men have a good and a bad side. This character, Dr. Lanyon, gets to show his dark side quite a bit. That always intrigues me.

DM: You’re almost the villain of the piece.

JS: In a way, in a way he’s a villain. The true villain, of course, is Hyde. But there’s a lot of Hyde in Lanyon. It’s always a good time to play less than reputable characters, and this is certainly one of them… as I’m playing with my goatee…really Snidely Whiplash. 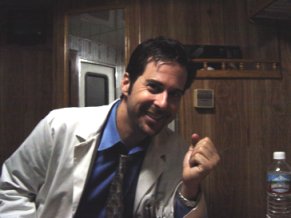 DM: This is not the kind of role that you’re known for at all.

JS: I enjoy playing them, but no, I’m not perhaps as known for playing the bad guys.

DM: You’re also known for comedy, and this doesn’t really fit that mold.

JS: Oh, I’m trying to make it funny, one way or another. But no, I don’t think this is intended to be a comedy. It’s got a lot of flavors and textures to it. It’s genre, a horror film. It’s a drama at its core. What’s most interesting is that even though it’s a modernized telling, it’s a very loyal, honest telling of the Stevenson piece.

It’s interesting to see how creative Scott Zakarin, our writer/director, has gotten. He’s kept a lot of the character names. My favorite is the Utterson character. In the novella, Utterson is a lawyer. In this version, it’s still an attorney, but now it’s a female, Michelle Utterson. And she’s the love interest, really. The heroine of the picture.

There is a Lanyon character in the novella and in the Barrymore version and the Tracy version. Of course, in both those versions, my character of Lanyon is the one who ultimately kills Mr. Hyde. And of course in this, well, um, you’ll have to see the film. But I don’t kill anybody.

DM: Is that a disappointment to you?

JS: (grinning) Yes, it is. And maybe I’ll just give a little warning to those who haven’t seen the film – I don’t want to blow anything – but let’s say, by chance, hypothetically, let’s say I die.

I was doing a movie with a wonderful actor and friend of mine, Joey Pantoliano, Joey Pants as he’s commonly known. He was shooting The Fugitive with Tommy Lee Jones, and in the original script and pretty much in the version that was shot, he dies at the end. A horrific death. But he begged the director, “can I just breathe? Can I just say something as I’m dying, in case there’s a sequel, so I can be in it?”

So they did. He sort of grunted and moaned a little bit. By the time they made the sequel, his character was fine, he ended up being the second lead, and he made a whole bunch of money. So I’ve asked Scott if I can breathe a little bit. I’m wounded.

DM: It’s certainly open in the version I read.

JS: My back is broken. Some people can survive with a broken back. Yes. 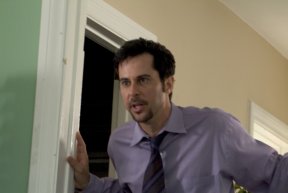 DM: How do you feel about the speed of this production?

That part’s not that hard. To be honest with you, and I shouldn’t jinx it, but this has been a very pleasant experience. It hasn’t been terribly draining.

Now, the gentleman who’s sharing the other half of this trailer with me, Matt Keeslar, I don’t think I’ve ever seen anyone work this hard on a project before. I’d go insane if I had his job. And he’s doing it flawlessly. He’s absolutely superb. And kind. And funny. He should be given many medals for both his work as a professional and for being such a professional doing it.

DM: Have you done genre work like this before?

JS: Yeah, I did one science fiction movie, which I believe won some sort of award. A guy named Jack Sholder directed it. It was myself, Helen Slater and Martin Landau. It was a feature-length version of a short that was nominated for an Oscar, called 12:01. Kurtwood Smith played the part in the short. This man’s lunch hour kept repeating through this time bounce theory.

When New Line turned it into a film, his entire day was repeating. Every day past midnight, at 12:01, he would relive his day and try to change the world. His girlfriend is murdered; he tries to figure out a way to save her.

Then of course, while we were shooting the movie, Groundhog Day came out. It’s a fabulous film, one of my favorite films, but obviously, Bill Murray’s day kept repeating. So by the time our movie came out, everybody thought we’d ripped off Groundhog Day.

I’m sorry, you asked me a question that had nothing to do with the plot of that movie. Yes. I have done genre films before. 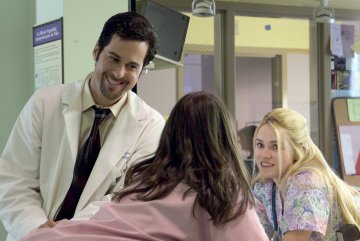 DM: That brings up a good point, because I’m sure that happens a lot.

JS: And Groundhog Day came out after the original short, so if anyone was ripping someone off…(laughs)

DM: Well, this movie is sort of stuck in that situation, too, since Dimension has just optioned a take on the story called Hyde. It was officially announced about a week before all this started. So while Jekyll was in development first, it may look like they got the idea from Steve Niles. So this happens all the time.

JS: You know, the Stevenson story is so brilliant and timeless, and has been told in so many different forms and genres, I’ve even seen the musical version on Broadway, which I enjoyed very much.

JS: I saw it with David. Yeah, who was fantastic.

DM: Do you feel any weight with that, so many versions before yours?

JS: There’s certainly pressure to tell the story correctly, with so many people knowing what the story is. But I think people will get a kick out of seeing how it was modernized. And little touches, like the hospital we’re working at is called the R.L. Stevenson hospital. Just little pieces of homage.

DM: What’s been your favorite part of doing this so far?

JS: Any time I can play a doctor, I’m making my mother happy.

So this one’s for you, Mrs. Silverman. Thanks for letting your son come out and play.