The longest running musical in Broadway history hit comics shops in the UK today, and just like the original production, will land in the US a little later. But the magic of comics is that you don’t have to have two original cast albums — just one graphic novel! Sir Andrew Lloyd Webber’s The Phantom of the Opera (based on Gaston Leroux’ novel) has been adapted by Cavan Scott and José María Beroy and published by Titan Comics. To celebrate, they’ve given us a trailer — which proves that Phantom fans will want this book. The US doesn’t get it until January 11, so too late for the holidays, but maybe Valentine’s Day? (Though unlike many, I don’t think this comes anywhere NEAR being a healthy romantic love story.)

Even if you’ve never seen the stage production (or the film adaptation of the stage production by Joel Schumacher), you know the story. Or the chandelier crashing down over the audience’s head. And of course, one of pop culture’s greatest human monsters, the somewhat hideously scarred Phantom. In the musical version, it’s not as bad as in Leroux’s novel or Lon Chaney’s famous make-up design for the silent film. Beroy fairly sticks to the musical, which is a gentler telling than other adaptations.

It’s a book I’m intrigued by, mainly because Scott has been doing some great comics work with licensed properties. In addition to being an architect of Star Wars: The High Republic, he has spent time writing Doctor Who novels, comics, and audio dramas. Recently, he and George Mann (another favorite of mine) collaborated on an Audible podcast adaptation of The Hound of the Baskervilles. So while I might be more interested in what he would do with Erik the Phantom if left to his own devices, I’ll take this.

But Cavan, if they offer you Love Never Dies, run! 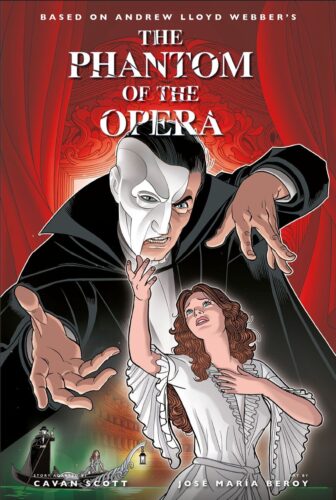 The Phantom of the Opera (graphic novel)

The Phantom of the Opera (Gaston Leroux’s novel)

The Phantom of the Opera (Lon Chaney silent film)

Fanboy Planet is an Amazon affiliate. Any purchases made through Amazon links on this and other pages may result in revenue.