Everybody loves raccoons until they start showing up on your lawn. But Santa Claus is such a good-hearted fellow that even when set upon by four of them, he (sort of) reforms them. Clutch, Ghost, Steel, and Sarge descend upon the muscular but jolly old elf, upset because he never brings them presents. But there are worse things lurking out there for Santa, monsters eager to upset the balance of light vs. darkness, and he definitely needs raccoon bodyguards!

The Christmas Bandits by Brian Monge and Ariel Olivetti makes an fun entry into the superheroic Santa genre. (Yes, I’m coining that right now — Rise of the Guardians and Klaus count.) Wearing the influence of Jack Kirby on its red and white sleeve, the book moves almost as fast as Santa has to to deliver all those toys in one night.

For raccoons, the bandits sure feel like the Newsboy Legion. They’re all mouthy in different ways, ready with a quip or retort, while Santa Claus speaks portentously. The action is almost non-stop, with occasional panels of raccoons posing for dramatic effect, There are hints of a larger mythos, as a warrior named Katalina drops in and out of the action when needed. While The Christmas Bandits never dives too deep into characterization nor backstory, it focuses on fun with the depth provided by Olivetti’s lush art. 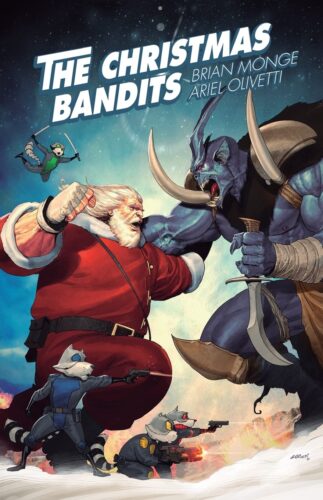 They’ve built a heck of a world, with Monge laying groundwork for Olivetti to stretch. He’s got monsters (Gargillions) that look appropriately scary, led by King Tusk, an overlord right out of a Power Rangers series, but slightly more serious-looking. The bandits themselves might be alien raccoons, because they’re a little more cartoony than the other characters, which allows Olivetti to cut loose on animated hijinks. And as far as world-building goes, the action goes global. Broad strokes brushed, perhaps, but it all adds up to delight.

It’s not hard to see the potential for a toy line, or an animated series, but Monge seems more focused on just pouring love and intensity into this graphic novel. There’s one line of dialogue that might make this inappropriate for younger readers, and Katalina does brutally dispatch one monster, but for 4th graders and up, it’s fun. And for adults who are fans of Olivetti’s work, it’s a must-have.

The Christmas Bandits might not be at your local comics shop; I came upon it just walking by Monge’s table at L.A. ComicCon. If you see it, don’t walk by — pick it up. Then read it on the night before Christmas…

The Christmas Bandits on Amazon 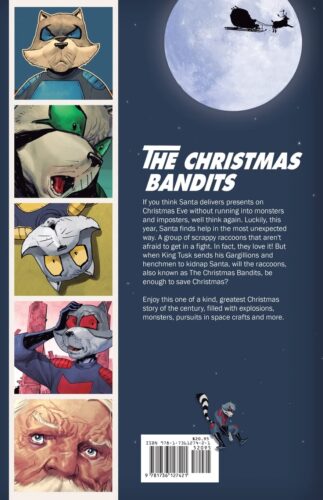 Fanboy Planet is an Amazon affiliate. Any purchases made through links on this site may result in revenue.