With Frank Castle appearing in the second season of Netflix’s Daredevil, it’s no surprise that Marvel would relaunch a Punisher series. Even without the media attention from Jon Bernthal playing The Punisher on TV, the character stays popular, even if his books waver in quality. But this creative team choice is bold, daring, and most importantly interesting.

Becky Cloonan has been doing consistently cool work for years — and as an artist, she’s gained a lot of attention for works like Demo and The True Lives of the Fabulous Killjoys. No surprise that she can write (Gotham Academy is a great book), and no reason she couldn’t do a kick-ass Punisher. And probably will. Teaming her with Steve Dillon — who is one of my favorite artists to ever do a run with the character — makes this into something I didn’t think would happen again: a Punisher title I want to buy.

The one man war on crime is reforged, reloaded and re-energized in 2016! Frank Castle is back to terrorize the underworld of the Marvel Universe once more in THE PUNISHER #1! From rising star writer Becky Cloonan (Gotham Academy, Southern Cross) and legendary Punisher artist Steve Dillon comes a new beginning for Frank, and an ending for anyone who stands in his way.

A routine drug bust on the streets of New York City turns out to be anything but. There’s a new drug hitting the streets. One that has the ability to create unstable super soldiers. As the threads begin to pull loose, the man behind the drug’s startling connection to The Punisher is revealed: An old associate from Frank’s military days! But as he follows the trail of drugs and digs deeper and deeper into the Northeast’s heart of darkness – it’ll be a fight for sanity and survival.

“I try and look for outside inspiration in everything I do, and this Punisher series is no different,” says writer Becky Cloonan, discussing her take on the series with Marvel.com. “My goal is to present a new take on Frank Castle but still have him ring true to the character.”

Mobsters, villains and drug runners beware. Frank Castle is back…and he’s coming for you. Be there as a new war on crime is waged in the new Marvel Universe next year when Cloonan & Dillon bring you THE PUNISHER #1! 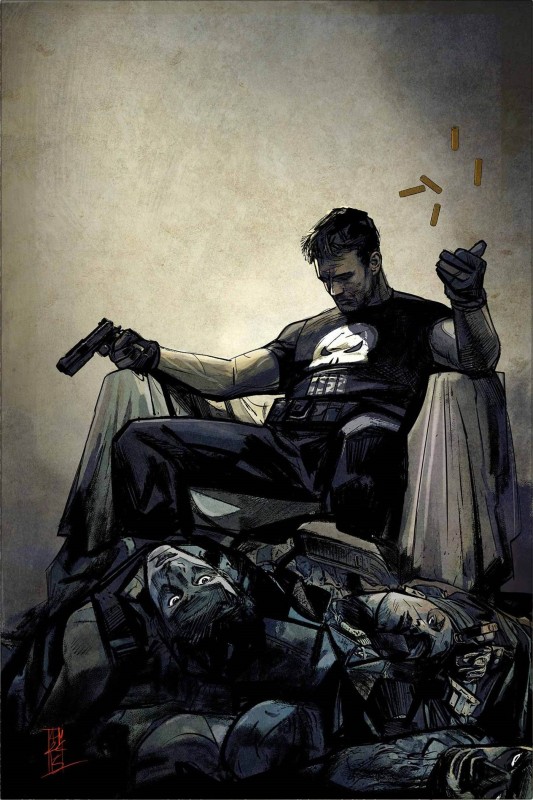