It turns out that yesterday was actor Frank Gorshin’s birthday. If that name doesn’t immediately ring a bell, it’s a shame. Aside from playing a key role in Terry Gilliam’s 12 Monkeys and the Star Trek episode “Let That Be Your Last Battlefield,” Gorshin was a heck of an impressionist. Like, scary good. But really you know him because he was The Riddler on the 1960s television show Batman (as well as the movie spun off from it), and nobody came close to his performance. Nobody. (He reprised the role on Legends of the Super-Heroes and, sort of, Back to the Batcave.)

I’ve been on a Batman ’66 kick the past few days, so this is serendipity. I found a clip of Gorshin guesting on The Dean Martin Show, rare both for showing off his full versatility and for Dino actually being on stage with him. He starts off by doing a series of impressions of famous actors playing Batman and Robin, and then melts into being The Riddler to sing the song he recorded and released.

The reason Frank Gorshin so completely owned that role is that he was the only one who took it seriously. He knew E. Nigma was insane and disturbing to those around him, and of the villains on that show, he’s the one whose performance could be put up against Christian Bale or Ben Affleck and it would come off as funny and frightening. So enjoy… the Riddler.

Also, interesting side note I discovered noodling around, the makers of the videogame Harry Potter and the Chamber of Secrets modeled a chocolate frog card after Gorshin –the historical wizard Yardley Platt. 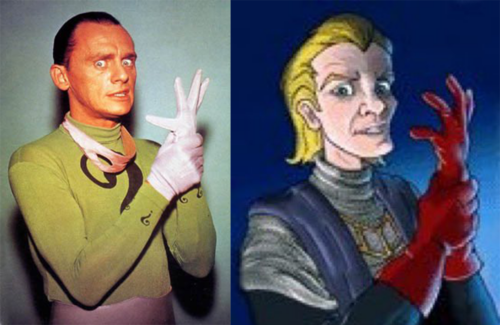 Sadly, Frank Gorshin passed away in 2005 at the age of 72, but his talent made an impact that he might not have appreciated. But we appreciate HIM.