We’ve talked about this possibility on recent podcasts, but Dwayne “The Rock” Johnson confirmed it yesterday. In an Instagram post, he mentions reading the script for a project he’s going to do with Shane Black in 2017 – and fans have put two and two together.

Black, whose film The Nice Guys opens this week, has said a few times that he hopes to tackle Doc Savage next, and that he wanted Dwayne Johnson to star. And now Johnson says he’s working with Black in 2017? It has to be the Man of Bronze, right? RIGHT?

If that excitement sounds a little shrill, it’s because the project seems almost too good to be true.  Fans of the pulp hero have had so many stops and starts – first with the 1975 film starring Ron Ely, then with Arnold Schwarzenegger’s interest. Black has been attached as a writer/director for a few years, and at one point had been looking at Chris Hemsworth for the role. But he’s right – Dwayne Johnson is perfect.

Doc Savage, a seminal superhero created in 1933 by Lester Dent under the pen name Kenneth Robeson, is a human forerunner of Superman. Nicknamed Doc because he is a surgeon first and foremost among his skills, Clark Savage, Jr. travels the world with his companions righting wrongs and fighting evil. Yes, he is also an influence on Buckaroo Banzai, who had a little news of his own today. 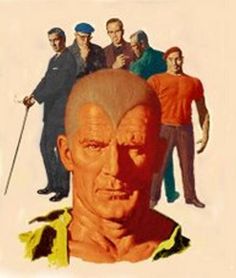 Our fingers are crossed that this one comes to fruition.