In the midst of the CW’s Crisis on Infinite Earths, the network ran a teaser for an upcoming series — Stargirl. Starring Brec Bassinger as Courtney Whitmore, the series may or may not fit in the Arrowverse in the wake of Crisis. (We have to wait until the finale in January to find out if all the Earths are merging, or if we’re returning to the multiverse.)

High school sophomore Courtney finds out that her stepfather Pat Duggan (Luke Wilson) was once Stripesy, the sidekick to Starman (Joel McHale). When Starman’s weapon/tool/sonic screwdriver stand-in works for Courtney, she assumes the identity of Stargirl and sets out to revive the Justice Society of America. Created by former DC Chief Creative Officer Geoff Johns, Stargirl could be a fun addition to whichever universe it lands.

Originally announced for DC Universe, at least the first four episodes will be shared between networks. Each week, DC Universe will stream it exclusively for a day, and then it will be broadcast on the CW the next night. The series has been delayed a couple of times, which McHale seemed to reference in a talk show appearance last summer, What Just Happened? with Fred Savage. Though it could have been playing up to his own persona, the actor seemed frustrated at the delay, and genuinely pleased to be playing Sylvester Pemberton.

First appearing in comics in 1999 under the title Stars and S.T.R.I.P.E., Courtney’s world had a slightly different backstory. Duggan was still Stripesy, but he helped Courtney with a mecha he called S.T.R.I.P.E, as he was really too old for the old “fighting crime in a skintight t-shirt” game. It was Johns’ first major creation in comics (with artist Lee Moder), done in honor of his own younger sister Courtney. And if you can find it, it’s a really fun book. 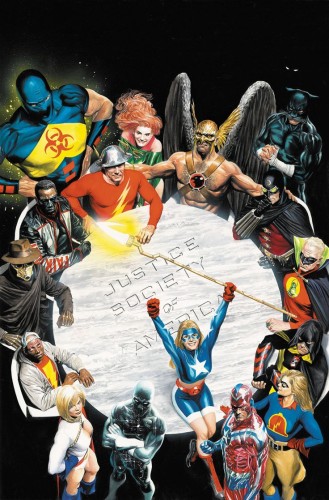 This isn’t Courtney’s first live-action television appearance — she and select JSA members appeared in the 9th season of Smallville. A quick check if iMDB promises many other members of the JSA appearing, though maybe as retired heroes while Courtney finds a newer, younger, more CW-friendly generation of super powered youth.

And even if Warner Bros isn’t saying it, it does look like this is well-suited for the CW on a more permanent basis. In the current Crisis on Infinite Streaming Services, it’s hard to know what their strategy is or should be. Doom Patrol‘s second season will be on both DC Universe and the upcoming HBO Max, and though Titans has been announced as having a Season 3 on DC Universe, it’s set in the same reality as Doom Patrol (and made a quick appearance in Crisis), so it, too, could make it over to HBO Max, and with a little editing and redubbing would fit pretty well on the CW. And by the way, they have the free, vaguely ad-supported CW Seed service, too.

I just want one place to find DC shows and DC digital comics. Also, Santa, I want a Christmas miracle and have Warner Bros find a place to revive Swamp Thing because, damn, that was good.

If you want more Sylvester Pemberton backstory, it’s in All Star Comics: Only Legends Live Forever, which we recommended on our gift list this year.

Fanboy Planet is an Amazon affiliate. Any purchases you make through Amazon links on this site may generate us revenue.