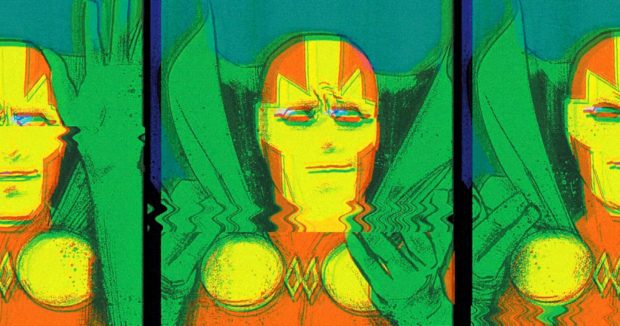 Last week, comics fans were saddened that writer Tom King would be leaving his epic run on Batman early, with issue #85, before he could finish his long-planned story. Then DC announced that King would be wrapping it all up with a separate 12-issue mini-series, Batman/Catwoman, perhaps more in line with the books he had gotten attention for, The Vision, Mister Miracle, or the just finishing Heroes in Crisis. And then… this.

Don’t cry for Tom King, people, because The Wrap reported that he had been tapped to co-write Ava DuVernay’s film of Jack Kirby’s New Gods — and DuVernay herself confirmed it on Twitter:

After a flurry of attention when the film was initially announced, it got lost in (of course) the Justice League/Batman Ben Affleck confusion. But it’s clearly moving forward, and rumor had it that the first film (I’m daring to dream) would focus on the romance between Mister Miracle and Big Barda — which was the focus of King’s Eisner-award winning series with artist Mitch Gerads.

Kirby’s original epic told of two warring worlds, Apokolips and New Genesis. Dominated by the fearsome god Darkseid, Apokolips is a world of darkness from which Scott Free escapes with Barda and, on Earth, assumes the identity of Mister Miracle. Darkseid sets his sights on Earth in order to find the Anti-Life Equation, which will allow him to control the universe. (In the movie Justice League, the villain Steppenwolf is one of his harbingers, and fans regretted that Darkseid did not appear.)

As Gerads had also cryptically tweeted that he knew big things were coming, and Clay Mann will be drawing Batman/Catwoman, might it be possible that Gerads will have a seat at the creative table for DuVernay’s film, as yet assigned a release date?