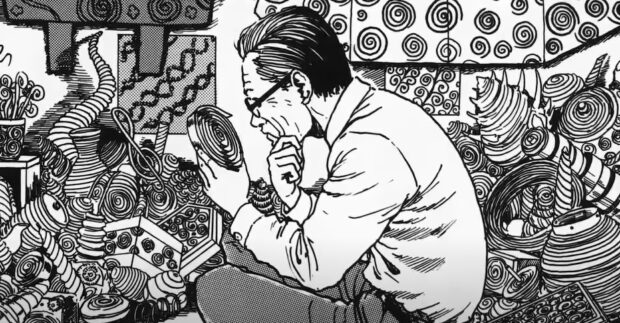 Actually, there’s no way to discuss Junji Ito’s Uzumaki without acknowledging that yes, it’s creepy. If you have to compare popular horror works in manga, Attack on Titan is occasionally scary and gross, but Ito gets under the skin. And shows you what’s under the skin. Then twists it. In the case of Uzumaki, sometimes quite literally.

The title translates as “Spiral,” which somehow seems less prosaic. The work has been out for years, and inspired a live-action adaptation with mixed reviews. Adult Swim/Toonami’s adaptation, however, seems more straightforward, or as straightforward as something can be when talking about Uzumaki. If this teaser can be trusted, the anime keeps to black-and-white, which may work really well. It’s what comes out of the shadows that gets scariest, and we don’t need color for that.

Ito gets the little details of town life down, and like Stephen King, starts exposing the cracks. Each chapter finds a new way to be disturbing with the basic concept — a town becomes obsessed and possessed by the natural phenomenon of spirals. It sounds, innocent, doesn’t it? It’s not. It’s one of the most disturbing horror pieces I’ve read in years.

Adult Swim posted this as part of their parallel to ComicCon@Home — Adult Swim Con. They’ve held off-site events in San Diego for years, and scheduled their panels for after hours so as not to be really directly competing. In addition, ComicCon@Home had a panel focusing on Ito’s manga work, and I’ve included it below — though I have no idea how long they’ll be leaving it up.

An earlier deeper dive into the work:

The ComicCon@Home panel focusing on Junji Ito courtesy of his American publisher, VIZ.

Fanboy Planet is an Amazon affiliate. Any purchase made through an Amazon link on this site may generate revenue for us.

That said, you may want to dive into Junji Ito’s work further. His adaptation of Frankenstein changes the story slightly in a way that begs for film adaptation.