Magneto, when the walls fell.

That’s how it must read to somebody not intimately conversant in the current run of Marvel’s X-Men books. Both Jonathan Hickman and Leinil Francis Yu are fantastic talents, so you can trust that the book will be done well. If you’ve been reading just about every book Marvel has done with even a slightly cosmic bent, you probably know who/what the Cotati are. And Krakoa — once, current, and future key location of the X-Men since Giant-Sized X-Men #1. But put them in a mix with Hickman’s new concepts? Well, read this headline Marvel sent us last night:

The Cotati invasion of Krakoa. The summoner of Arakko.

That’s all Marvel sent with the image below. I do get it. It’s just… with a flagship title and waning sales, you’d think we’d be working harder to make the new work seem a little more accessible. Trust the talent. I do. But I’d like to see comics advertising attract new readers, not just the already involved. I’ve heard the X-Books are really fun again. (I’m admittedly way behind.) But come on… this promo tells you… “X-Men: Path to X of Swords.” You need to jump on to yet another crossover event! And the actual book is X-Men #11. Maybe I’ll step on the path. But I’m annoyed. 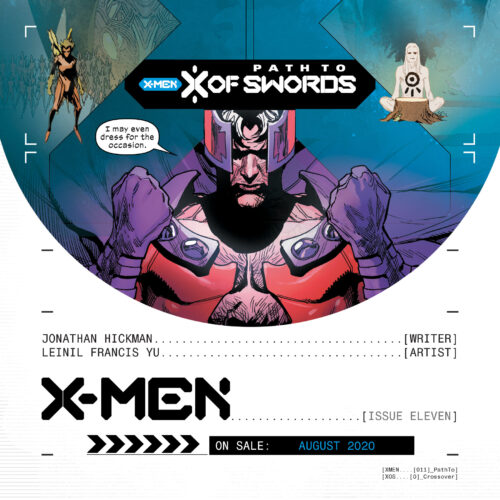