All BOOM! Studios had to say was Al Ewing and science fiction epic. That’s what Ewing has been doing over at Marvel, taking the Immortal Hulk from horror mystery to spiritual journey to hard futuristic science fiction to mind-bending challenges, all while still remembering that, oh yeah, it’s the Hulk. Cutting loose on an original epic is the step I wanted to see him take. With We Only Find Them When They’re Dead, I have a feeling we’ll be getting everything I love about Ewing’s work at Marvel, except without the Marvel characters. (No offense to them — love them — but I’ve gotten a taste for new, original concepts.)

I admit I don’t read any of the Power Rangers books, so I’m not familiar with the work of Ewing’s collaborators on this, Simone Di Meo and Mariasara Miotti. That just means I get to discover someone new to follow. We Only Find Them When They’re Dead #1 lands in comics shops on September 2, 2020.

BOOM! Studios today revealed a first look at WE ONLY FIND THEM WHEN THEY’RE DEAD #1, a new sci-fi epic from Al Ewing (Immortal Hulk), Simone Di Meo (Mighty Morphin Power Rangers) with color assistance by Mariasara Miotti and letters by AndWorld Design, about one man’s unrelenting quest throughout space to discover the truth—no matter where it takes him. Available in stores September 2, 2020. 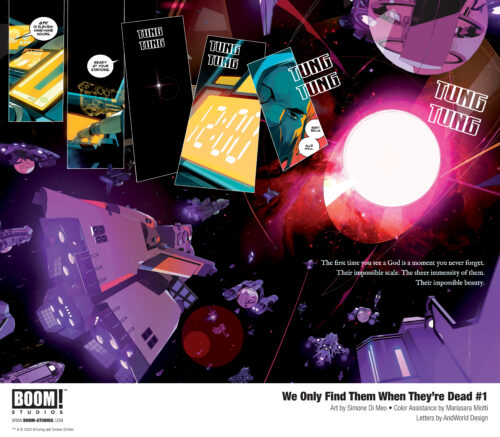 Captain Malik and the crew of the Vihaan II harvest resources from the giant corpses of alien gods found on the edge of human space. While other autopsy ships race to salvage the meat, minerals, and metals that sustain the human race, Malik sees an opportunity to finally break free from this system by being the first to find a living god. But Malik’s obsession with the gods will push his crew into danger at the darkest reaches of space—unless the rogue agent on their trail can stop them first… 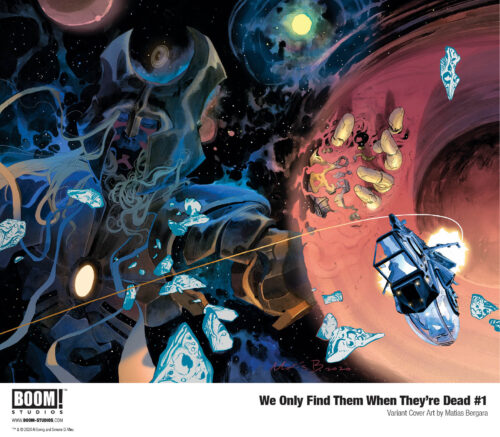