If you watched The Book of Boba Fett chapter two this week, you saw a wookie more imposing than Chewbacca. That would be Black Krrsantan, a disgraced exile from Kashyyk. As formidable a bounty hunter as Fett himself, there’s good reason for the two to stare each other down. Though he quickly exited so this chapter could devote more time to backstory, do not be surprised if/when he returns to be a major thorn in Fett’s side.

Never heard of Black Krrsantan? It’s because he’s never appeared in a Star Wars television series. Until now, he’s been strictly a comic book character. And if Wednesday you saw fanboys losing their minds, it’s because some of the best Disney-era Star Wars storytelling has been in Marvel’s comics, and now the promise of it all being connected has come to fruition.

It always was connected, as Marvel and IDW both presented tales that filled in backstory to the movies, or continued established characters. With Black Krrsantan, we’re seeing it go the other way. Created by Kieron Gillen and Salvador Larocca, the wookie debuted in Marvel’s first Darth Vader #1, standing alongside Boba Fett. Soon he became associated with Doctor Aphra, so far the only comics character to warrant her own series. Amoral and fun for largely sidestepping the Skywalker Saga, Aphra and her associates have been characters we’ve wanted to see transfer to television and movies. (They already appear in toys and games.)

We can hope Krrsantan plays a larger role in The Book of Boba Fett. The bigger hope? That Aphra follows. And where Aphra goes, she’ll be followed by her droid companions, Triple-Zero and Beetee, evil versions of C-3PO and R2-D2. Just as The Mandalorian served to spin out Ahsoka, maybe we should keep our fingers crossed for a Doctor Aphra Disney+ series.

More importantly, if Black Krrsantan can jump from comics to live action, can Jaxxon be far behind? 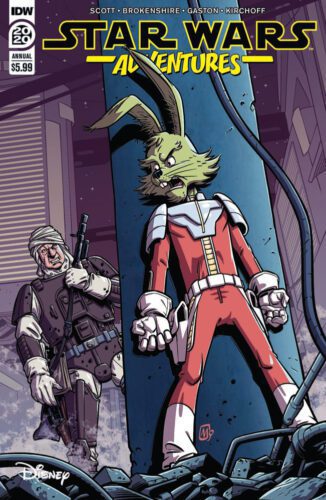 Fanboy Planet has an affiliation with Amazon. Purchases made through links on this page and on this site may result in a small bounty.