It wasn’t intended to be a continuation of Justice League Unlimited. If you don’t want to believe it is, that’s just fine. But it looks like it and sounds like it, bringing in the animated Trinity of George Newbern, Susan Eisenberg, and, of course, Kevin Conroy to voice Superman, Wonder Woman, and Batman. Thus Justice League vs. the Fatal Five can be considered a comfort movie, though it’s also moving forward to address the concept of legacy (so vital to the DC Universe). Maybe more importantly, it uses the excuse of the Fatal Five’s mission to wrestle with issues of mental health with its two “new” focus characters, Star Boy (Elyes Gabel) and Jessica Cruz (Diane Guerrero).

Opening 1,000 years from “now,” three out of five fatals storm the headquarters of the Legion of Superheroes. Attempting to capture a time bubble, they’re temporarily stopped by Brainiac 5 (Noel Fisher), Saturn Girl (Tara Strong), and Star Boy. The more Star Boy exerts himself, however, the longer he’s keeping from taking his medication, and things are worse when he follows Mano (Philip Anthony-Rodriguez), Tharok (Peter Jessop), and the Persuader (Matthew Yang King) back into the 21st century. Separated from his team and confused by what has happened, Star Boy only remembers that he must “find the Limelight.” 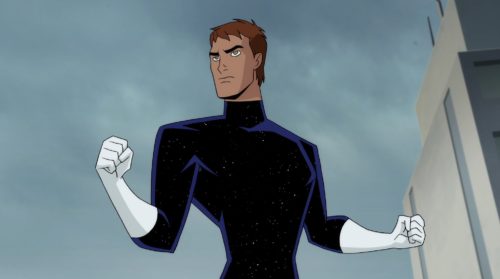 Enter Jessica Cruz, agoraphobic and anxious due to a traumatic incident in the past, but still currently serving as Green Lantern while John Stewart and other Lanterns are busy on a space mission. She’s been ignoring summons from the League while reluctantly going to therapy. While Star Boy — aka Thomas Kallor — rests in the cleanest version of Arkham Asylum you may have ever seen, Jessica just wants to hide in her apartment in Portland, Oregon. But the Fatal Five have other plans…

Overall, the film is a treat, blending familiar characters with new. Comics readers may notice that Jessica’s arc is a lot like how Kyle Rayner was treated in the 90s, but that’s happening with her in comics as well. For those who only know the characters through animation, she’s refreshing, and in both the script by Eric Carrasco and Jim Krieg and the performance by Guerrero, Jessica provides a welcome human portrayal of struggling with anxiety. She’ll be the key to connecting with Star Boy, whose schizophrenia could be well-managed by 31st century treatments that just don’t exist yet. Through him, the story makes a point that being a hero is more important than being super.

All the performances click, and it’s nice to briefly hear executive producer Bruce Timm as Two-Face. At this point, the Trinity could do this in their sleep, but they don’t. It’s very clear that all three actors love and appreciate the opportunity to play these characters. Let us shout to Wes Gleason for continuing a long tradition of great casting and vocal direction. 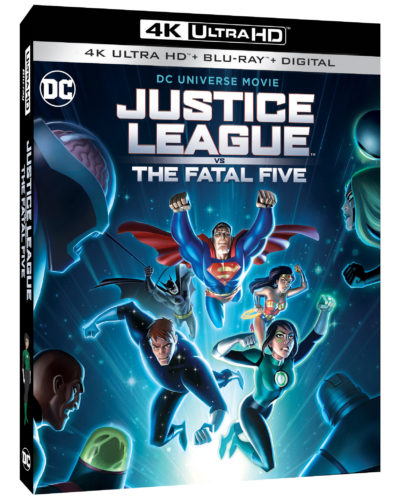 At WonderCon, Timm did say that if this film does well, they may return to this version of the Justice League. In particular, it would be nice to see J’onn J’onnz interact with Miss Martian, brought to life here by Daniela Bobadilla. Her interactions with Conroy’s Batman are fun (and much of that does rely on Sam Liu’s direction), but we need an answer as to her relationship with the Martian Manhunter.

Available digitally since Saturday, March 30, and coming to DVD on April 14, Justice League vs the Fatal Five make a nice (hopefully) relaunch of not just characters we love, but the portrayals we love as well.