Writer/Director Greg Pak had been kind enough to let me interview him on his outstanding feature film Robot Stories. When news of Pak, along with artist Charles Adlard, reviving Warlock for Marvel Comics came across the news desk at the Fanboy Planet office, we went back to one of our favorites and asked him a few questions on his next big project.

Fanboy Planet: You’ve gone all Kevin Smith on us and are now writing Warlock for Marvel. How long have you wished to live the fanboy dream? Are you just using this run as a way to get Marvel to let you direct Spiderman 3?

Greg Pak: It is indeed a lifelong dream. I’ve been a comics fan and a cartoonist almost as long as I can remember — somewhere in my parents’ house there are two comics I drew at the age of three or four — the first starring Superman and the second involving a lonely dragon who “went electric.”

Over the past year, I’ve been working with various editors at Marvel trying to find a project that would click with me as a writer. It’s incredibly exciting for me to have it all actually happening. And yes, I requested that the Spiderman 3 clause be added to the contract, but I’m not sure it made it into the final draft.

Fanboy Planet: So, Adam Warlock is one of those old school characters that seem to be popular for revival right about now. What’s your take on him?

Greg Pak: Cory Sedlmeier, the Marvel editor I’m working with, had this great idea of taking Warlock back to his almost-forgotten origin way back in Fantastic Four #66 as the creation of a team of mad scientists who want to save the world from self-destruction by establishing a utopian dictatorship. We’re starting with the notion that the scientists are trying again, and this time they’re determined not to let their creation escape them. 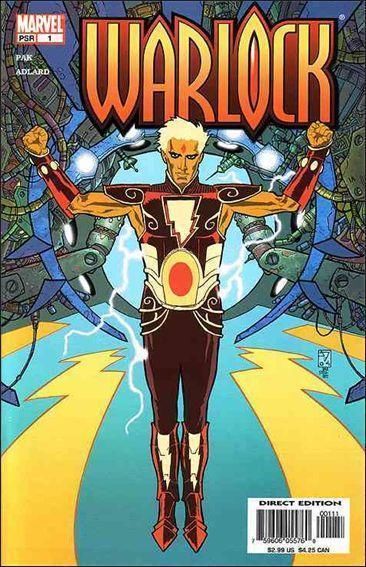 Fanboy Planet: How much of the previous Warlock material did you examine? What did you think of the Jim Starlin Warlock? Where are you going that’s different from that run?

Greg Pak: As a teenager, I read Starlin’s first Warlock run when Marvel did the deluxe reprint and enjoyed it hugely. In Starlin’s hands, Warlock was one of Marvel’s cosmic characters, having most of his adventures in a kind of mystic, metaphysical, outerspace world.

In contrast, the new book represents a kind of rebirth for the character right here on Planet Earth. He’ll struggle with the themes he’s always struggled with — primarily, the question of how even a “perfect” man handles nearly god-like powers — but it’ll be in a more real-world context, more science fiction than fantasy, if that makes sense. Hopefully, new fans will be able to jump right in while hardcore Warlock fans will enjoy the book’s new angle on themes which are vital to the character.

Fanboy Planet: What’s next for festival film favorite Greg Pak? Are we gonna see another film out of you anytime soon?

Greg Pak: I’ve been working on a short film for the Nike website which will should go live in the next month. Should be fun — got to work with special effects and flying aliens and other nifty wingdings.

And as always, my producers and I are trying to raise money for my screenplays “Rio Chino” and “The Dead Boy.” Wish us luck!