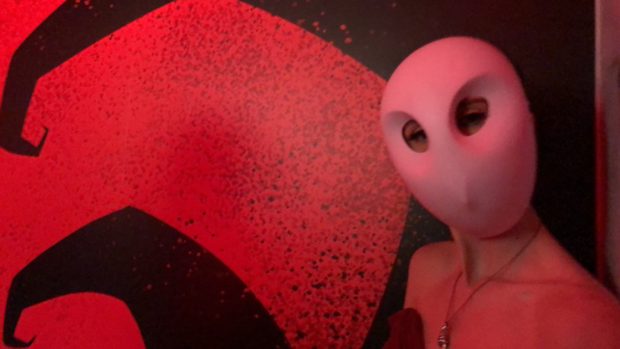 Whether under the streets of Gotham City or deep in the swamps of Louisiana, the DC Universe contains a lot of darkness. There’s a lot of light, too, at least potentially. But so far what we know for the upcoming streaming service DC Universe, it will be a struggle to get there.

To let fans immerse themselves in that struggle, Warner Bros. set up “The DC Universe Experience” at Comic-Con. An interactive exhibit (with long lines) built on the veranda of the Gaslamp Hilton, it offered tiny tastes of experiences related to programming promised on the service, due for launch sometime in the Autumn. Those were interspersed with costumes and props from DC TV and movies new and old — plus popcorn. 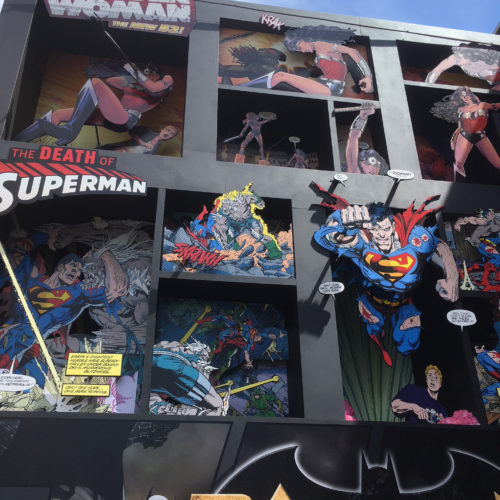 Visually dominated by what they called a 3-story comic book, attendees waited in the shadow of what might look like a carnival funhouse, except it depicted various stories covering DC’s “Trinity” — Wonder Woman, Superman, and Batman. Inside, however, was an experience lifted from Scott Snyder’s Batman — you had to get through an enclave of the Court of Owls.

Only lightly disturbing, it was still a fun experience. As Dan DiDio had said he wanted fans to be able to walk through a comic book, it worked. Maybe it was made easier by the Court of Owl masks, but the actors were extremely committed to it, and took their time intimidating.

From there, you could take a trip into Dick Grayson’s loft — a reasonable facsimile of the apartment we’ve seen glimpses of in this weekend’s release of the Titans trailer. Led in by a Gotham City detective, it looked like a crime scene, and attendees had to find the clues left behind by Grayson to lead them to his whereabouts. Though actually, it was to lead them to the same trailer for Titans, and Warner Bros. did set up a warning that this attraction would have language possibly inappropriate for younger attendees. You know the word. 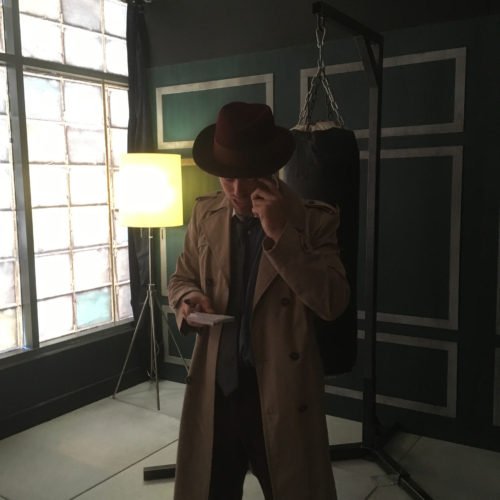 One open section contained three possibilities, with only one door. It felt almost like Indiana Jones and the Temple of the Forbidden Eye. But actually, three lines led to the door — either for “Harley Quinn’s Chaos Room,” “Young Justice Watchtower,” or “Swamp Thing Swamp Course.” 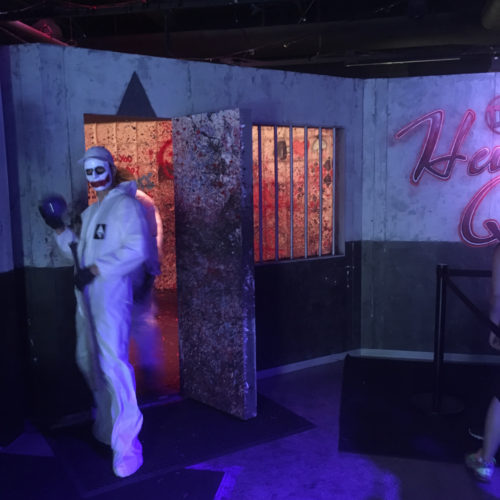 As a fan of Swamp Thing, I had to choose that one, and once inside, they forced us on the road less traveled by, or rather, stepping stones through the swamp instead of the well-built bridge. Thanks, cynical swamp guide. 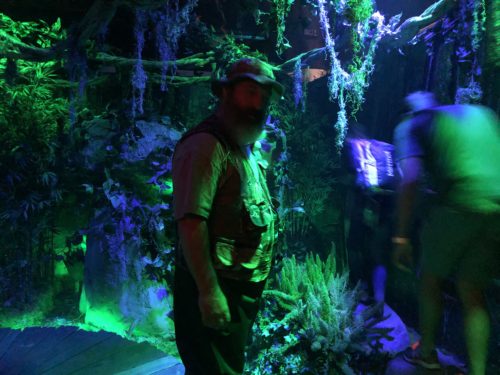 How else could we feel creeped out as we got tangled up in vines and disoriented in the fog, leading inexorably toward an encounter with some… thing?

Wisely, the course (and photo op) ends with none too clear a look at what has taken over the swamp. Though the Swamp Thing series is hotly anticipated by fans, it may not be far enough along to be sure what Swamp Thing will look like. At this point, best to leave him mysterious anyway. But on a weekend bookended by tributes to Swamp Thing’s creator Len Wein, this felt like an experience not to be missed. 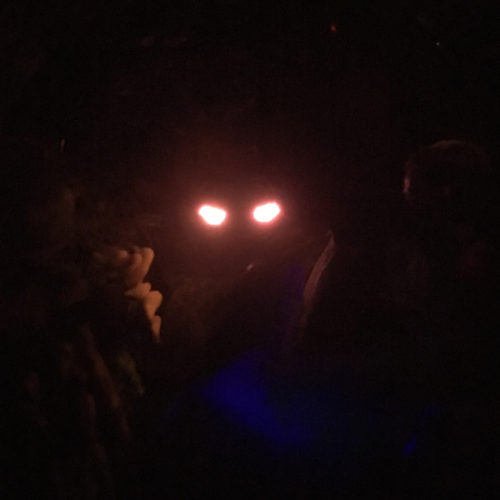 I may have heard the faint tones of Gilbert Gottfried, but that could have been my imagination. DC also had set up costumes from Titans, which look more impressive in the trailer. Following those costumes, however, leads to the biggest unknown of the DC Universe offerings so far — Doom Patrol. Since it’s really too soon to tell, DC Universe offered up something simply fun — while dropping clues to the series. The end goal was to get a deep frozen smoky popcorn by Nitropop. The resulting treat certainly seemed like something Niles Caulder would do as a prank. 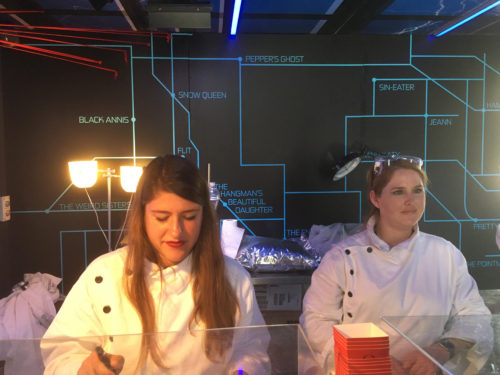 But behind the mad scientists welcoming you to this new level of molecular gastronomy were maps and charts that perhaps contained names important to the series. As it’s been stated that the Doom Patrol show will combine elements from the classic books and Grant Morrison’s magnificently loopy Vertigo run, the boards demanded close scrutiny — and in one corner, there stood a mannequin that may have represented Larry Trainor, Negative Man. 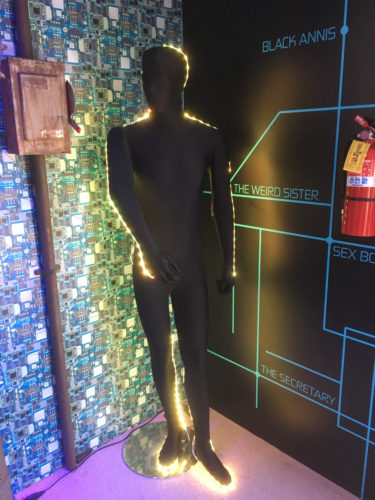 But of course, we can speculate all we want. To find out the answers, we need to subscribe to the DC Universe streaming service. You can pre-register now, and DC Universe had a kiosk by the exit to give you the chance then. To do otherwise would have been madness. 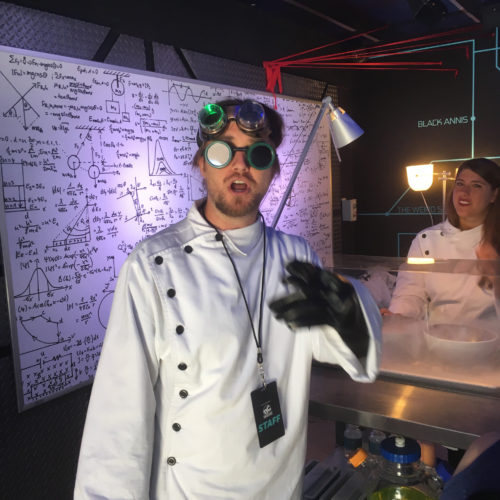