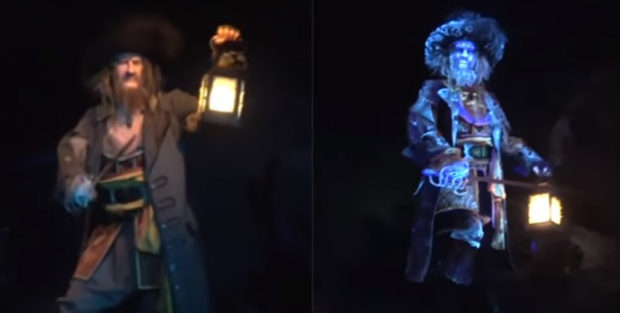 Tomorrow, Disney draws tens of thousands of fans to the Anaheim Convention Center for the D23 Expo. It’s all the glitz of Comic-Con but with the key difference that everything — EVERYTHING — is a Disney property. (After noon tomorrow, that includes Stan Lee and Jack Kirby.)

We know that there will be a large exhibit celebrating Pirates of the Caribbean in all its forms in all the parks worldwide. A couple of weeks ago, Disney caused a stir by announcing there would be changes in the venerable attraction, one of the last that Walt Disney worked on in Disneyland. After 50 years, the “bride auction” scene — admittedly, a human trafficking scene — would be altered, with the key figure known as “the redhead” altered from object to pirate herself.

At present, it sounds like those changes will be made to the Disneyland Pirates attraction in 2018, but Disneyland Paris got a jump on it. Thanks to a couple of Disney fans on YouTube and Twitter, footage has been posted at InsideTheMagic.net. It’s not just The Redhead (if there’s a Pirates of the Caribbean 6: Yo Ho Ho and a Bid for More Cash, let’s make her a central character to help justify the change). She’s been given a gun, the women in line have been replaced by more comedic pirates, and in the scene following, another there’s a duel going on between a townswoman and a pirate. I kind of like that. It’s in French, so I have no idea how the dialogue justifies it all. And there’s still more…

Check out the new Barbossa figure — somewhat along the lines of the effect at the Shanghai Disneyland Pirates attraction with the Davey Jones figure.

Will this figure be added to the Anaheim version? Perhaps we’ll find out this weekend.