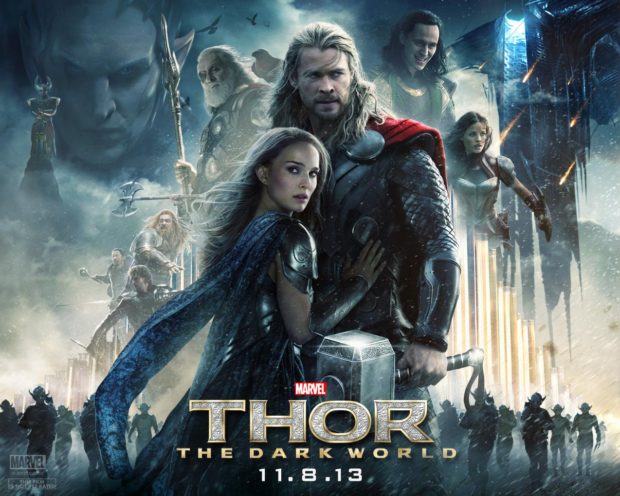 Long ago in the Nine Realms, the Dark Elves sought to destroy reality as we know it, barely suppressed in time by the Asgardians. And wouldn’t you know it? Though Odin’s father claimed to have destroyed the Elves and the Aether, an anti-matter like plot device, he lied and just buried them all really deep.

And of course, mortal woman Jane Foster (Natalie Portman) continues the research that would have led her to Asgard in the first Thor. But this time it leads her to… wherever that plot device is buried, because then it moves things forward. She teleports in and out of the only place that Director Alan Taylor never bothers to label.

Whatever it takes to bring all the characters back from the first film is what a team of writers do to make Thor: The Dark World work. And so it doesn’t so much work as stumble along for a while, pointing out the sites we all thought we wanted to see again.

That works well enough at first, refreshing our memories of a pretty rich cast. Unfortunately, it also trusts that those memories will do the work of actual character development. Taylor does not have a point of view on them as sharply defined as previous director Kenneth Branagh did. 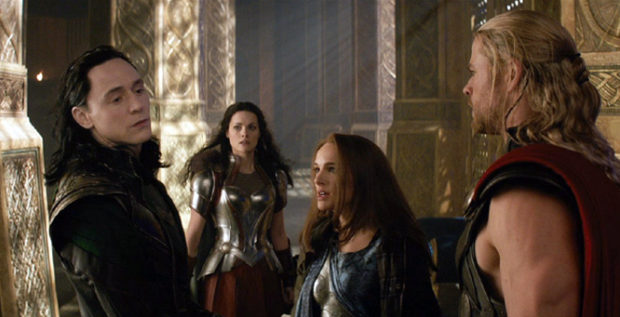 So Anthony Hopkins can chew scenery as Odin, but not really have to reflect the inner pain of shaping his heir. Portman can just be Portman and let the plot flow around her. And Kat Dennings can just drop a bunch of smart-aleck remarks at times both opportune and jarring.

The Dark World, or rather, the desire of the Elves for a return to nothingness, is just a macguffin, grinding everything in its path. Malekith (Christopher Eccleston) cannot even be bothered to change expression; he just wants Darkness to prevail.

Leave it to Loki (Tom Hiddleston) to throw a wrench in the works. Ostensibly being punished for his actions in The Avengers, Loki is imprisoned for all eternity in the dungeons of Asgard. It’s the first moment the script spends stressing that these are not gods, just long-lived superbeings.

Taylor takes that as a cue to lose the sense of awe. Thor may have always been science fiction masquerading as quasi-Shakespearean fantasy, but the director cannot be bothered to make the mask ornate this time around. He helms a straight up science fiction movie, and it’s by the numbers.

It hurts Heimdall (Idris Elba), who no longer seems foreboding, though Elba still imbues him with toughness. But it does allow Rene Russo to humanize her role as Frigga, making her a recognizable mother, hurt by the actions of her adopted son but determined to love him anyway. Zachary Levi makes a case for more Fandral, given very little to do but turn on genuine charm in a movie that needs more of it to seem effortless.

But what of Thor himself? Without the steady point of view of a strong director, Chris Hemsworth just swaggers through the part, until he hits the wall of Hiddleston. Then the movie really snaps to life, as the two continue their difficult dance of possibly loving each other as brothers but trapped by their own natures.

And Hiddleston absolutely understands Loki’s nature. Though five different writers are credited with the screenplay, it’s been implied that Hiddleston really took the reins of his own character development, and having been a protege of Branagh, he keeps restoring that classical luster.

Still, the story keeps taking shortcuts, partially because it is simply sprawling through all Nine Realms. For that, Taylor does manage to keep a tight lid on things. At least we always know where we are. 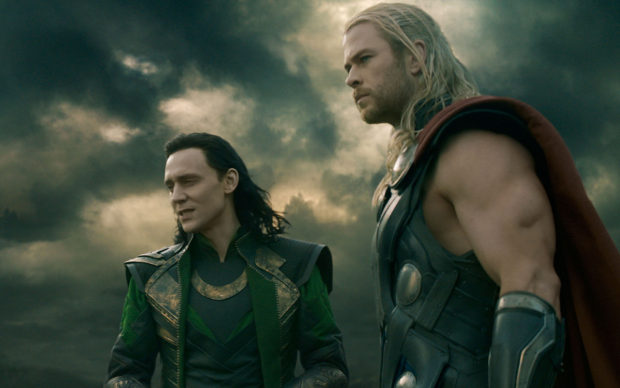 It’s also not just a place holder the way that Iron Man 2 felt. Thor: The Dark World does move characters forward, not just within the Thor mythos, but smoothly in ways that also propel the entire Marvel Universe along.

But it doesn’t have much personality of its own, either, until the mid-credits sequence that sets the tone for Guardians of the Galaxy. (Directed by James Gunn, and it’s obviously a separate piece from the rest of the film.)

Should there be a third Thor? It would still be fun, because even defined as a technological marvel and not a realm of the gods, crossing over that rainbow bridge of Asgard cannot be stripped of all its wonder. Thor himself is now stolidly heroic in a way that’s kind of comforting, and there’s still so much potential in the Warriors Three (and Sif).

Plus, after Guardians, the possibilities of plot elements to borrow from comics could be mind-boggling. Beta Ray Bill could come in, introducing the truly alien to the Nine Realms. Or better yet… Frog Thor!