Their historic match at Wimbledon changed both men forever. At least, that’s what Borg McEnroe would have you believe. It’s a sports cliche, a sports movie cliche, and that doesn’t mean it couldn’t be true. But the problem with leading off a movie with a thesis statement is that you have to actually prove it.

Within minutes, Janus Metz’s film tells us everything we need to know about the characters aside from their statistics. Bjorn Borg (Sverrir Gudnason) feels the whole world watching his every move as he prepares for what could be his unprecedented fifth Wimbledon trophy. Over in the United States, tennis bad boy John McEnroe (Shia LeBeouf) is both being positioned to unseat Borg and berated for being the brat in “a gentleman’s sport.”

As the script by Ronnie Sandahl plays out, we see that the two men are not so different after all, but Borg has a coach (Stellan Skarsgard) who helped him tamp down the passions on the court that might have otherwise destroyed his career. Borg appears to be a machine; McEnroe appears to be a jerk. Both just want to play tennis. Don’t worry — Metz at least spares us a (fictional) scene of the two bonding over a tennis game out of the sight of the public. 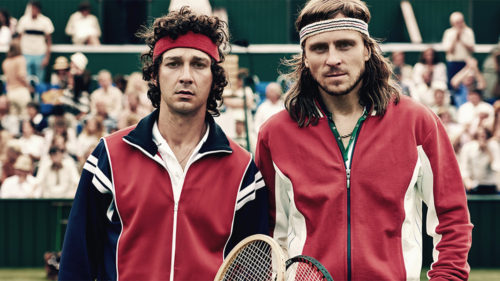 Instead, he just paints the faintest of pictures of these men and their motivations. The film jumps back and forth in time to their childhoods and their training, but never quite makes the case for why they tick the way they do. As an adult, Borg is almost OCD in his superstitions, and perhaps that’s part of his staying under control — but can that really be pinned on one thing his coach said to him about his behavior on the court? On the other hand, it’s clear that McEnroe has a deep-rooted childhood fear of disappointing his parents but none of that plays out in LaBeouf’s scenes with Ian Blackman as his father. They seem to actually have a really good relationship.

So the tension never builds, though Borg McEnroe does finally take off when it comes down to the two men facing off on the tennis court. There Metz makes the case for a pretty stirring sporting event, and perhaps ultimately McEnroe learning to be a good sport (though, let’s face it, he really wasn’t). 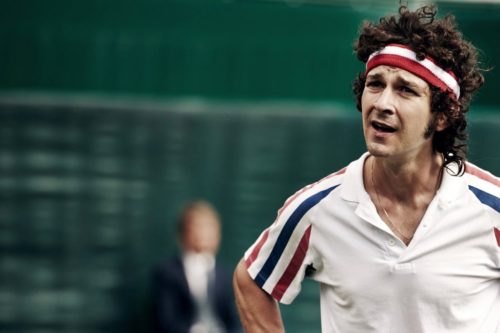 It wouldn’t work without all the baggage LaBeouf actually brings to the role; we may not really understand McEnroe’s wounds, but we see them written all over the actor’s face. It’s his movie to steal away from Gudnason, who has the thankless task of being fit and cold. Not even Skarsgard, one of the best actors working in film, comes fully to life here.

It also doesn’t help that this event was loosely parodied a few years ago in a vastly superior piece by Andy Samberg on HBO — 7 Days in Hell. That’s well worth your time; it’s hard to say that Borg McEnroe is.