As a child, Sam (Drew Fontiero) did a very bad thing. Or did he? Even if he did, does he deserve the strange hell he’s going through, even before he actually dies? Now an EMT, he suffers from headaches and blackouts, in which it’s possible a different personality steps in, but he can’t be sure.

Feeling alien in his own body, he agrees to join friends at a weekend birthday celebration — getting back to nature in a cabin in the woods. But this is not quite the horror movie that set up sounds like. Character gets revealed, reflected by Sam’s awkwardness. He’s not the only one with problems; friends Jay (Marc Menchaca) and Tyler (Tyler Dash White) have mental illnesses, too, struggling to cope in their own ways.

It could be that the three should just find a strong bond, helping each other out. But Sam makes a confession in one of his blackouts. Tyler finds out a different secret about him. And Sam ends up dead in the lake.

Except he just won’t stay dead, possessing his friends as he tries to protect them from his killer. With each leap, he also unravels deeper parts of repressed memories. It’s hard to know if any of this is real, or if this is an elaborate hallucination. The unpossessed certainly don’t know.

Every Time I Die has a pretty slow build, but the rhythm matches Sam’s sense of disconnection. Stick with it — the pacing gets faster as the mysteries unravel. (And the mystery isn’t who killed Sam.) From the beginning, creators Robi Michael and Gal Katzir make sure the audience doesn’t quite have its footing. They may be playing a bit with the timeline, but only to reflect Sam’s state of mind.

And they play with reflections — a point of view from a mirror, a camera lens, or the mind’s eye. As a child, Sam was obsessed with photography, and yet he has trouble putting the picture together.

The actors do a good job of reflecting the confusion anyone would have in this situation. Fontiero has the most thankless job, having to stay mostly blank, though every now and then a flash of his desire to connect seeps through. It’s only after death that he’s really able to express it, and the other actors get to create more layers for Sam. Strongest are real-life sisters Melissa and Michelle Macedo, both playing wives to damaged men and trying not to let the damage overwhelm them. And, of course, there’s more to it than that.

The film is a psychological philosophical thriller, and to be honest, I’m not quite sure the psychology all added up for me. But it’s interesting, and what I look for at Cinequest are these kinds of smaller, interesting features that dabble in my wheelhouse and test the boundaries of it. Every Time I Die does that. 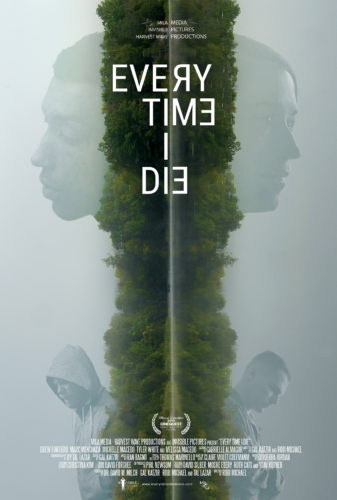 Every Time I Die premieres Friday, March 8 at 9:50 pm at the California Theater. For more information, further showtimes, and tickets, click here.