We struggled across a convention floor so thick with attendees we expected to see Charlton Heston running across it screaming “Convention Green is made out of people!” At each logjam of people, usually caused by a booth babe, one question burned in our minds: “Can Kevin Smith be topped?”

Well, yes and no.

Today, Hollywood invaded. Though no line grew to Smithian proportions, many great presentations happened. The smaller auditorium hosted a forbidden episode of Futurama, followed by a brand-new episode of Space Ghost: Coast To Coast as a preview of the Cartoon Network’s new Adult Swim block of programming. Call it the room of cult-followings, as the cast of Mr. Show also made an appearance. 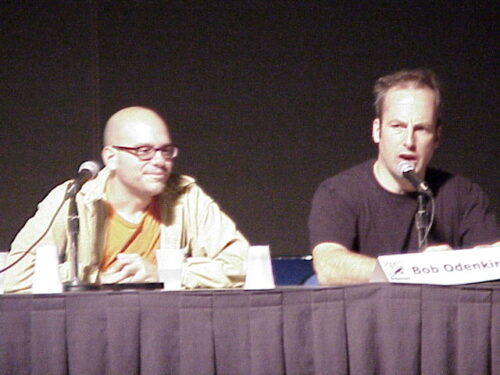 Just next to that, the main auditorium remained jam-packed all day long. Warner Brothers unveiled their upcoming slate of genre-related films, though the big disappointment was that no one appeared from Harry Potter And The Sorcerer’s Stone. Intending to talk about his Dark Horse comic Fray, Joss Whedon ended up dancing around next season’s Buffy resurrection. Will The Black Racer be involved? What about Aquaman’s resurrection, huh? It’s just not fair.

To promote Planet of the Apes, Fox brought in actor Cary Tagawa, who gave Fanboy Planet an interview that we’ll have up before the movie opens next Friday. New Line gave a short presentation on The Lord of the Rings, while Frodo Elijah Wood snuck over to see the Mr. Show antics. A mysterious sounding Star Wars program also occurred, but no word yet on whether or not Lucas allowed any new information to leak. We can tell you this much: Mara Jade is not in Episode Two. Neither is anything remotely resembling deep characterization.

Two big bombshells dropped today, one in film and one in comics. Director Sam Raimi made his first ever (and extremely nervous) convention appearance, and after fielding a few questions, showed a full five minutes worth of Spider-Man, a scene depicting Peter Parker getting that spider bite. It looked great. Fans who feared this film, exhale. Fans who love comics adaptations of movies, however, might have reason to shake. Stan Lee will write the book with art by Alan Davis. But that’s not the real news out of Marvel. 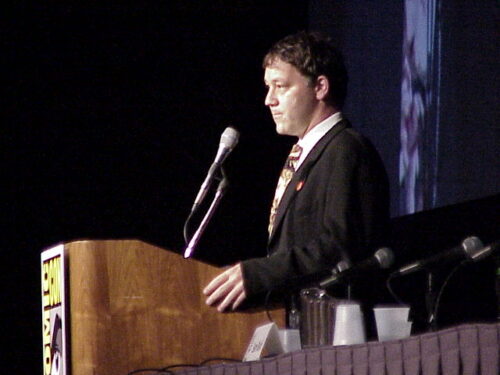 Halfway through Marvel’s editorial slideshow, a commotion occurred at the podium. The lights came up to reveal Kevin Smith, who lovingly berated Marvel Comics for sucking. Only one thing could turn the company around, he said, and that would be if they allowed him to write another book for them. Joe Quesada teased back, in an acting job no less impressive than his role in Jay And Silent Bob Strike Back. After mutual ribbing, the two announced that Smith will return to Marvel, and within six months will release The Black Cat. No artist has yet been determined, but Smith doesn’t care. He’s out to prove that he can make a second-tier character into a fan favorite.

But will she look good on next year’s convention t-shirt? 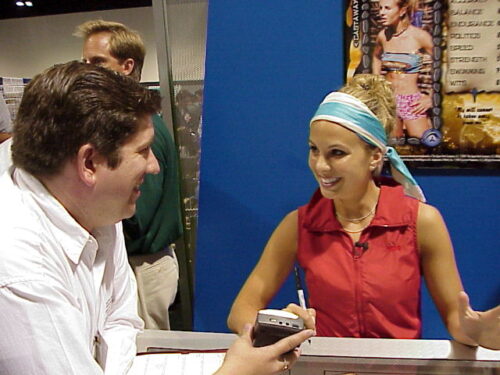 Tomorrow: Day Four? Nope. We went home. But we’ll start writing up articles on some of the symposiums attended, movies seen, and celebrities spoken to, including the woman we’d most like to help us survive the Australian Outback. What was Elisabeth doing at the convention? Not even she really knew.