A to C can be found here.

D to M can be found here. 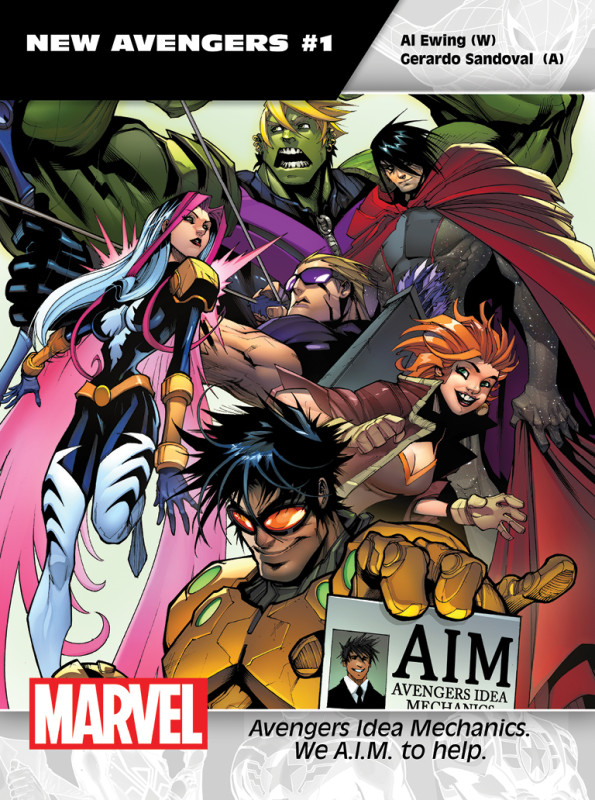 It looks like some Young Avengers mixed with some old Avengers with some Thunderbolts.

This could be fun.. 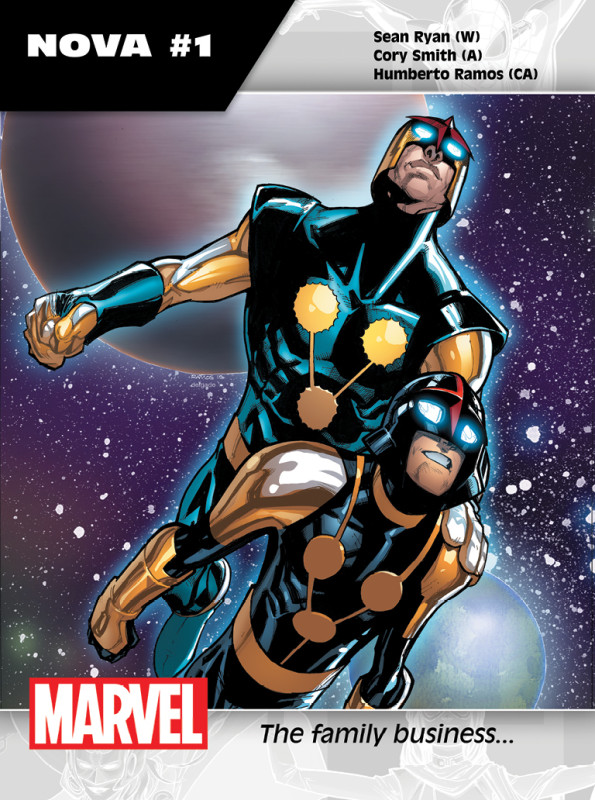 Ric Bretschneider raved to me about the new Nova as a character. He’s right. Marvel, keep it up as a family friendly book that’s full of spacefaring adventure… 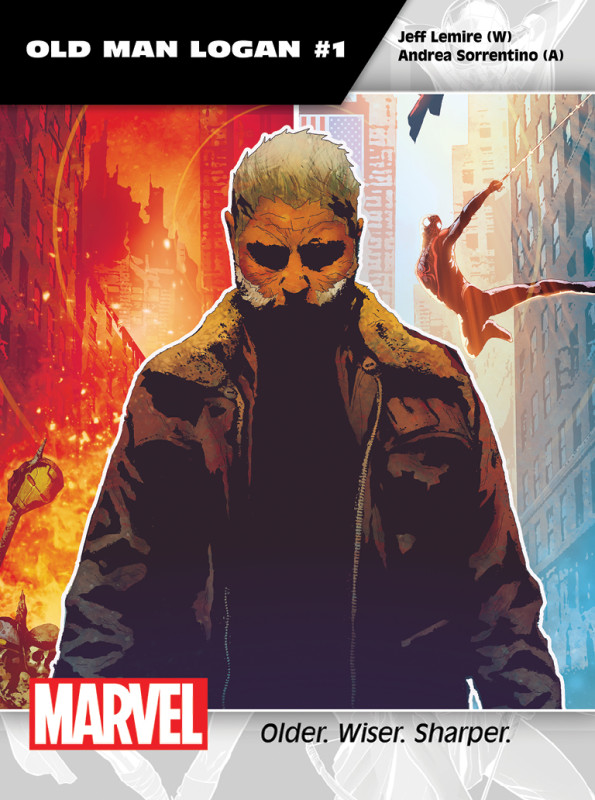 Jeff Lemire is a great writer, but are people more into “Old Man Logan” the story by Mark Millar, or did they like the concept of the character? 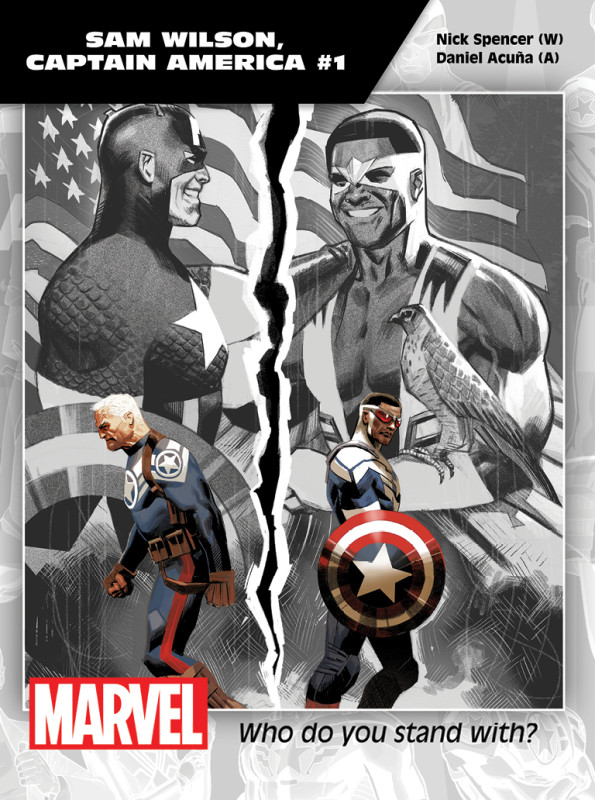 I love the idea that Sam Wilson remains Captain America. But I don’t love that he and Steve Rogers have to be at odds in order for it to happen. This cover feels a little too much like a sequel to Civil War.

Plus side, Daniel Acuna’s artwork is gorgeous. 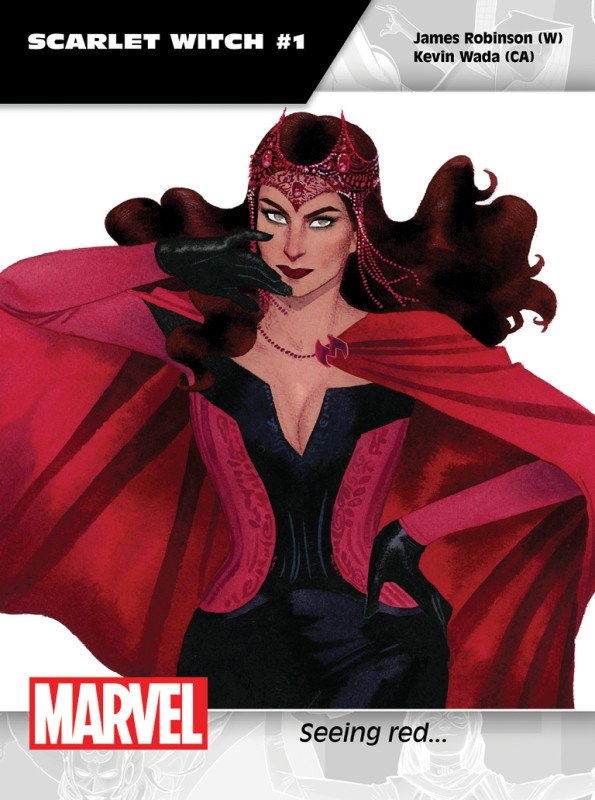 James Robinson is on the book, so it’s worth picking up. But what’s going on with the character, I have no idea.

Maybe this is where Jim Hammond will show up, since she did used to be married to the character who everybody thought had Jim Hammond’s body.

Really, that made sense in my head, and in the head of anybody who has been reading Marvel since the 70s. 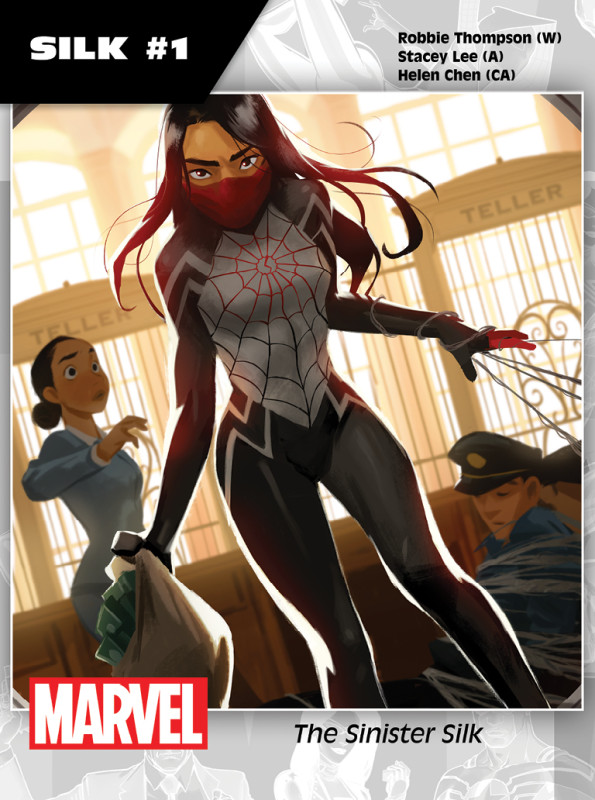 More diversity in the Marvel Universe is a good thing, and while Silk didn’t quite break out the way that Spider-Gwen did (and Marvel expected the opposite to happen), it was a solid seller before Doom hit.

It’s worth giving a relaunch and seeing what will happen when more of the general public is aware there’s this great jumping on point. 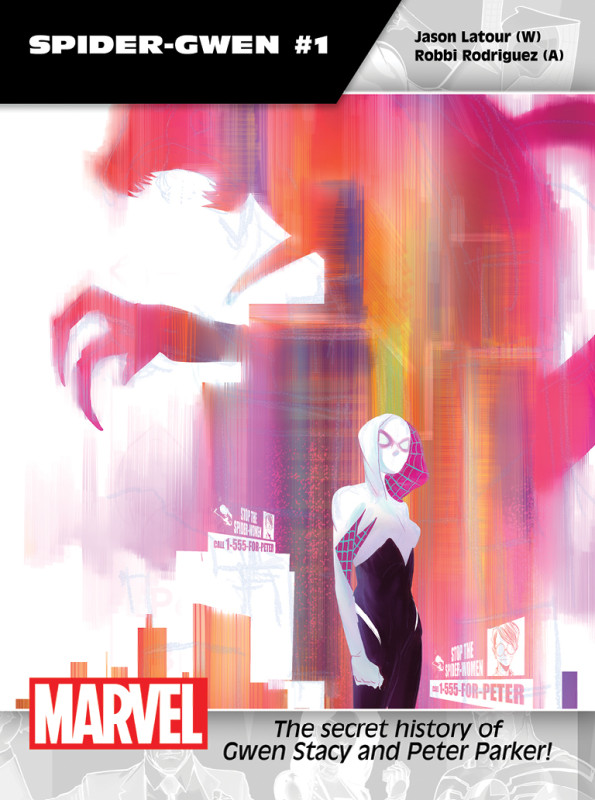 Restarting the origin but maintaining the previous creative team, this can only be a good thing. And Gwen is staying in her own universe, unencumbered by any other continuity except when she is called in to fight in the Spider-Verse.

As it should be. 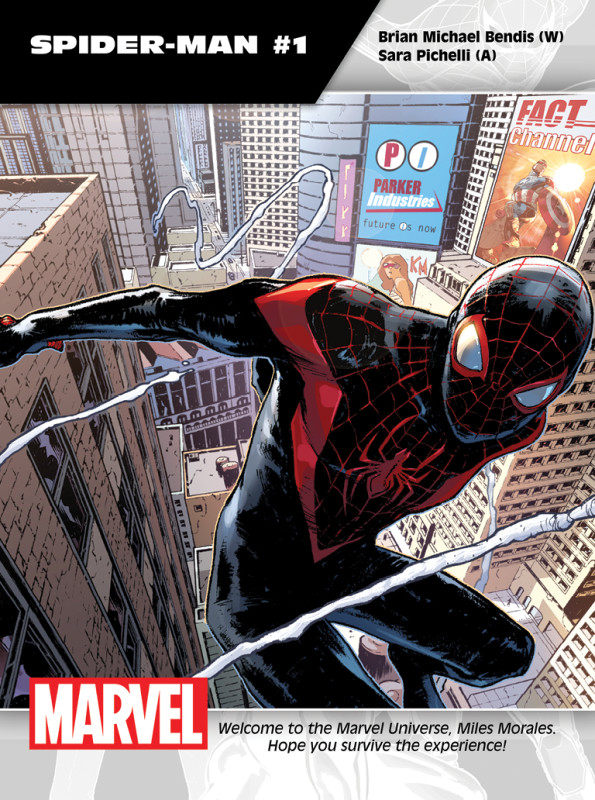 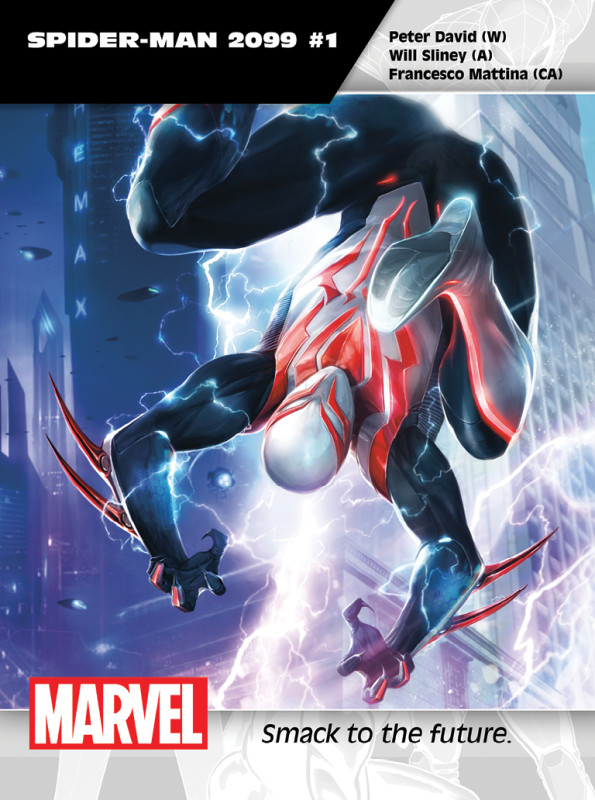 But Spider-Man 2099 continues to be written by his co-creator, Peter David, who isn’t writing nearly enough comics. So huzzah!

Let’s give it a shot… 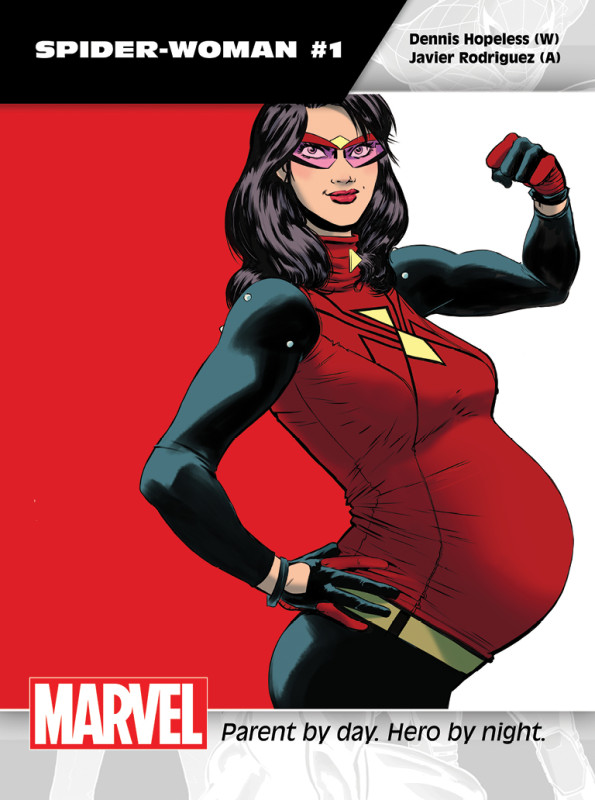 Taking a completely different tack on a heroine that needed one to stand out from the crowd of Spider-Men and Spider-Women, Spider-Woman wins for the cover.

Now will the interiors be worth it?. 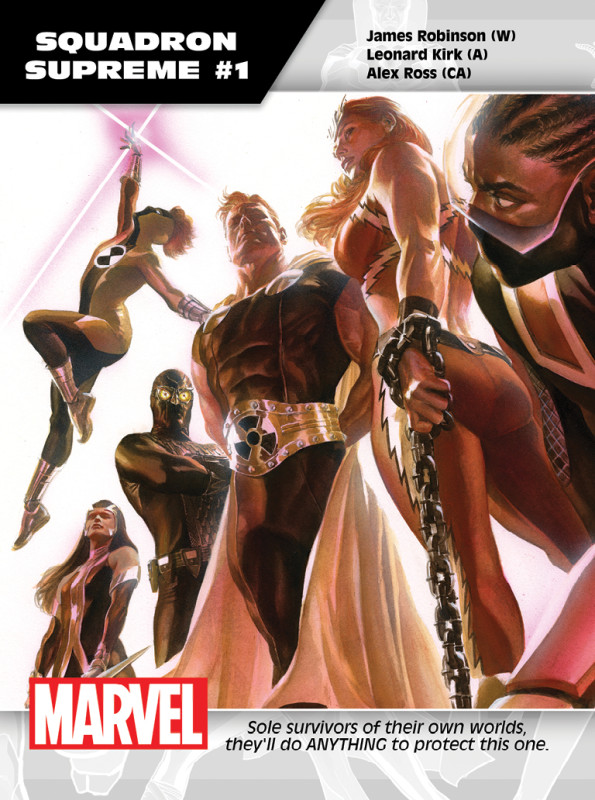 James Robinson and Leonard Kirk collaborated on a great Fantastic Four run. Will this continue on a dark take on the Justice League for Marvel?

This seems more likely to be a mini-series, as every other Squadron Supreme book has been. 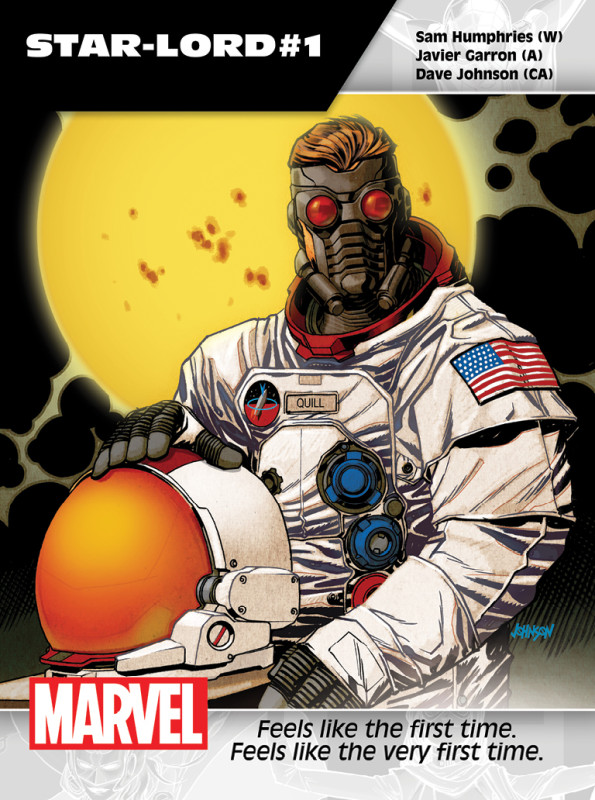 Marvel owes a great debt to James Gunn for this ’70s pop side to Star-Lord.