If you get to your comics shop this week — and of course you will — you may be handed an issue of All-New, All-Different Previews of what Marvel has in store for us in October. Some of the titles featured have already been announced — some you can find right here on Fanboy Planet!

And it’s all part of Marvel’s grand plan for Comic-Con. You can bet that next week people will be buzzing about these books… and more. Marvel Studios might not be bringing Captain America, but it’s good to see a company remember that at its heart, Comic-Con is still about comics.

“Dropping the mic right before San Diego Comic-Con has become a Marvel tradition,” said Marvel Editor-in-Chief Axel Alonso in Marvel’s press release this morning. “The ALL-NEW, ALL-DIFFERENT MARVEL PREVIEWS magazine provides a large snapshot of what’s to expect in the fall: new characters, new teams, new wrinkles for our heroes, and most importantly, fresh creative directions. And we’re just getting started. We have a few more aces up our sleeves.”

That may be. So why don’t we take a look at the aces they’ve dropped on the table? 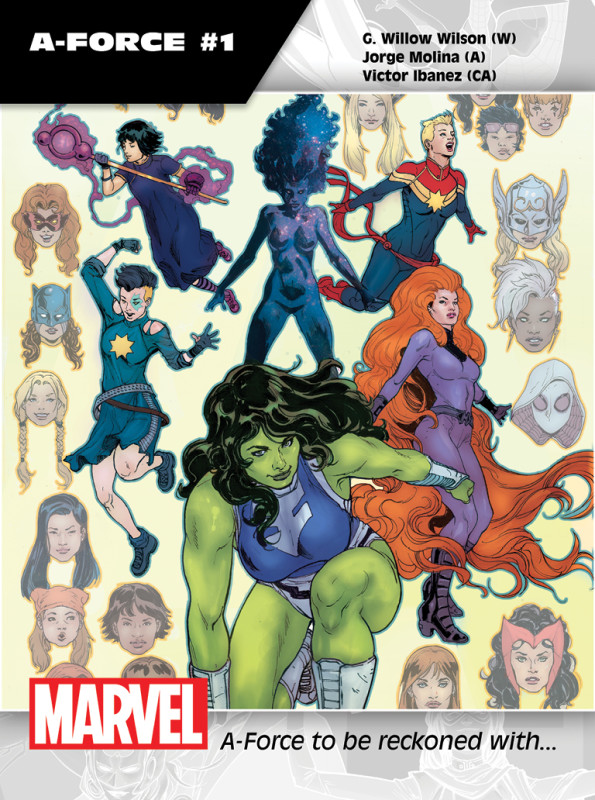 Marvel announced the return of  earlier, and it’s a book that garnered a lot of attention when it was first announced before Secret Wars.

G. Willow Wilson, co-creator of the new Ms. Marvel, has the chops to not only make this a compelling ongoing, but I have it on good authority that her take on Dazzler — yes, Dazzler — is amazing. 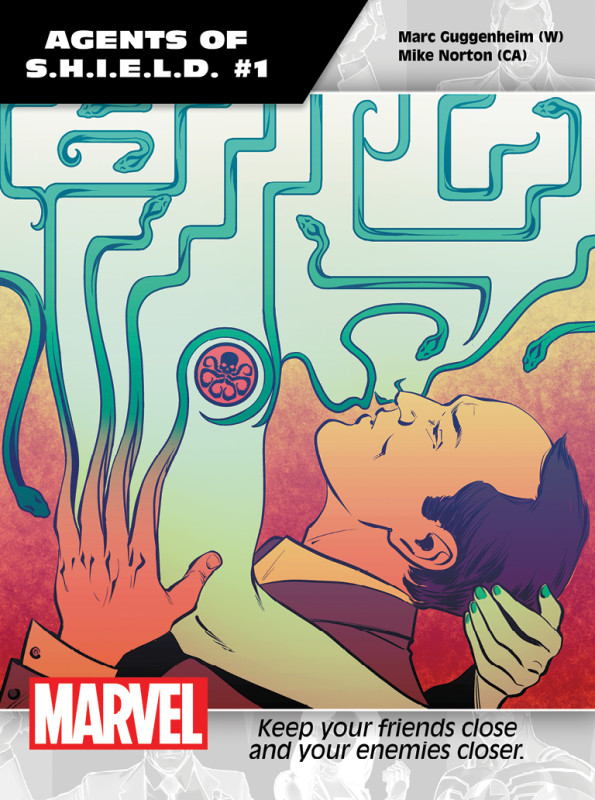 Agent Coulson kissing up to Hydra?

Though some have groused about the changes made to Coulson so that he could more closely resemble actor Clark Gregg, it’s welcome. Not just so that fans of the show can walk into a comics shop and recognize something they like, but also because the movie and TV version of Phil Coulson is kind, gentle, and decent — and still kicks ass as a (relatively) normal human among superbeings. 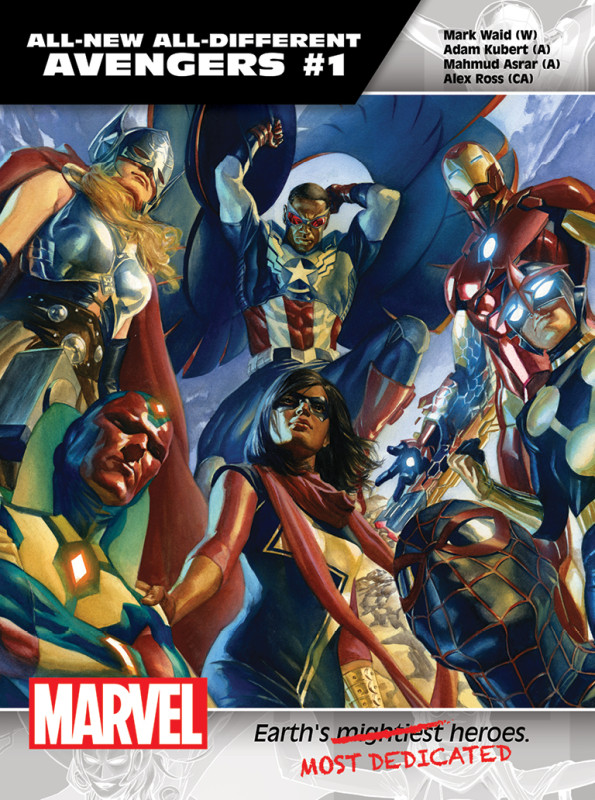 This book, too, was leaked earlier, and like A-Force, shows that Marvel really has a commitment to diversity and inclusion. But it’s not pandering — these characters have become popular because they’re well-written, interesting, and fun to watch interact. 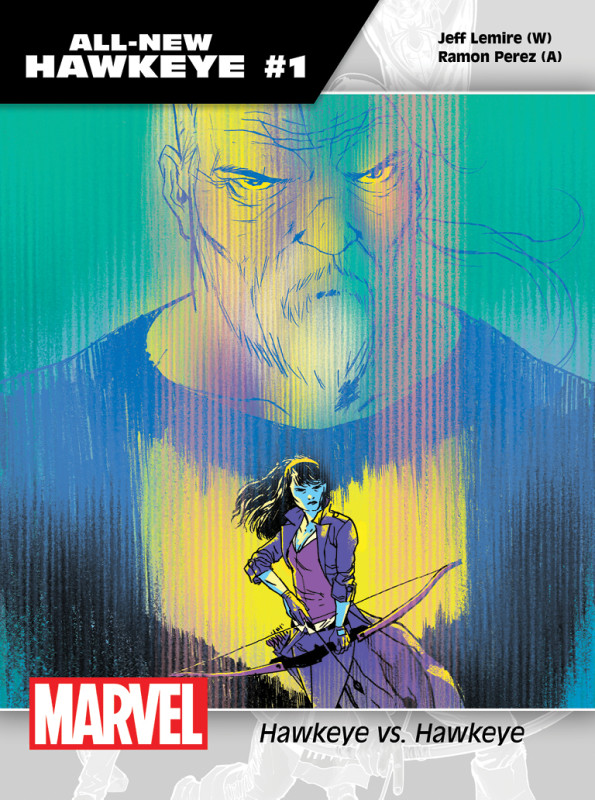 It looks like they’ve aged Clint Barton, a bold move considering how Jeremy Renner has made the character much more well-known. Pitting him against a younger woman for the right to be Hawkeye — it could be an interesting story. 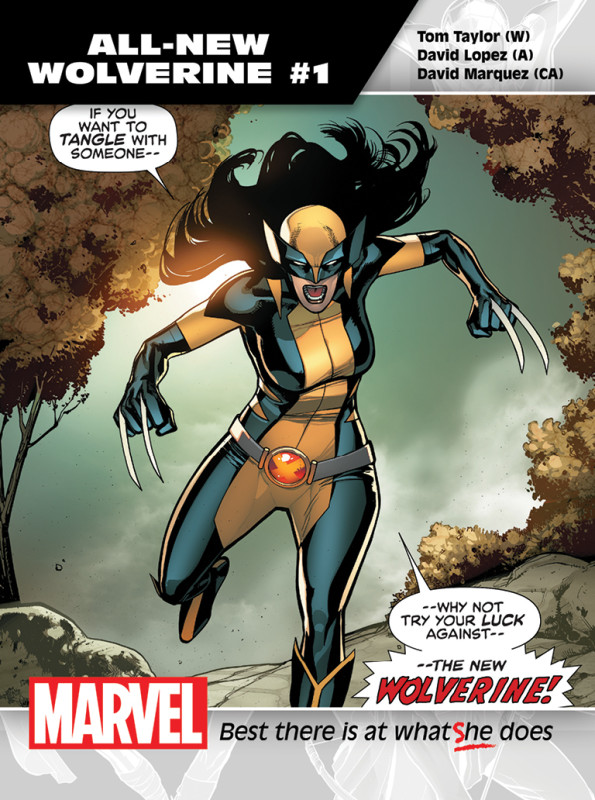 Rumored for a while, and a perfect solution to the mantle of Wolverine — it’s X-23!

Call her Logan’s daughter, his sister, Laura, or just call her Wolverine, the image has a classic feel to it. Could Marvel really be setting up the next generation and letting it stand? 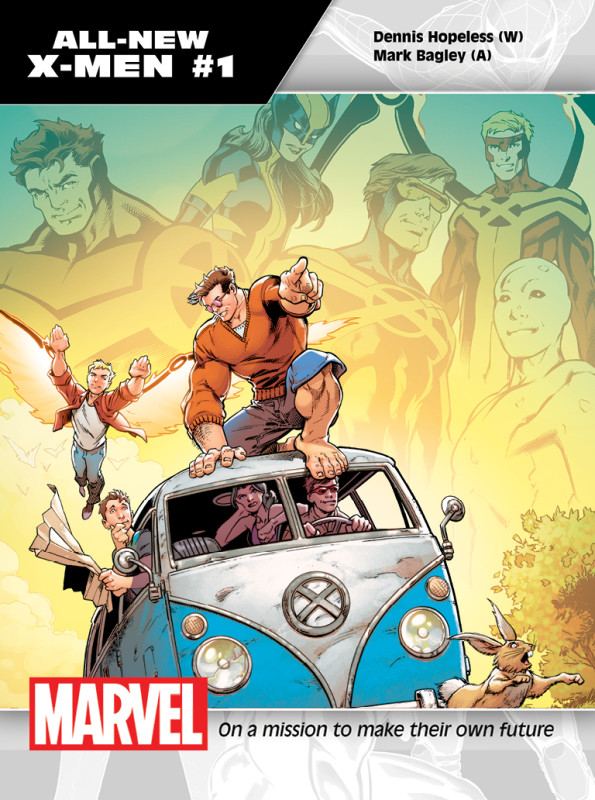 Perhaps it’s not a stretch from the Merry Pranksters to Marvel’s Merry Mutants… it’s interesting that while other previewed titles and rumors make it sound like most of the mutants have disappeared (again), this implies that no, at least the first five just want to find themselves.

And in a classic VW Bus, no less. Those things will run forever. Here’s hoping the book runs for at least a year. 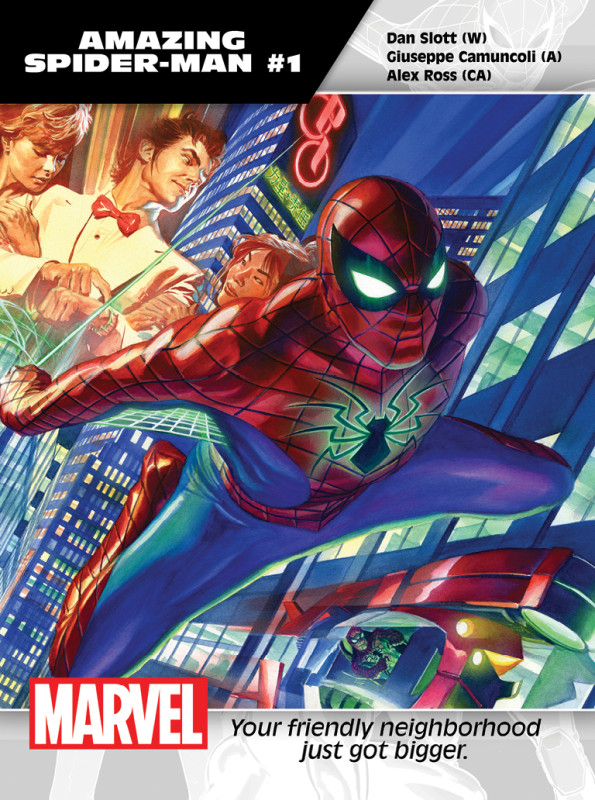 Ahem. We told you so.

Maybe that wasn’t you, but a bunch of people online panicking that Marvel was getting rid of the Spider-Man they knew and loved. There was nothing in Marvel’s announcement of Spider-Man that implied that Amazing Spider-Man was going to go away.

Nope. Instead it looks like writer Dan Slott will continue on making Spider-Man amazing. Maybe the Parker Luck has changed… 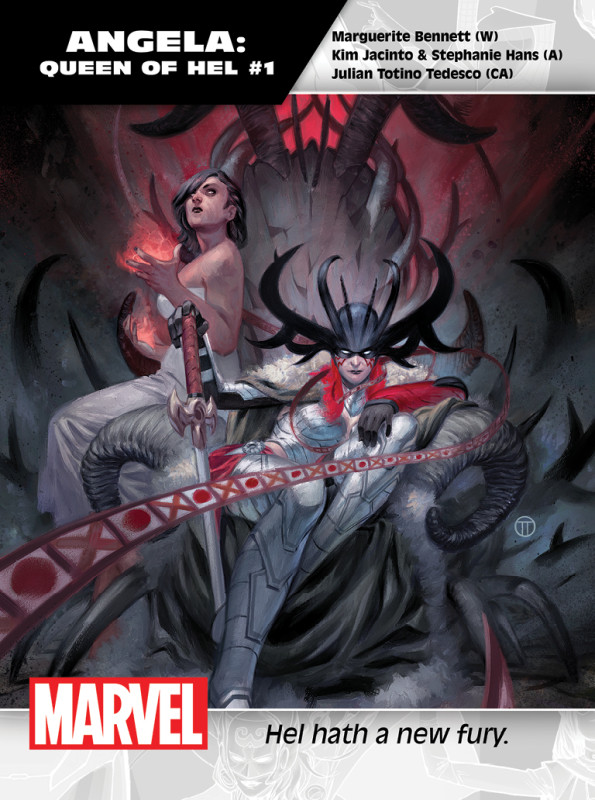 Not having read Angela: Asgard’s Assassin past issue #1, we have no informed opinion here.

But taking a character who started out as an “Angel” (for another company) and having her become ruler of Hel? Well, that’s interesting.

Marguerite Bennett is gaining a reputation as an interesting writer, and will also be handling Bombshells for DC. This may be worth picking up. 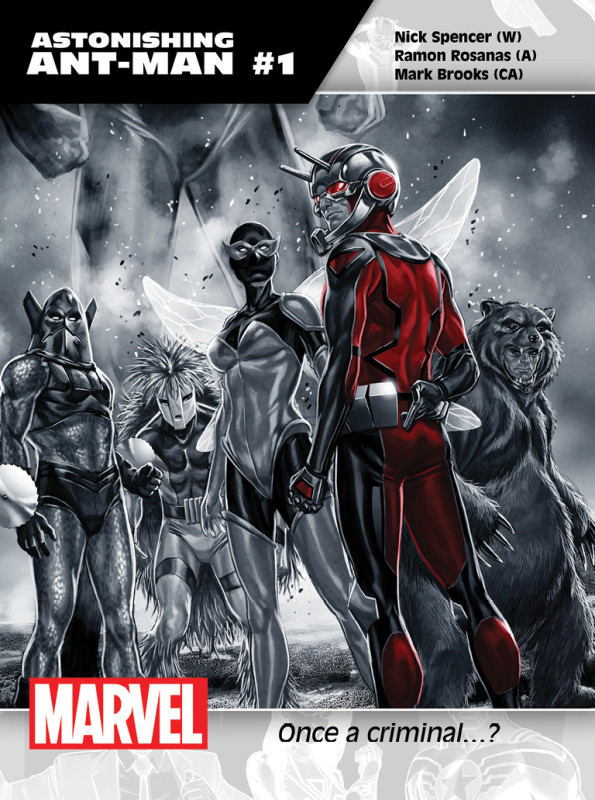 Oh, he won’t really be a criminal. But Scott Lang does have a criminal past, and the movie does show him with his old gang, so… why not at lest imply it?

The Grizzly has reformed and been working with Scott’s security company, Whirlwind escaped from Disney’s Big Hero 6, and The Porcupine… whoa… he’s still around?

Plus that looks like a dynamic new Wasp, so if the movie hits big — and it will — people will be checking out this book. Maybe it’s the good Ant-Man book Evangeline Lilly has been waiting for… 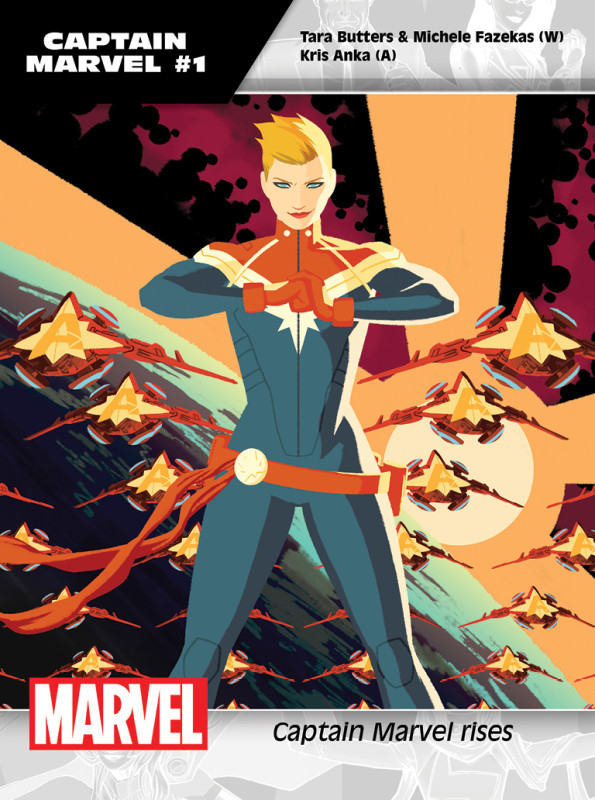 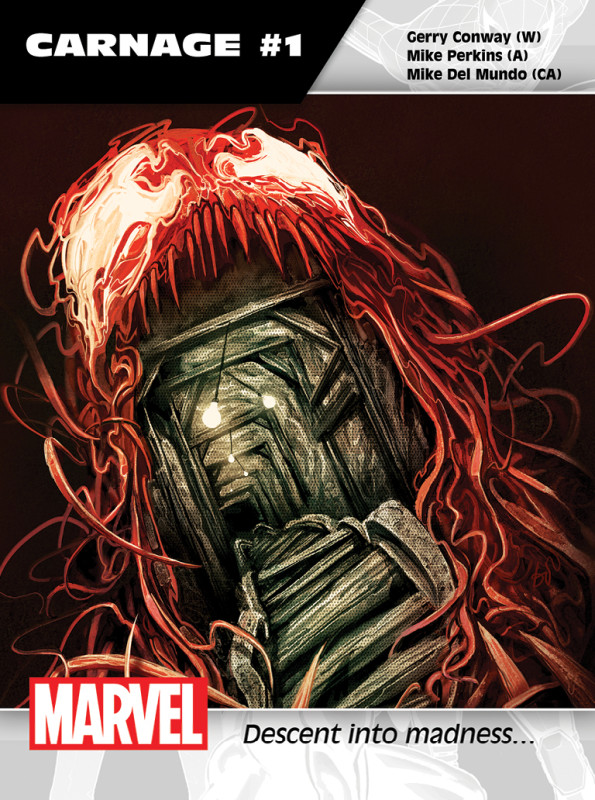 As a character, Carnage has never held much interest for me. But it is interesting that Gerry Conway, who started his career at Marvel on a classic Amazing Spider-Man run, returns to Marvel with this.

Mike Perkins is also an interesting artist choice, being a very quietly realistic cartoonist on a character like this that is so… out there. 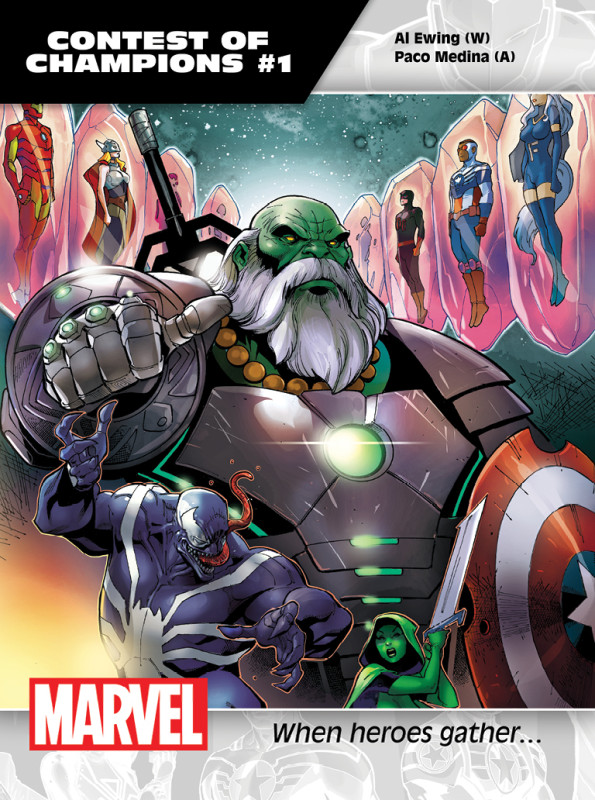 Marvel announced this earlier. It could be fun, but it’s hard to imagine it as anything other than what the original Contest of Champions was — an excuse to read fight scenes between characters that should not ordinarily have fight scenes.

All-New All-Different Marvel D to M can be found here.

N to S can be found here.

T to W can be found here.