Let’s get to it — this is what everybody wanted to know. At this evening’s Marvel Studios panel in Hall H, Kevin Feige has finally confirmed what will happen in 2020 and beyond. Much of what he revealed jibes with what internet rumors had been saying for months — though he still had many surprises.

First, on November 6, 2020, director Chloe Zhao’s take on The Eternals will hit theaters. Veering a little from Jack Kirby’s original creation, the MCU version will have them as immortal aliens sent here by the Celestials to protect Earth from the Deviants.

As had been rumored, Richard Madden will be playing Ikaris, the de facto lead of Jack Kirby’s original run in the comics. Kumail Nanjiani will play Kingo, and I admit, I don’t know who that is. As Makkari, the analog for Roman god Mercury, deaf actor Lauren Ridloff.

Salma Hayek will play Ajak, identified as the leader of the Eternals. Brian Tyree Henry will play Phastos, and Lia McHugh will play Sprite. My dim memory of that character is that Sprite continually respawns — and if Zhao lifts elements from Neil Gaiman’s update from a few years back, all the Eternals will do the same; these appearances may not be what they were thousands of year prior, or maybe they will be.

Gilgamesh, sometimes called the Forgotten One, will be played by Don Lee. And perhaps the biggest star attached, Angelina Jolie, will not be playing Sersi as the internet had had it for months. Feige identified her as Thena. That switch makes sense, as Game of Thrones just ended with a major character named Cersei. Let’s not have brand confusion when trying to launch a new franchise.

On February 21, 2021, we get Shang-Chi and the Legend of the Ten Rings. Destin Daniel Cretton will direct Simu Liu in the title role, and Liu was just cast Tuesday. Tony Leung will portray the real Mandarin, unhappy about the fake one who terrorized America in Iron Man 3. Awkwafina came on stage as a cast member, but I haven’t found a character name.

Scott Derrickson and Benedict Cumberbatch will reteam on Doctor Strange 2 which is actually called… and this is great .. . Doctor Strange in the Multiverse of Madness. Derrickson, who cut his teeth on horror films, promises that he’s going to take Marvel straight into horror with this film. Elizabeth Olsen will join the cast as the Scarlet Witch, somewhere to the left of her duties on the Disney+ series WandaVision.

As news broke earlier in the week, Taika Waititi will return to direct the fourth Thor movie — and Waititi, Chris Hemsworth, and Tessa Thompson all took the stage for the official announcement. Thor: Love and Thunder. which will hit theaters November 5, 2021. 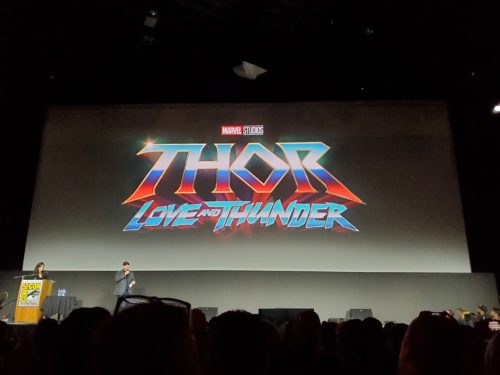 Waititi mentioned that he loves the female Thor run, and that this will come to the Marvel Cinematic Universe, just before Natalie Portman took the stage. So are we getting Jane Foster as Thor? Portman says it feels pretty good to hold the hammer.

Of course, there are Marvel slots announced for before Eternals hits in November, and so Feige confirmed that Black Widow will be released on May 1, 2020. Already in production for 30 days, and hazy on whether or not it’s a prequel or lifting from a recent Black Widow resurrection in comics, the Cate Shortland-directed film will star Scarlett Johansson, David Harbour, Florence Pugh, O-T Fagbenle, and Rachel Weisz. Taskmaster has been confirmed as the villain so… that must be Harbour.

And… Blade will return. Mahershala Ali, once Luke Cage’s Cottonmouth, will be the new Daywalker in Blade. No clear word on whether or not Wesley Snipes will have any attachment to this film, though for years he has said he and Marvel were talking about it.

What’s missing that we all assumed was coming: Black Panther 2, though a few weeks ago Feige had mentioned that writer/director Ryan Coogler had not begun working on the script. It’s in the pipeline somewhere, and already rumors are cropping up that it could be a way to bring in either Namor or the Fantastic Four into the MCU. Guardians of the Galaxy vol. 3 has been delayed so that the recently, rightfully, rehired James Gunn can direct The Suicide Squad for Warner Bros. Other assumed sequels that aren’t there — a continuation of Ant-Man and the Wasp, and Captain Marvel 2. Nor is a third Spider-Man film being talked about — but that’s Sony’s ball to toss around, and they didn’t come to play in Hall H.

However, Captain Marvel (Brie Larson) would likely be planned to pick up what’s going on with Nick Fury and the Skrulls, and most of these announced films look like they’re closing off other threads or starting new ones. Who needs the Kree/Skrull War when you’re introducing the Deviants? Shang-Chi has to face off against the real Mandarin, and not Trevor, so that plot line has been dangling for about five years. But could the Natasha Romanov who sacrificed herself in Endgame have been a Skrull all along?