If you haven’t heard by now, Sir Patrick Stewart returns to the role of Jean-Luc Picard in an upcoming CBS All Access series, Picard. Oh, you knew that? Did you know that Pulitzer Prize-winning author Michael Chabon will be one of its show runners? And did you know that fans went wild at Comic-Con yesterday when the Star Trek Universe revealed the full trailer for the series? Marvel had to really up their game and counter with a multiverse, or they would have gotten lost in the shuffle.

In addition to the Picard trailer, CBS announced that the next set of Short Treks would include three adventures of the Enterprise, crewed by Anson Mount’s Christopher Pike, Rebecca Romijn’s Number One, and Ethan Peck’s Spock. Romijn’s husband Jerry O’Connell will be beaming into the Star Trek Universe as well, but as a voice actor on the animated comedy series Star Trek: Below Decks.

But this is Comic-Con. No mere convention center can hold a franchise as big as Star Trek. For the second year in a row, up the street in the Gaslamp District sits the Starfleet Museum, a pop-up exhibit of costumes and artifacts from this universe. This year, Starfleet has opened up its archives to focus on Jean-Luc Picard and what they refer to as “The First Duty.” 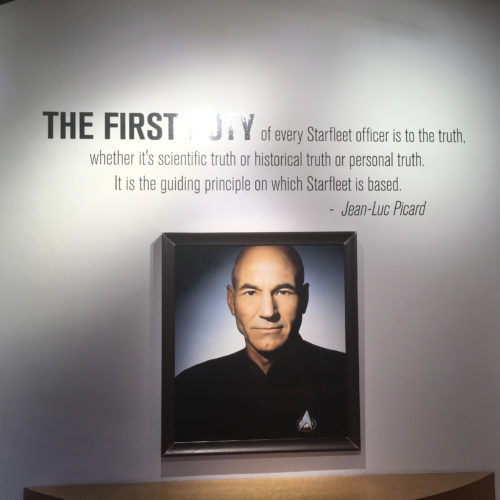 The exhibit walks us through a brief history of Starfleet uniforms, while still staying focused on Picard. Entering the museum, there’s not just one of the more famous portraits of him as seen above, but images from his younger days, including a rarely seen sketch done by a fellow crewmate on Picard’s first tour of duty.

It’s fascinating to see the great man in his youth, a little less careworn, but always an exemplary member of Starfleet. In addition to his many awards on display, Picard’s friendship with his crew on the Enterprise gets a spotlight — almost heartbreaking to see the paintings by Lt. Data, but heartwarming to see the wedding photo of Riker and Troi. There’s also a significant collection of Dixon Hill novels, though it’s not clear if they were from his personal library.

Models of some of the ships on which he served sit gleaming under the lights. Nearby, a collection of personal items reflect how his journeys changed him, and how the new civilizations he encountered stayed in his heart — though in the case of the Borg, that would be more of a haunting than a welcome presence.

Unfortunately, the museum does not sell bottles of the famed Chateau Picard wine, but there’s still a day left at Comic-Con for me to find a place that might. Their excuse to me was that it won’t be bottled for another 200 years. 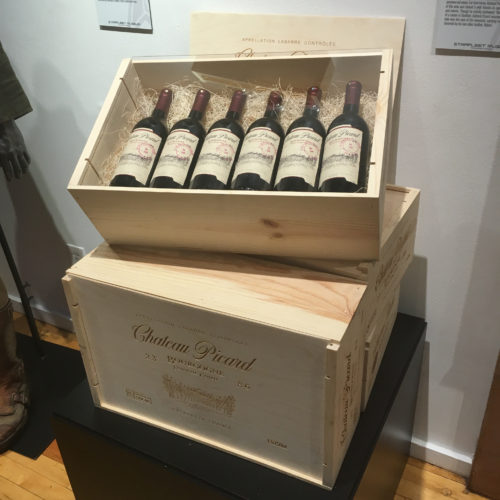