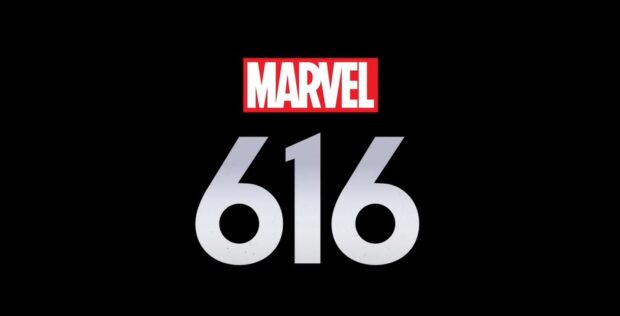 One of the great discoveries of Disney+ is how varied and enthralling their documentary programming can be. Not just those from National Geographic, though The World According to Jeff Goldblum is a consistently ridiculously entertaining show. It’s that Disney, Marvel, Pixar, and Lucasfilm have all taken this opportunity to pull back the curtain in ways that aren’t as self-serving as you’d think.

So when Marvel’s 616 was announced, I had to take a look. The ComicCon@Home panel, “A Look Inside ‘Marvel’s 616′” is July 23 at 1 pm PT. Various celebrity filmmakers including Gillian Jacobs and Paul Scheer take deep dives into concepts around Marvel Comics that will be fun and enlightening. For instance, it’s easy to forget how risky launching Ms. Marvel was at the time — when some people only know now how popular Kamala Khan is, both as a comics character and with an upcoming Disney+ series. But even the little excerpt below puts it in perspective as part of a larger look at trailblazing with strong female characters in an industry that desperately needed them — and was long overdue to create them.

Scheer, a long time comics and sci fi fan, appears in his episode, “Lost and Found,” about some of Marvel’s lesser known (and maybe less popular) heroes and villains. From the clip below, it’s clear that some are played for laughs, but again, weird to have the perspective in 2020 of a time in the last two decades that Black Panther wasn’t the icon he rightfully is today.

I’d argue that Reginald Hudlin’s series was high-profile because it was Reginald Hudlin — the true heavy lifting on Black Panther was done earlier by Christopher Priest in his groundbreaking Marvel Knights Black Panther series — and though Lee and Kirby created the character, it’s Don McGregor and underrated artist Billy Graham’s work on Jungle Action that defined him. Where’s an episode devoted JUST to Billy Graham — one of the very few black artists working in comics in the 70’s?

I digress. Maybe there is such an episode. Or Scheer’s episode will dive deeper. Either way, I’ll be watching the docuseries, and hope to make the panel tomorrow. Once again, the information from ComicCon@Home and Disney is:

Join Gillian, Paul and executive producers Sarah Amos and Jason Sterman with moderator Angélique Roché (host of Marvel’s Voices and The Women of Marvel Podcasts), tomorrow, Thursday, July 23, 1:00 p.m. PT for the virtual Comic-Con@Home panel; “A Look Inside ‘Marvel’s 616’”, where they will discuss the making of this new Disney+ original docuseries.

“Marvel’s 616” explores how Marvel’s rich legacy of stories, characters and creators exist within the world outside your window. Each documentary, helmed by a unique filmmaker, explores the intersections of storytelling, pop culture, and fandom within the Marvel Universe. Films in this anthology series will cover topics including Marvel’s world-spanning artists, the trailblazing women of Marvel Comics, discovering the “forgotten” characters of Marvel, and much more.

Fanboy Planet is an affiliate of Amazon. Any purchases made through Amazon links here may generate revenue for the site.