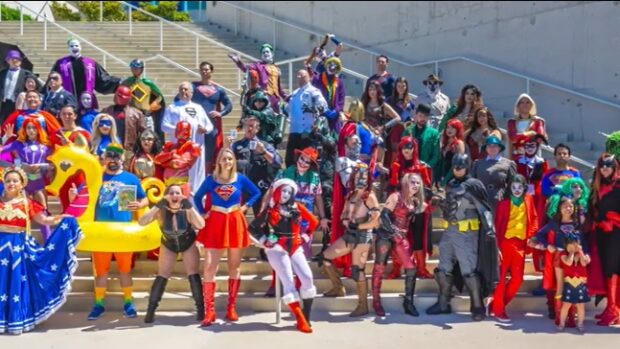 It’s not just an event. It’s a culture. Even though Comic-Con International pivoted well to being online this year — as everything has to do — it’s just not the same. That’s for good and bad; the lines are nobody’s favorite thing, but the crowds in Hall H or Ballroom 20 can’t be beat for a cathartic rush of emotion. A virtual activation for your favorite FX or Amazon Prime show is fine, but there’s still something extra cool about being in an actual escape room for The Boys or Titans. And I admit it — I’ve run down the list of vendors on the virtual convention floor, and it’s just not the same as wandering and discovering something new I had no idea I would want, or run across some unsung creator with a cool book I’d never heard about before. And WarnerMedia may be on to something with the DC Fandome, but it can’t beat actually hanging out with fellow fans.

The San Diego Convention Center misses us, too, and posted this video today to honor that right now, in normal times, we’d be checking into our hotels, or getting off our flights, and breathing in the atmosphere of Comic-Con. Yes, there would be the scent of sweaty fans, but it’s mixed with sea air and aromas from the various restaurants in the Gaslamp District. Comic-Con, I miss you. I’ll be back when you are.