The Fox version of the X-Men have gone through the Dark Phoenix Saga once before. Jean Grey (Famke Janssen) sacrificed herself at the end of X-2, then returned in a far more out of control way in X-Men: The Last Stand. It wasn’t so much that it was underwhelming, though it was, and it wasn’t so much that Brett Ratner helmed it, though that didn’t help, either. It’s that it was a time when Fox didn’t support the idea that hey, these characters should be pushing the boundaries of imagination.

After X-Men: Days of Future Past smudged the continuity and definitely wiped out at least Ratner’s film, the stage was set to do the Dark Phoenix Saga right. This time it’s under the direction of Simon Kinberg, the writer/producer who now oversees the franchise. Last night, I posted a prediction that Disney may let this be the last X-Men movie for a while, due at the end of 2018. With the pictures Entertainment Weekly just posted from the film, if it’s the last of Kinberg’s vision, it looks like a good note to end on.

This time around, the Phoenix Force (if they call it that) will be unleashed by Jean Grey saving her team from an accident in space, essentially as it happened in the comics. Because it’s a film and we don’t have time for a trilogy, the war between light and dark within will happen more quickly and overtly — and no, it doesn’t look like the Hellfire Club will be involved, because they were used in X-Men: First Class anyway.

As had been rumored, Jessica Chastain plays an alien, but the article from Entertainment Weekly does not identify her as Lilandra, nor does it reference the Shi’ar Empire. Instead, Chastain seems to be playing an alien shapeshifter on a quest to eliminated the Phoenix. Plus there will likely be dueling identity switches between her and Jennifer Lawrence returning as Mystique. It won’t be the Dark Phoenix story comics fans remember, but it will reach further than the previous film attempt did.

There are many more pictures at the magazine’s site — check them out! 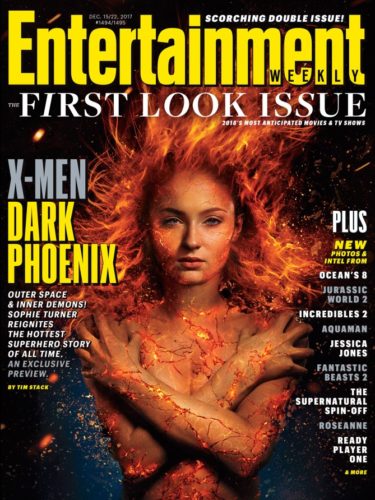