Originally posted 11/22/13 in anticipation of the 50th Anniversary, Drew Simchik wrote a series of articles revisiting his favorite Doctor Who episodes. You can catch them all on BritBox right now to prepare for Peter Capaldi’s return on April 15.  This is #3 of his favorite episodes — read #5 here, and #4 here.

It’s such an obvious idea it’s amazing Doctor Who hadn’t done it before: sailing ships in space, crewed by hypnotized humans, captained by aliens. But what makes it really sing is that the aliens are Eternals, immortal beings who exist outside of time, spiritually empty and unwilling to admit that they need the drives and passions and imagination of mortal minds to ignite their own pilot lights. Either idea is enough to fuel a story on its own; combined, they’re brilliant.

It’s also amazing that Doctor Who has had so few female writers in its history. This is the only story Barbara Clegg ever wrote for the show, and it’s a shame, because her approach feels so fresh and so complete. Every character seems independently alive and motivated, their reactions real and reasonable. Even the Eternals, who despite their formidable powers have adopted ships from Earth history and the practical rules restricting those ships’ abilities, seem to have thrown themselves into roles matching their choices: the officers on board the Edwardian ship are stiff and stoic, the pirate captain is larger-than-life and irrepressible. 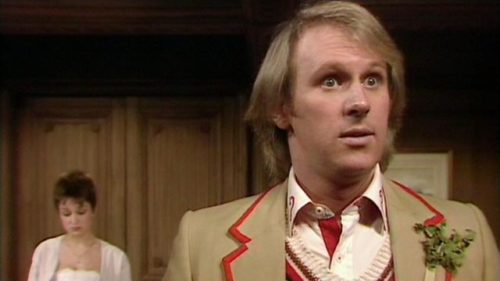 Tegan’s usual stroppiness works when it’s motivated, and here it’s easy to see why so many of the Eternals find her brief candle to glow so brightly. Then there’s Turlough, who as usual is more highly strung than just about everyone else in the picture, but since this is the climax to his story as the Black Guardian’s hired assassin, it’s forgivable.

Truth is, the Black Guardian nonsense is about the only thing that grates about “Enlightenment,” since the story ends with two distinguished actors wearing birds on their heads exchanging bollocks about light and darkness. But it’s brief, and could conceivably have ended the story perfectly well even if it hadn’t formed part of a larger arc.

It’s difficult for some reason to convey why “Enlightenment” is such a rewarding story in the Doctor Who canon. It’s modest in its brilliance, I think is why; I’ve loved it since I was a kid, but until recently hadn’t realized that so many other fans regarded it as highly as I do.

There are some great stories in my top 5, but if I had to pick one that I felt the new series would do well to choose as exemplar of the virtues it ought to be cultivating, this would be the one.