I was going to put a spoiler warning at the top of this, even though I usually don’t, because it seemed like an episode where much of the appeal would be undermined by knowing all the surprises from the outset. As it turns out, the opposite is true: it’s better the second time. Nevertheless, maybe don’t read this until you’ve seen the episode.

I’ll stall a little bit by noting some of the things that aren’t surprises. For instance, the sonic sunglasses finally have a purpose. The Doctor can use them as sonar, and for augmented reality features like identifying vital signs and characteristics of people around him. This explains how the Doctor can walk around without bumping into things, but he still needs Nardole to cover for him by describing things he ought to be able to see, with the side effect of making Nardole’s habit of stating the obvious into a tactical asset.

What else? Well, we see more of Bill’s love life, which I’ve noticed seems to bother some people with how “in your face” it is, and I have to wonder if they had the same complaints about how “in your face” Clara and Danny’s love life was, or Amy’s and Rory’s. I think it’s exactly as in your face as it ought to be, and while the bit where Bill’s foster mum still doesn’t realize Bill’s gay probably strikes some people as being played for laughs, in fact as you know if you’ve ever been in that situation, it’s mainly just a depressing and difficult fact of life. I have no complaints about how Moffat’s handling this aspect of Bill, even if the shtick with the Pope in her kitchen is a bit of a reach. 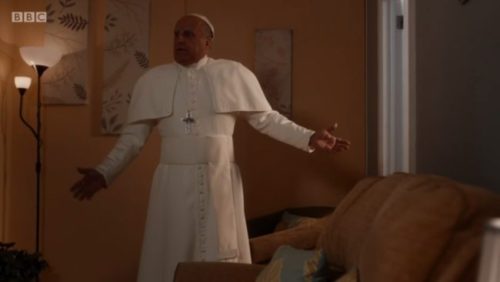 Ah yes: the Pope. This is Doctor Who doing Dan Brown: ancient secrets in the Vatican, a heresy tied to mysterious deaths, a particle physics research center wired to explode, a sinister order of horribly scarred monks. On the first viewing it looks like gratuitous absurdity, wacky genre crossbreeding for the sake of appearing fresh, taken a step further with a “consulting the Doctor” scene straight out of Sherlock. The “Veritas” pitch, that of a secret untranslated truth that drove all who read it to commit suicide, seems impossible to pay off, and Monty Python fans may find themselves thinking of the sketch about the “funniest joke in the world,” a joke so hilarious that anyone who heard it died laughing (eventually translated one word at a time into German to be used as a weapon in World War Two). And yet the truth, when revealed, really does seem like it would have the advertised effect. And here we can avoid spoilers no longer: the revelation that proves beyond doubt that one is merely a tool aiding an alien invasion would indeed lead most brave souls to end their own complicity in the most final way possible. The wild, improbable, ridiculous plot actually kind of works.

It mostly works on paper, though, because in practice it leads to quite a lot of “ooh, that looks like a portal, doesn’t it?” and “these strange alien devices are simulating Earth” and so on — basically a metric ton of exposition, punctuated by perfunctory interjections like “it can’t be! this table feels real” and “you can do nothing to stop us!” and that sort of thing to break up the speeches. In a lesser season this wouldn’t show as much, but since the rest of Series 10 is so strong with dialogue and performance, this story’s seams show where it gets too excited about its cool Da Vinci Code / Angels and DemonsAngels and Demons setup to be dramatically convincing. I thought the aliens themselves looked reasonably creepy, but my girlfriend happened to be watching with me and found them ludicrous, so that might be another seam showing. Perhaps the pyramid from next week will be related to why the aliens look mummified. 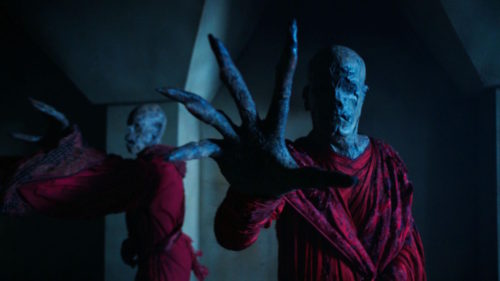 And of course now we know who’s in the vault, and as everyone has been assuming, it’s Missy, or at least it’s supposed to be Missy. The fakeout at the beginning works rather well, where we think she’s going to be executing the Doctor, and he ends up executing her. She gets a few witticisms in there, but she’s not her usual sparkling self, clearly at the end of her rope, or wanting us to think she is. We also learn that Nardole was sent by River Song to follow the Doctor, and he has her diary, the significance of which I’m leaving as an exercise to a reader with a better memory for her convoluted timeline than I have. 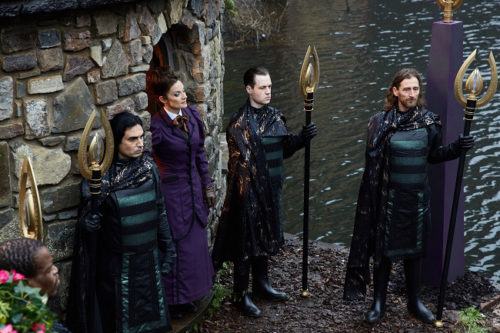 Is all this runaround any good? I still can’t quite decide. The question almost seems irrelevant, given that the story’s primary role is to answer some important questions (what was the Doctor’s vow, what’s with the vault) and to set up the antagonists in the next episode; it’s glue, binding the season together and moving the arc along. In this it’s a lot like “A Good Man Goes to War,” which is similarly difficult to talk about as a standalone story. The central concept, artificial people trapped in a villain’s computer simulation, is of course reminiscent of The Matrix, right down to the allusions to gnosticism, but it’s also been done in Doctor Who, at least as far back as 1982’s “Castrovalva,” but also as recently as “Dark Water”/”Death in Heaven.” The alternate universe serving as a warning for what could happen in ours harks back to 1970’s “Inferno.” These are impressive relatives, next to which this story seems like a bit of a hyperactive nephew. So far it seems like the weakest story of the season, but we won’t know for sure until we see the payoff.

Incidentally, one of the first clues that we’re not dealing with “our” universe is the reference to Pope Benedict IX, about whom many surprising things were alleged (according to Wikipedia, repeating rumors that may or may not have been politically motivated slanders), but as far as my cursory research has so far determined, one of those things was not “he was a woman who had a way with castanets.” This might also be a clue that the aliens’ simulations are not a perfect match for actual Earth events, which might result in them being the first Doctor Who monsters defeated by subpar grades in history. Unless you count the Terileptils.