I’ve never been that great at figuring stories out ahead of time. I’m pretty sure I had no idea whose father Darth Vader would turn out to be before that moment in The Empire Strikes Back. I had a vague suspicion something was up in The Crying Game and The Sixth Sense, but I didn’t guess what before the big reveal. Perhaps they were more innocent times, before we all learned to look for a twist or an ironic revelation at the climax of every story, or perhaps I’m just not the look-ahead-and-guess type. I bring this up because I had “Oxygen” figured out at 12 minutes and 23 seconds in, and if it was that quick for me, the rest of you clever kids must have guessed the whole plot sometime during the cold open.

Does it matter? Maybe not. Maybe it’s a testament to how fairly Jamie Mathieson plays that the clues we need to the mystery of the space zombies are so obvious, out there in plain sight. Once we know that oxygen costs money, once we see an empty spacesuit doing manual labor all by itself, it’s not hard to figure out that somewhere along the line a think-outside-the-box MBA back at corporate HQ must have realized it might be cheaper to run the station using the suits.

After the episode is over you might find yourself asking the usual hey-what-about questions, like why the 36 zombies stalking the station by the time the Doctor arrives don’t appear to be getting any work done (maybe 30 of them are and only 6 are on homicide duty?), or what exactly is going to happen when that relief crew arrives (there’s no motivation to work more efficiently like finding out your predecessors have been not just fired but literally terminated). But while it’s on, the episode generally hangs together and keeps the tension up.

This is accomplished in part by keeping the body count high. No reset buttons this week: unlike magical wood lice, spacesuits kill you dead. Except in the one case when they don’t, obviously, and we never quite get a satisfying explanation of why not. Whatever the suit does to Bill with its not-enough-power-to-kill, it’s enough to make her essentially catatonic for a good long time, which along with passing out from exposure to vacuum seems like it should have left her a good deal worse for wear. Still, Pearl Mackie sells Bill’s terror pretty convincingly, and even though we know she’s not dead it’s still wrenching to hear her cry out for her mum. 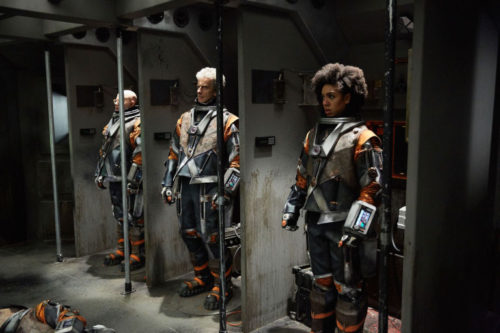 And then there are the consequences for the Doctor, rendered blind by his helmetless spacewalk. It’s an unusual choice for the show to make, one whose rationale will presumably become clear in “Extremis,” Moffat’s next episode. I’d speculate that there’s some thematic resonance, something about the Doctor being blinded by his compassion for his companions, but it’s probably just a way of making a plot point work next week.

Capaldi is again in fine form, making moves we haven’t seen him make yet. Some of the speeches Mathieson gives him (“you’ll wonder who I was for the rest of your life” or whatever it was) are well over-the-top, and Capaldi underplays them as best he can, while others, particularly the climax where he persuades two humans plus Nardole (see below) to die in what amounts to a suicide bombing, work perfectly. Bill is a bit more generic than usual, mostly circling the standard companion emotions of apprehension, explain-it-to-me-Doctor, and panic. (The less said about the “blue alien” banter the better.) We can hardly blame her under the circumstances, though: it’s the first adventure of the season where things are grim from start to finish, the latest industrial base-under-siege in a show that had made them into a dreary obsessive art by 1969. If she hadn’t realized before that traveling with the Doctor isn’t all fun and games, she has now. Perhaps she’ll be the first modern companion who decides to leave the TARDIS because she discovers the fabulous space vacations are the exception, not the rule. 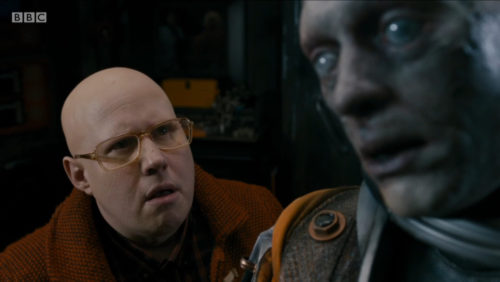 Matt Lucas is great to watch as well, still saddled with playing Jiminy Cricket to the Doctor but given a bit of decent comic relief to do and a minimum of “oh dear oh dear” mugging. Even after a second viewing I couldn’t quite piece together what we’ve learned about him, but it sounds as if the mouth speaking Nardole’s words is actually Nardole’s dead body, and the intelligence choosing them is something else, perhaps an artificial intelligence of some kind. But he evidently had a different face at one point in his life. Is it someone we already know? (River, downloaded from the Library? No chance she’d act like this.) No obvious candidates spring to mind, but why be this coy about it unless there’s a surprising reveal?

This is the third political episode this season examining the relationship between management and workers, and the least subtle yet, which is saying a lot after “Thin Ice.” The Doctor claims his endgame gambit as a victory against capitalism, though it seems applicable to pretty much any of the societies in human history where the powerful few have been able to exploit the ordinary many — feudalism, communism, slavery, united by a regard for the worker’s life as expendable. Unless this story takes place much farther in the future than it seems to, the Doctor’s recollection of history is also contradicted by many, many classic series episodes (and probably at least a few new series episodes) which suggest that the long-lasting Earth Empire remains a capitalist economy (with example after example of untrustworthy Companies) for millennia to come. But if you can’t appreciate and relate at least a little bit to a story where the people you work for seem to view your most basic human needs as an unwelcome expense…you just might be one of the suits.