The TARDIS lands in what looks like England’s so-called “imperial century,” and are surprised to find the waters beneath them not as safe and ordinary as they expect. An ambitious man with a great deal of power is engaged in an enterprise whose goal is a massive, unearthly profit, and he doesn’t care even a little bit how many human lives he must sacrifice to achieve it. The Doctor and his companion must recruit the assistance of an equally enterprising female and her ragtag band of rogues in order to get to the prize first and set it free.

I swear I’ll stop it with this gag sooner or later, but this could be 1983’s “Enlightenment,” or it could be 2017’s “Thin Ice.” The two stories also share the distinctions of being among the very few Doctor Who stories written by women (Barbara Clegg in the former case, Sarah Dollard in the latter) and being top-notch, practically flawless works. “Enlightenment” is a top five story for me as far as the classic series is concerned; “Thin Ice” may well rank up there as far as the new one goes. 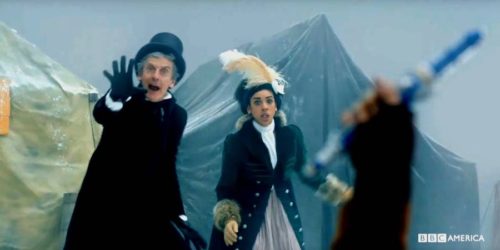 Further, both stories are concerned with class. “Enlightenment” gives us an immortal “ruling class” of nearly omnipotent beings, the Eternals, whose spacefaring vessels are manned by mortal Earthlings who are often killed in the course of trying to win an interplanetary race for their masters. “Thin Ice” gives us an ordinary Earth aristocrat who feeds London’s working class and underclass to a giant chained creature that looks like a fish and sounds like a whale so that it can excrete them as a highly efficient fuel source. Both grant the final moral choice to the Doctor’s companion rather than to the Doctor himself. And both are concerned with the ethical dimensions of the choices made in the stories, rather than shrugging them off thoughtlessly as the consequence of adventure.

“Thin Ice” handles this last bit more convincingly and articulately and also gracefully than we’ve seen in a long time. This is the first time Bill has seen a person die in front of her, and, deeply affected, she confronts the Doctor about his apparent willingness to shrug it off. He does care, he tells her, but not enough to count the number of times it’s happened (surely some fan out there has made such a count; I certainly haven’t), and in the end he simply…moves on. She presses him: has he ever killed anyone? He hesitates, but eventually admits he has (season 22 of the classic series alone contains at least three unambiguous and often remarked-upon examples, and the most recent one that comes to mind is the Gallifreyan General he shoots in “Hell Bent”). He claims that after living for 2000 years he cannot afford the luxury of outrage. And though this claim is thrown into question later on in the episode when he seizes the opportunity to punch a racist in the face, I’d argue that it’s still accurate. Outrage is what one performs when one is unable, at that moment or perhaps ever, to act. If one can act, as the Doctor does at that moment and every other, there is no reason to dwell in outrage.

Though some will no doubt find the politics of “Thin Ice” heavy-handed, I found them beyond reproach. Conversations about the whitewashing of history, the value of life, the blindness of privilege, and the measure of civilization are handled with impeccable grace, even if Bill is perhaps slightly too impressed with the Doctor’s fairly matter-of-fact speech about the latter three issues. On two occasions the Doctor defers to female authority in situations where this is entirely justified (resolving a dilemma reminiscent of the one in “Kill the Moon” in a much saner fashion). The eventual passing of privilege to London’s less fortunate is exactly what we’d want to see happen. It’s the Doctor and his companion righting wrongs in a worthwhile, thorough, and satisfying way. One can imagine the churl who’d object to any of this, but one cannot agree with him, nor quite respect him.

The characterization of Lord Sutcliffe himself might be the most cartoonish element of the story, being entirely self-aware of his complete lack of compassion, but he’s no more cartoonish than your typical Dalek. The child actors are competent and never outstay their welcome. And both Capaldi and Mackie are in top form, already leaps and bounds more compelling to watch than in “The Pilot.” Blink and you’ll miss the scene where the Doctor tries to congratulate himself on his ability to entertain the street urchins with a storybook, and Bill objects (quite rightly) to his attempts at 21st century slang, but it works so much better than similar lines in the series opener. 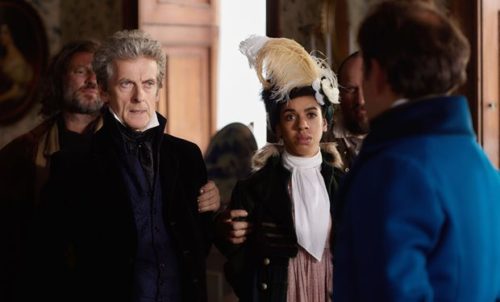 In some ways, the actor playing every new companion has it harder than the previous one did, having to sell the same reactions to the inevitable realities of traveling with the Doctor in a fresh new way, but Mackie is more than up to the challenge. When we finally see her toward the end, realizing that she’s run out of time and she won’t be able to save everyone still on the frozen Thames before the explosives go off and ice cracks, finally grasping the difficult choices the Doctor makes in every adventure and just urging the kids to run and save themselves, it’s the most natural transition in the world. For this episode, at least, this is a tremendous TARDIS team, and I can finally say I’m sad this will be the only season with the two of them.

In the postscript to one of the very best stories of the past ten years, we get more of Nardole back in that subdued mode that worked so well in “Smile,” providing both an explanation for his post-“Husbands of River Song” survival (the Doctor has “reassembled” him — what more do we need to know?) and a hefty bit of foreshadowing about what’s in the vault (more like “who,” and whoever it is they’re dangerous…so probably not the Doctor’s granddaughter Susan, then). Terrific stuff, this. More, please.