And just like that we’re back in a classic mode, in this case the Earth invasion stories that introduced UNIT in 1970 and continued through the mid-70s. Some would say this mode peaked in 1975 with “Terror of the Zygons,” the only story of the classic series to feature them (and their cybernetic Loch Ness Monster).

Even in that story they were explicitly refugees, unable to return to a home planet destroyed in a stellar explosion. This, along with their shapeshifting ability, makes them an ideal choice for an uncomfortably on-the-nose story about current events, including radical terrorist insurgency and the Syrian refugee crisis.

It’s gripping stuff, to be sure. It makes the previous six episodes, enjoyable as they were, seem like a lot of playing around. If you’re alive in the world today you can’t fail to be interested in these topics, regardless of your position on them, and they’re treated in a way that might seem unusually gritty to Doctor Who fans who’ve never seen the classic series. The body count is high, even if the corpses are tastefully if somewhat comically represented by electrified hairballs. Children are kidnapped and apparently murdered. There is an extended scene in which a soldier points a gun at a woman who may or may not be his mother and deliberates about whether to shoot her down. You can’t really accuse this episode of playing around.

You can accuse it of jumping around a bit, and it’s a little confusing just what exactly the plan is half the time. It seems that the peace treaty between humans and Zygons negotiated in “Day of the Doctor” allowed Zygons to remain on Earth and live side by side with humans as long as they never ever revealed themselves as Zygons. Of course, they are apparently exact copies of living humans, and while the two Osgoods could easily have lived as twin sisters it’s not clear how the other 19,999,999 copies are supposed to coexist without anyone noticing. It’s an ambitious idea, to put it mildly, but perhaps very slightly easier to swallow than the idea that the moon has always been an egg. 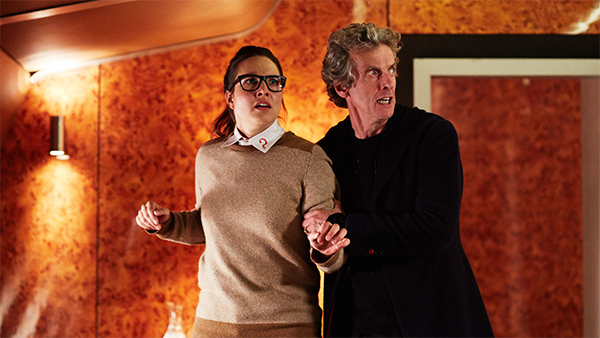 When one Zygon child accidentally reveals its true form, all hell breaks loose and suddenly the Zygons (or at least a radical splinter group of them) decide the war is back on and it’s back to imitating humans for purposes of infiltration and murder, not assimilation. Our heroes split up, which as always is a terrible idea, and what ensues is scene after scene of tricky tricky Zygons doing nefarious things.

All sorts of interesting questions are sidestepped. Before the treaty fell apart, what was life like for a Zygon — a hulking, moist, hissing amphibious-looking creature with limited social grace by human standards — trying to fit into human society? Were there enclaves or settlements where they could stretch out their suckers and relax where humans couldn’t see them? Did they pay taxes, shop, go to hospitals? A couple scenes of these would not only have been entertaining and intriguing but would more importantly have set the stage for the idea that this treaty was a viable strategy for peace and that the Zygons actually deserve some measure of compassion.

Because “The Zygon Invasion” does a lot of work to erode any sympathy we might feel for the creatures. Scene after scene shows them as conniving, ruthless, bloodthirsty murderers, willing to use literally duplicitous tactics to play on human scruples and gain the upper hand. In one scene a drone pilot can’t bring herself to bomb a Zygon family that appears too much like her own. In another Clara seems bizarrely willing to overlook what appears to be a child afraid of his own parents (though this is later explained). And then there’s that scene with the soldier and his mom. None of this is likely to endear Peter Harness to the crowd who felt his previous “Kill the Moon” read as a pro-life allegory, and are likely to read this one as an anti-Muslim anti-refugee polemic, despite the “splinter group” and anti-assimilation dodges. It seems inevitable that we’re being set up to change our minds about them in the conclusion (whose very title, “The Zygon Inversion,” all but promises this), but Harness has gone to great lengths to make this seem impossible.

He’s also gone to great lengths to ensure this episode passes the Bechdel Test. Like his previous “Kill the Moon,” “The Zygon Invasion” keeps most of its male characters to the sidelines in favor of its female leads. The military leader working with the Doctor, the drone pilot, the sheriff of Truth and Consequences, the two ousted Zygon leaders, all female, and all for the most part well cast and acted. Clara gets a bit more to do this time around, after being absent for most of “The Woman Who Lived.” And of course Osgood’s back, and terrific; we may never know if she’s the human or the Zygon Osgood, since it’s become a moral issue for her not to disclose her origins.

Sadly, it’s our UNIT crew who still fail to inspire confidence. Even though they’ve supposedly shifted from a military focus to a scientific one, and even though she’s considerably stronger here than she has been in most of her previous appearances, Kate Stewart still seems strangely inadequate to the task at hand, and Jaye Griffith’s character Jac seems completely at sea in a crisis. To be fair, classic series UNIT’s Sergeant Benton and Captain Yates never came off as the most hardened of military men either, but still. 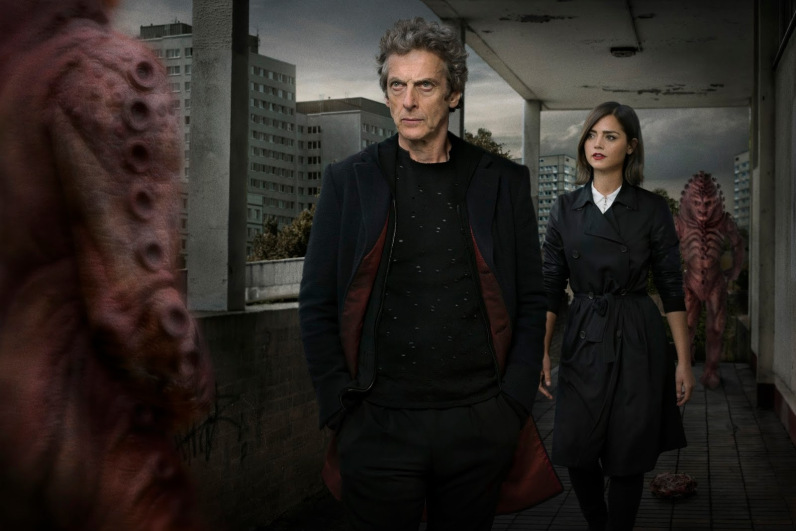 Then there’s the Doctor, curiously passive just as in “Kill the Moon.” He does get in a bit of grandstanding (mainly “poncing about in a big plane”), perhaps a bit too much. I’ve been giving the guitar playing and the sonic Wayfarers a lot of rope, but with this episode they may have hung themselves. The Doctor doesn’t need to strum pensively every time he finds himself alone in the TARDIS. These motifs are starting to look less like Capaldi’s grace notes for his Doctor’s character and more like the desperate attempt at cool their detractors always said they were. It doesn’t help that he refers to himself as “Doctor Disco” and “Doctor Funkenstein” over the course of the episode. Relax, dude.