Let’s cut to the chase: this is the best episode of Doctor Who since at least “Dark Water,” whose plot it resembles in numerous ways best left as an exercise for the reader. I’m not complaining in the least. To grapple with all the terrific moments here, let’s turn to a structure I’ve used in the past to tame more hyperactive event stories, and which I’ll use this time to allow us to linger and stretch time at the very edge of the Capaldi era and indeed the Moffat era. Everything we’ll miss is here, and it’s glorious.

0:00 – 5:00
Well, now we know why the word was Capaldi had already filmed the regeneration. Stating the obvious: his hair’s much longer (perhaps more Pertwee-esque than ever before) or at least less styled, and there’s no context whatsoever apart from the snow, so this could be happening pretty much anytime and anywhere. The only immediately apparent reason for it to happen right now is to tease the possibility (for around 3 minutes) that he’s regenerated into Michelle Gomez. It looks like this is going to be another reluctant regeneration, too. Eccleston and Smith were sanguine, but Tennant and Capaldi are choleric in death. 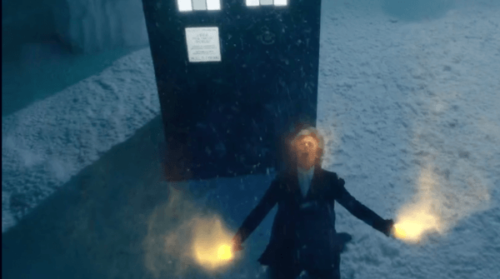 The ship and the black hole are pretty spectacular, but we’re so used to this sort of thing in movies we might not notice how great it is in a show with this budget.

“Time Lords are friends with each other, dear. Everything else is cradle-snatching.” Well, she would want to be his only friend. But it helps reinforce why he’s going to such lengths to reform her. Capaldi is perfect with his feet up eating crisps while she goes through a test only somewhat reminiscent of (again) the most recent episode of Sherlock.

5: 01 – 10: 00
This banter about the Doctor’s name is also perfect. They tease it back and forth until the Doctor finally confirms that it’s absolutely the name he goes by because he likes it. So not his real name, but still pretty much his real name, with the “Who.” When I miss Moffat, it’s going to be for cheeky moves like this. Just like that, it’s canon, everybody!

It’s not entirely clear why the blue janitor is so afraid of the proto-Cybermen coming up in the lifts, since all they do is take Bill away. Perhaps he’s just trying not to add to their numbers.

Oh, sorry, so yeah, that’s the first spoiler. But obviously we’ve known they were coming since the start of the season, and if you missed them then, you saw them in the Next Time trailer. So yes: Cybermen.

10 : 01 – 15 : 00
It’s simple, but it works: Missy is, as she was originally conceived in 1971, the Doctor’s dark mirror, his evil twin, but his mirror and his twin nonetheless, hence he’s soft on her and wants nothing more than to give her one more chance. So many human nightmares get undeserved leeway for exactly the same reason. Love enables monsters. It’s awful, but it’s our nature. 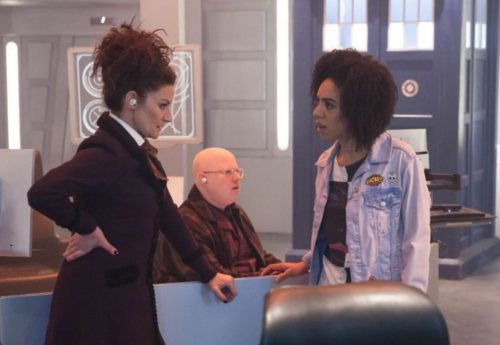 Bill has clearly been given a lot more background on Missy offscreen. Back in “The Lie of the Land” Missy was a woman the Doctor was inexplicably keeping imprisoned, but now she’s someone Bill wouldn’t trust with a cupcake.

More canon-rattling: the Doctor implying he might not have been a man in his Academy days, suggesting that either William Hartnell wasn’t the first Doctor (doubtful for too many reasons to list) or that the Doctor’s memory is getting seriously fuzzy in his advanced age. Bill’s “Time Lords” zinger is the perfect capper.

15 : 0 1 – 20 : 0 0
The pair of clocks is too much information to take in without pausing, but it sets up the time differential between the two ends of the ship. And here we have the first appearance of Mr. Razor, who appears to be cut from the same shambling idiot cloth as that one in Babylon 5.

Hospitals are always scary (see also “The Empty Child”). They’re even scarier when the patients are so wrecked that they can’t say they’re in pain, they can only type it.

2 0 : 0 1 – 2 5 : 0 0
This is why I love two-parters. 45 minutes forces a breakneck pace. 90 minutes gives you enough time to build mood, and suspense, and let Bill discover slowly and with utter dread that the only reason she can no longer hear the patients typing “pain” is that the nurse has turned down the volume.

At this point I still hadn’t recognized the actor playing Mr. Razor.

2 5 : 01 – 3 0 : 00
It’s profoundly sad, what’s happening to Bill. It’s not just that she’s had a hole blown through her chest and had it filled with a Cyberman chest unit. It’s also that she’s spending months, years, mopping the floors of a hospital where the patients eye an open window with naked desire to escape (one way or another), and where her only company is perhaps the most evil person on the entire ship. She doesn’t know about this last bit yet, but otherwise she’s holding up extremely well under the circumstances. She may well be the most resilient companion we’ve ever seen. 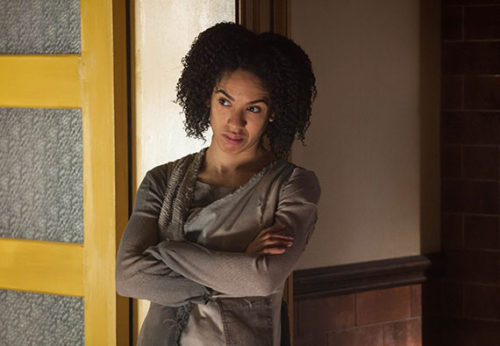 30 : 01 – 35 : 00
The Big Finish audio play “Spare Parts” was, until now, the closest thing we had to a Genesis of the Cybermen. The world it suggested was much like what we see here: a drab underworld of the poor and destitute, shuffling in rags for scraps.

35 :01 – 40 :00
I’m pretty sure it was right around the time Mr. Razor puts on the burgling mask that I realized who he was. It should have been much sooner, though, since the presence of John Simm was of course the other thing we’ve been spoiled about well before now. His goatee is a throwback to Masters of old (Delgado in the Seventies, Ainley in the Eighties), as is his penchant for disguise. It wasn’t uncommon for him to use a name that either meant “Master” (e.g. “Magister”) or was an anagram of “Master” (e.g. “Estram”). And of course, an anagram of “Mister Razor” is, er, “Master Rizor.” “Masterizer”? “Master Ziror”? Well, nobody’s perfect.

Missy knows too. She’s nervous. Only one person could make her this nervous: herself.

40:01 – 45:00
So: Mondas. The tenth planet in our solar system, out beyond Pluto, and for some reason Earth’s exact twin, only inverted: another dark mirror. (If Missy is the Doctor’s dark mirror, Razor, in a sense, for a moment, in her semi-reformed state, is hers.) Mondas and its bizarre cloth-faced Cybermen appeared before once and only once, in 1966’s “The Tenth Planet,” at the end of which story the First Doctor regenerated.

And so we learn that not only did the Master help create the Cybermen (after escaping from the events of “The End of Time,” before regenerating into Missy), but that he also converted Bill into one of them long before the Doctor ever met her, ever decided to take her on as her tutor, ever reluctantly decided to bring her along on the TARDIS, ever promised not to get her killed. 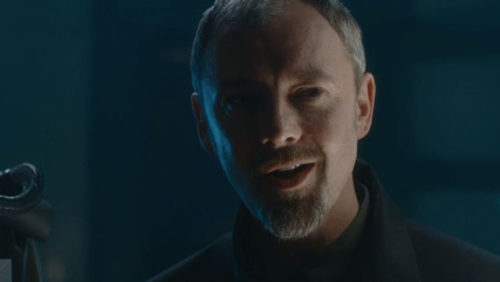 I mean, next week looks like it’s going to be at least as manic as “Death in Heaven,” with a whole bunch of Cybermen blowing up in gratuitous ways, but for the moment, we’re left on a cliffhanger that’s as harrowing as we’ve ever had. There’s a very real chance that Bill will be the only new series companion to date who will die and stay dead.

I’m utterly dismayed. And I can’t wait till Saturday. This is how Doctor Who should be. 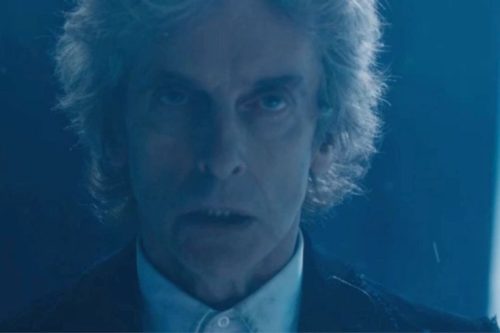