At this point it really does feel as though the Monks have always been here, so I’m looking forward to something new next week, even if it’s the Mark Gatiss episode. Fortunately, I’m one of probably a few people who felt they went out on a relatively high note.

“The Lie of the Land” needs us to believe in an entire world oppressed by thought police, where life is fine as long as one accepts the titular lie that the Monks have been at humanity’s side throughout time, helping us through our evolutionary path, our greatest inventions, and our biggest achievements. It does this through anecdote (fascist thugs kicking down the door) and montage (the Doctor’s voice over a series of Forrest-Gump-like insertions of the Monks into photos from human history). It’s a little brief, but in 2017 we’re not only watching The Man in the High Castle and The Handmaid’s Tale but we’ve seen examples of fascist alternate presents in Doctor Who already (notably “The Last of the Time Lords” and “Turn Left,” probably fresher in most people’s memories than “Inferno”), so maybe this is all that’s required. It’s interesting how “The Lie of the Land” does for the Monks and human history what “The Name of the Doctor” did for Clara and the Doctor’s history, making her seem a little more intrusive in hindsight, but I digress. 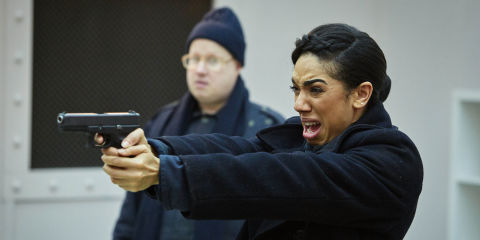 From the setup we move into the first big set piece of the episode: Bill and Nardole tracking down the Doctor. There’s a bit of a cheapness to the fact that the episode’s big hook — the Doctor appearing to side with the Monks — is an overly elaborate charade, but the case he makes is surprisingly, perhaps chillingly plausible. Less plausible is the fake regeneration — Bill has no idea what it is, because if she had, she would have worried less about rescuing him in the previous episode, and there hasn’t been time for the Doctor to explain it in the meantime. It happens purely for the sake of a dramatic trailer tease.

But the rest of it is pretty terrific: Capaldi and Mackie are once again among the best actors this show’s ever seen, and the words are on par with all but the best of this Doctor’s speeches. On first viewing, everything happens quickly enough that it looks as though Bill pulls a gun and shoots the Doctor out of shock and betrayal, but a second viewing confirms that she expresses a practical reason: she realizes that if the Doctor’s on the side of the Monks then humanity really is doomed, and the only obvious moral course of action is to kill him and give the world a fighting chance. She’s also had six months of listening to him broadcast these same views, and though she presumably figures the broadcasts are a ruse, there must be part of her that’s thought about what she might have to do if they aren’t. 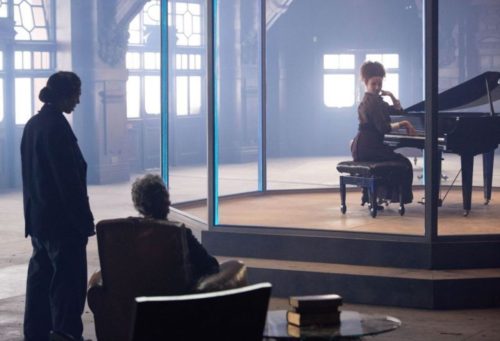 From the companion being obliged to kill the Doctor we move to the Doctor obliged to kill the companion: the second set piece, finally entering the Vault to see Missy imprisoned in a setup inevitably reminiscent of The Silence of the Lambs and the final episode of this last season of Sherlock. If putting Capaldi and Mackie in a room together and letting them play off one another is a brilliant move, adding Michelle Gomez is even better. The conversation is taut and layered, given that Missy is ostensibly in prison to be rehabilitated (having promised to “turn good”) and tensions run high between her and the Doctor…and Bill, who meets another of the Doctor’s kind for the first time and within moments discovers that she’s as blasé about murder as Bill isn’t. It’s a marvelous scene, right down to the way Missy says the word “volcano,” and it ends with the discovery we knew was coming: the easiest way to break the Monks’ hold is to kill Bill.

From here it’s on to the last and least effective set piece: the Doctor and company invading the pyramid in order to disrupt the Monks’ broadcast at its source. Whether you’re impressed by the solution, in which Bill is able to succeed where the Doctor fails because of her adoption of her mother as an imaginary friend, depends on whether you’re the sort of person who’s been impressed by all the other times in new Who when the power of love proves sufficient to dash the plans of even the most omnipotent villains. For me, at this point, it didn’t matter much since the Monks had never been a remotely believable threat to begin with. Had they stopped running simulations by this point, such that they couldn’t have guessed the Doctor and Bill would elude their influence? How is it that a race of beings who can teleport into a fighter jet or stop a missile in mid-air can’t defend the entrance to their pyramid from a handful of humans with machine guns? Why do they even need to post guards at all, if they have the power to heal the blind remotely and instantaneously and can presumably reverse the process anytime they like? What were they even getting out of the deal in the first place — just obedience? As antagonists, the monks never made any sense in any of their appearances, but “Extremis” and “Pyramid” were able to borrow against the promise that this would be the episode in which all would be explained. It’s not entirely this episode’s fault that it couldn’t pull the same trick, and that nothing was explained. 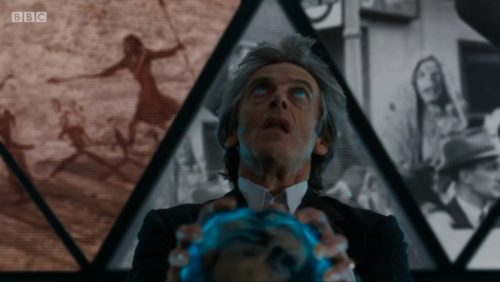 As a metaphor for forces we’re told have always been with us, helping us, demanding nothing but obedience, though, the Monks do stand in quite well for certain strains of religion, particularly the “fundamentalism” the Doctor refers to. The “fascism” part is obvious, and the two often go hand in hand, both demanding a big lie to keep the population in line. I have to wonder about the people who were horrified that Bill is driven to shoot the Doctor, and then is laughed at when it turns out to be a way of confirming her incorruptibility (fair enough, a short serious apology from the Doctor could have helped a lot to defuse that scene). Were they similarly horrified last week when she made the opposite move, saving the life of one man by dooming billions to tyranny? For six months, real people were really executed because she chose the well-being of her friend over the well-being of the entire planet. I’m not inclined to condemn either of Bill’s decisions, but putting the interests of our friends above the well-being of humanity is how fascism begins.