No, Mickey and Minnie have not begun lurching through the streets of Mouseton in search of brains. This peppy musical from the Disney Channel has something more insidious in mind — the complete transformation of zombies from dark and frightening to… pastel. And if you’re under 12, I’ll bet it’s pretty entertaining.

By now, zombies have become so mainstream in our culture that it’s surprising it took Disney this long to make a musical. And as I dug around, it turns out that this is the second time they’ve mined this material. Originally shot as Zombies & Cheerleaders with a more Disney sitcom look, that project was shelved for five years until they remade it with the right choice: it’s a silly idea, so embrace it. So was High School Musical, and a whole generation grew up loving it while their older siblings sneered. What I’m saying is… Z-O-M-B-I-E-S probably isn’t for you, but it is for your kids, and Disney knows it.

Actually, it borrows a bit of camp from Zombie Prom, with an opening sequence that showed a lot of promise. (Slightly darker prequel, anyone?) Fifty years earlier, the bucolic town of Seabrook had a nuclear accident. Half the town turned into zombies, brain-eating and all, but were luckily walled off into an enclave called, naturally, Zombietown. The government developed bracelets that keeps their homicidal tendencies at bay, and so zombies can live their lives in a far livelier neighborhood than any of the regular “human” Seabrook seems to be.

What they eat is … unclear, though there’s a reference to cauliflower because at least it looks like brains. But though they’re clear-headed and raising zombie families, the zombies are clearly second-class citizens. It’s going to be up to narrator Zed (Milo Manheim) to cross the line into acceptance when he becomes the star football player of Seabrook High. Because after fifty years, it’s time to integrate the high school. And it’s really best not to think about it — or why the zombies all have green hair and kind of look like the Joker. 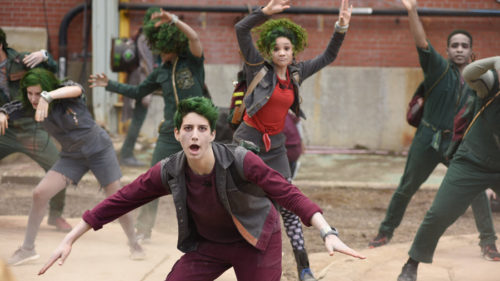 Of course Zed meets cute with Addison (Meg Donnelly from American Housewife), who comes from the legacy more powerful than football: cheerleading. Her family has two dark secrets — Addison’s grandfather had his ear bitten off by a zombie in the initial uprising, and she herself knows what it’s like to be different because she has white hair. (She wears a blonde wig.) My son pointed out that when the wig comes off, she looks suspiciously like Rose McIver on iZombie.

There are conflicts, there are silly campy moments, and there are tremendous dance numbers with poppy songs that echo those of High School Musical, and again, it’s not something to analyze deeply. I admit that I smiled at how thoroughly they embrace having the school mascot be a shrimp. And not a rainbow shrimp.

Though the logic has been smoothed out by the needs of a Disney Channel movie, there actually is some storytelling hanging together, even if it’s predictable for adults. With a little tweaking and a few more songs, this could easily get added to the catalog of Disney stage shows that middle schools and high schools do, and yes, it would be fun.

Z-O-M-B-I-E-S takes a different tack than my beloved Zombie Prom (which still, dangit, should get a feature-length film adaptation), and it’s the first of two zombie movie musicals this year. This one’s clearly for the kids, and the other one’s not. And this one has a little girl zombie (Kingston Foster) far less traumatizing than the one in Night of the Living Dead. For me, that’s a plus, and I can’t begrudge that the kid is clearly having fun as Zed’s little sister Zoey. 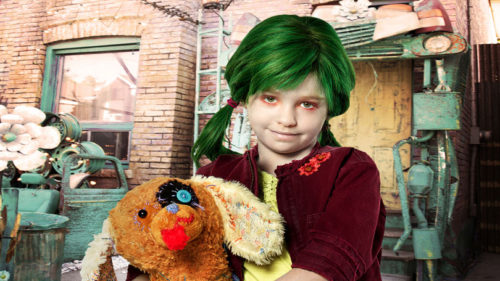 The DVD comes with the requisite bloopers, deleted scenes, and a little behind-the-scenes. It also has glow-in-the-dark tattoos. Did I put one on? I’ll leave that a mystery.

And by the way, I can’t help throw this out there: Meg Donnelly plays Taylor Otto in American Housewife starring Katy Mixon, who co-starred in the short film version of… Zombie Prom. We can’t escape the musical zombies. Might as well give in.