THIS is how time flies… I was absolutely convinced that it had been over a year since Legendary Studios teamed with Sid and Marty Krofft to remake their classic Saturday morning series Electra Woman & Dyna Girl, and that it must have been quite a while since the cast members’ appearance at Comic-Con 2015.

But no! The series is done and coming to home video as a full-length film. And we’re on board with giving it a look — to be honest, nostalgia has tinted the original series, and a refresh would probably work. Grace Helbig and Hannah Hart are bright and funny, and yes, let’s be honest, YouTube stars. But if you’re someone grumbling about that, well, the genie is out of the bottle, and it’s just one more way that content is getting created. Let the worlds merge!

A smart, witty and fresh twist on the cult-classic television series from Sid & Marty Krofft, the all-new feature-length comedy ELECTRA WOMAN & DYNA GIRL debuts on digital June 7 and on DVD July 5 from Legendary Digital Studios and Sony Pictures Home Entertainment. Further expanding into film from their YouTube origins, where combined they have generated more than 415MM views, comedians Grace Helbig (“The Grace Helbig Show”) and Hannah Hart (“My Drunk Kitchen”) transform into the ultimate superhero duo in this exciting new action comedy. ELECTRA WOMAN & DYNA GIRL follows two small-town female crime-fighters that move to Los Angeles in order to find superhero stardom. The film also stars Andy Buckley (“The Office,” Bridesmaids, The Heat). U.S. fans will also have the opportunity for an early look with Fullscreen. 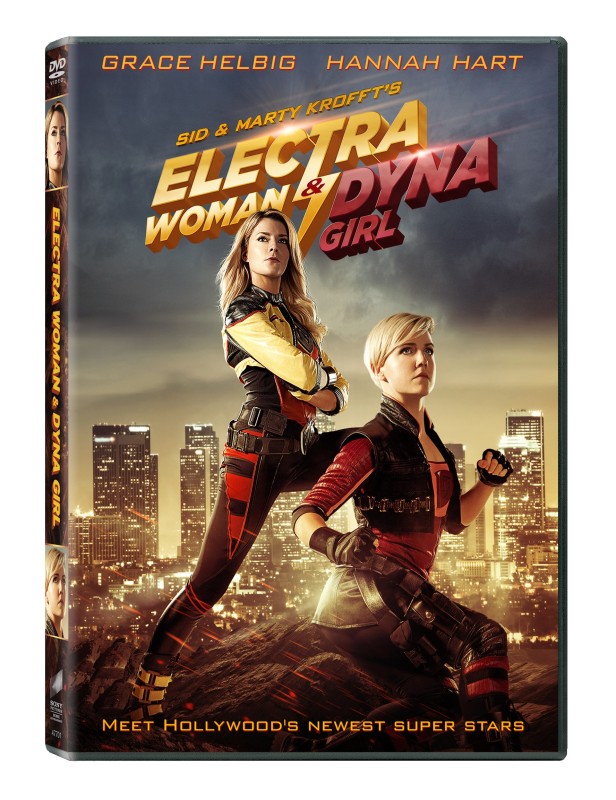 Hannah Hart and Grace Helbig previously teamed up for the iTunes Top 10 feature film Camp Takota and their live tour #NoFilter has been selling out domestically and internationally. Hart and Helbig have a combined social following that exceeds 10MM.

Grace Helbig is a comedian, actress and video blogger. She’s the creator and star of the YouTube series Its Grace for which she’s been awarded a Webby. She hosts Not Too Deep a top rated iTunes podcast and is the author of two New York Times Bestsellers.

Hannah Hart is an award-winning comedian, Internet personality, actress, producer, philanthropist and New York Times best-selling author. Hart created and stars in the YouTube series My Drunk Kitchen. She also launched Have A Hart Day, a year around initiative encouraging young leaders to volunteer their time in their communities.

Electra Woman & Dyna Girl is directed by Chris Marrs Piliero, an accomplished music video and commercial director.  After winning an MTV VMA for Breakthrough Video for The Black Keys “Tighten Up”, he went on to direct videos for Ariana Grande, Ke$ha, Britney Spears and many others. He developed his first feature with Andrew Panay, and won New Regency’s Prototype short film competition in which eight filmmakers were picked out of over 800 submissions.

ELECTRA WOMAN & DYNA GIRL follows two superheroes, ‘Electra Woman’ (Grace Helbig) and ‘Dyna Girl’ (Hannah Hart), as they move from Akron to Los Angeles in hopes of making it big in the crime fighting world, only to find competition with other vigilantes and infighting amongst themselves.

ELECTRA WOMAN & DYNA GIRL has a run time of approximately 81 minutes and is not rated. More information will be available at ElectraWomanDynaGirl.com.