Despite pundits claiming the genre is on its last legs, superhero movies are just as hot as ever. (I might argue that it’s partially because when done right, superheroes aren’t a genre in and of themselves; they’re a hyperextension of other genres.) Wonder Woman‘s successful opening weekend proves it. They’re here to stay. For those of us who love comics history, there’s a subgenre blossoming — movies about the cultural impact of these heroes in the real world.

Last month, we got an announcement of Superman vs. the KKK, a film depicting how the Superman radio show tackled the evil of that organization in the 1940s, and played a huge role in shining a light on the Klan’s activities for the general public. Hulu also began streaming Batman and Bill, a documentary about Bill Finger, the co-creator of Batman who had been denied public credit for it in his lifetime.

The story that might most interest people is the upcoming Professor Marston and the Wonder Women, starring Luke Evans as William Moulton Marston, one of the creators of Wonder Woman. Both ahead of his time for his feminist views and scandalous for those with puritanical views, Marston, his wife, and their secretary poured those beliefs into the creation of one of the world’s best known superheroes under the pen name of Charles Moulton. 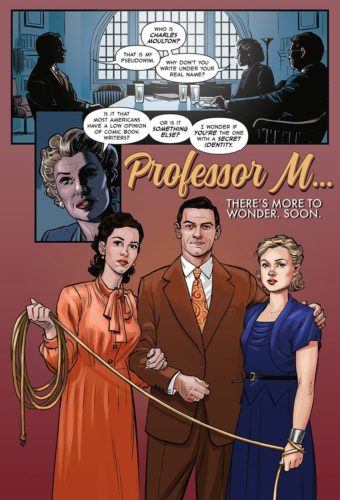 Though Jill LePore published The Secret History of Wonder Woman in 2014, it’s uncertain if the film is drawing from her take. Directed by Angela Robinson, the film also stars Rebecca Hall, Bella Heathcote, Connie Britton and Oliver Platt. A sparse website popped up over the weekend.

A release date has not been set; the teaser, allegedly shown in some theaters before Wonder Woman, is below. UPDATE 6/9/17: The Hollywood Reporter’s Borys Kit tweeted that it has been given a release date of October 27th, 2017.

Also getting a release date: PROFESSOR MARSTON & THE WONDER WOMEN, the story of the WONDER WOMAN creator played by Luke Evans: Oct. 27.