Ever have a job you wanted, but wished you still had the job before, too? That seems to be how it is for DC’s Chief Creative Officer Geoff Johns. Recently promoted to be one of the heads of DC Films (a job a lot of fans desperately wanted him to have), Johns keeps looking back to the gig that got him where he is today: comics writer.

The promotion came on the eve of the release of DC Rebirth, a massive realignment of DC Comics. As part of that event, Johns worked with all of DC’s writers to infuse his vision of what long-time fans’ vision of DC Comics should be. Officially, he was only to write the first issue, last week’s massive DC Rebirth #1. That book restored the character Johns made his bones on — Wally West, The Flash (only now he’s Kid Flash again). But the concept that made Johns an undisputed superstar in the industry was the Green Lantern Corps.

Johns told epic after epic in Green Lantern, and after he left, other writers paled in comparison. Part of it might have been editorial interference, part of it might have been “you’re not my real dad” syndrome. The Lantern books stumbled and fell, and over in Justice League, Johns introduced two new Lanterns that got lost in the shuffle: Simon Baz, a Lebanese-American youth accused of being a terrorist, and Jessica Cruz, a young woman inheriting a ring powered by Volthoom, a dark entity from Earth-3.

Both Lanterns will be front and center in Rebirth, in a book entitled Green Lanterns, while original GL Hal Jordan will get top billing in Hal Jordan and the Green Lantern Corps. (No word on when their first album will be released.) These titles will get their launch next week in Green Lantern: Rebirth #1, with Sam Humphries writing, because, you know, Geoff Johns is busy saving the DC Cinematic Universe. 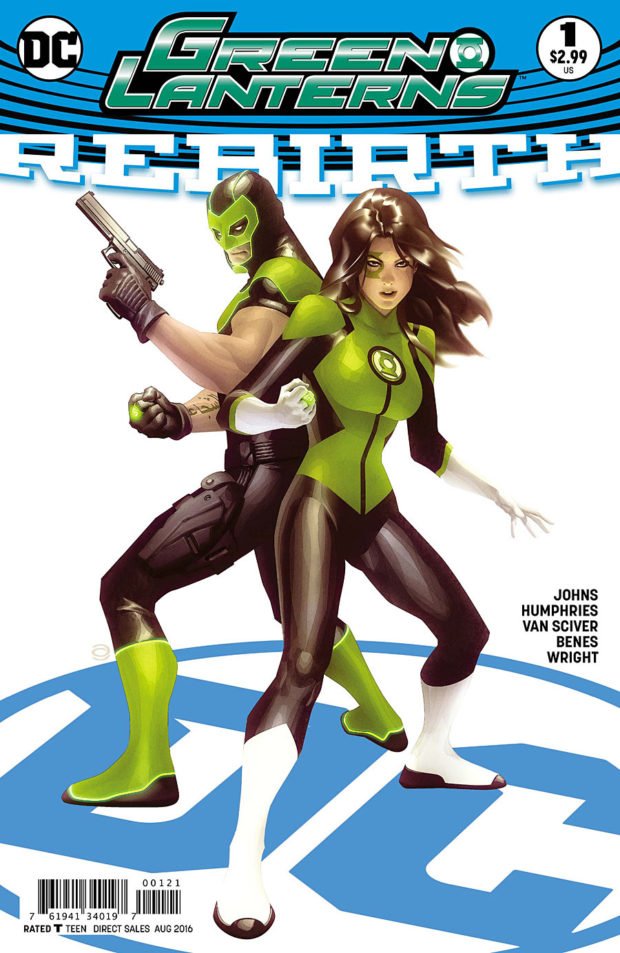 Except the book is coming out with Johns’ name in the credits as co-writer with Humphries. Comic Book Resources got the preview from DC this morning and the credits are confirmed.

Now, Simon Baz is near and dear to Johns’ heart. The writer is part-Lebanese, and has done a great thing for diversity by creating a Muslim Green Lantern — and a complicated character with which to reflect some of the struggles against intolerance that are going on in this country. So it’s hard to let go. But Sam Humphries is also a terrific writer, who has helped carry Nova over at Marvel. He’s a great choice to take over, and at least in this Rebirth issue, gets great collaborators in Ethan Van Sciver and Ed Benes.

Maybe this will be only one issue that Johns has co-writing credit. He had also promised a couple of months ago that he was looking to relaunch the Justice Society of America — which DC Rebirth #1 also teases. The trick is fitting it into his schedule while keeping his boss Diane Nelson happy with all the other media.

In some ways, this is a non-story. But on the other hand, it really proves that whether you like Johns or not (and he has his detractors), you cannot argue that the man has nothing but passion for comics. We need that. We really do. I was already looking forward to the Green Lantern relaunch; now I know I can’t miss it.