The crossover audience for this crossover will be huge. But not as huge as Godzilla. This no-brainer combination comes from IDW, BOOM! Studios, with special permission from Toho and Hasbro. All I know is that Jet Jaguar had better show up somewhere… and that writer Cullen Bunn is one of those sneaky writers who never lets me down and often creeps me out in a good way.

IDW, under license by Toho International, Inc., and in partnership with BOOM! Studios and Hasbro, announces today an all-new five-issue comic book event, Godzilla Vs. The Mighty Morphin Power Rangers, bringing together two titanic franchises for the first time!

When Rita Repulsa uses an ancient artifact to transport herself to a universe without Power Rangers, she finds herself in a world with aliens, kaiju, and… Godzilla! Hoping to annihilate this new foe, Rita hurls her own terrible creatures into battle. But she never expects that the Rangers have followed her to this alternate reality, pitting the Dinozords themselves head-to-head with the King of the Monsters! 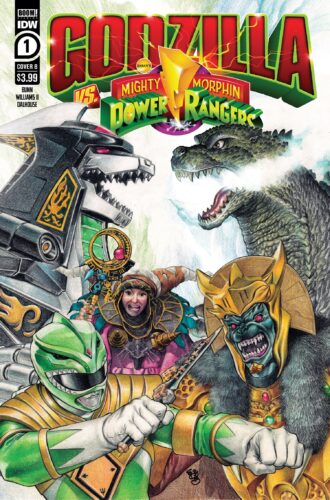 “I am honored to bring two iconic franchises like Godzilla and the Power Rangers together. I’ve been a massive Godzilla fan since before I could read, and my love for the King of Monsters has never faded in all those years. Likewise, I’ve always loved Tokusatsu superheroics, and vividly remember watching the first episode of Mighty Morphin Power Rangers when it came out. This is a crossover that I suspect will take readers by surprise—but it makes complete sense!” says Bunn. “Writing for these characters is a dream come true for this giant monster-loving kid-at-heart, and when readers pick up this book, I want them to feel that sense of awe and wonder that these characters have inspired for decades!”

“This will be the biggest, most stratospheric crossover I’ve ever drawn!” says Williams. “It’s the combination of so many big genres: Giant Monsters vs. Mechs, martial arts vs. science and magic, with lots of collateral destruction! I’ve been watching Mighty Morphin Power Rangers episodes and Godzilla films to submerge my brain space, and have been reminded how fantastic and charming these designs are and how much fun prior creators had with their designs. I’m excited to contribute to the long legacies of these franchises!”

“We couldn’t be more thrilled about this latest crossover event at IDW Publishing,” says editor Tom Waltz. “Not just because a story featuring both Godzilla and the Mighty Morphin Power Rangers checks off every awesome box on a comic-book crossover list, but also because we’ve got two of the best in the business — Cullen Bunn and Freddie Williams II — combining to bring it into being.”

“When BOOM! Studios first stepped into the world of the Mighty Morphin Power Rangers, we had some big plans and huge dreams, so it’s amazing to be able to bring to life the biggest and most exciting monster mash-up of the century,” says Dafna Pleban, Senior Editor, BOOM! Studios. “It’s been an incredible process to put together this epic series with our friends at IDW, Toho, and Hasbro. We can’t wait to show fans everything they could ever hope to see and more from the King of the Monsters and the Power Rangers universe.”

Godzilla Vs. The Mighty Morphin Power Rangers #1 will be available with multiple cover variants for retailers and fans to enjoy, including Cover A by series artist Freddie Williams II, Cover B by E.J. Su (Transformers), and a special connecting Retailer Incentive edition by Williams II which combines with the RI covers for issues #2-5 to make a glorious panorama of kaiju and Zord conflict! 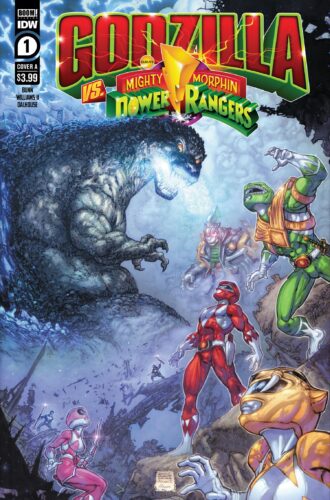