This thing might happen. After a failed pilot at Fox and years of further development hell, Locke & Key gained new life at Hulu. The beloved IDW comics series, created by Joe Hill and Gabriel Rodriguez, took another step forward with the casting of Megan Charpentier as Kinsey Locke, the middle child in a family struggling to recover after the horrific murder of their father.

Along with her two brothers, Kinsey discovers that their ancestral home in Maine contains magical keys which give the children powers and abilities. Unfortunately, there is also a magical demon that wants the keys for itself. Previously cast as Lockes are Francis O’Connor as their mother Nora, and soon to be creepiest/cutest kid in the world Jackson Robert Scott as Bode Locke. Why creepiest/cutest? Because you know him from TV ads as Georgie Denbrough in the upcoming adaptation of Stephen King’s IT. In Locke & Key, he’ll do far more than float.

IT’s pedigree runs through Hulu’s Locke & Key. Charpentier has a small role in that film, and director Andy Muschietti helms both IT and the Locke & Key pilot. (He also directed Charpentier in Mama.) And if the location of Maine didn’t tip you off that there was something Stephen King-related, co-creator Joe Hill is King’s son, and a terrifyingly good writer on his own. In addition to Locke & Key, Hulu is delving further into the King family’s vision of Maine with the upcoming series Castle Rock.

Granted, this is still the pilot stage, but as long as they have a decent budget for this Hill/IDW/Carlton Cuse co-production, finally getting Locke & Key to series is a no-brainer. 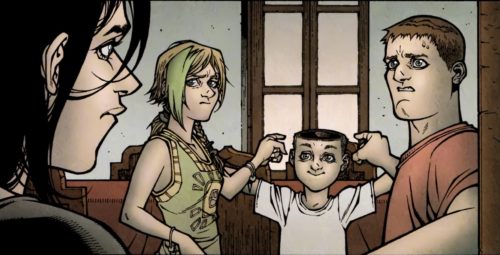