Say that to someone who grew up in the San Francisco Bay Area, and they suddenly remember a frantic bulldog puppet trying to hide a broken lamp from his best friend. It was a PSA run on KTVU over and over, spun off of The Charley & Humphrey Show created and mostly performed by Pat McCormick. The bulldog and horse became iconic, but like a lot of local kids’ show characters, they faded away as their audience grew up and McCormick himself retired.

Funny thing, though — they had a stickiness. And some of those kids who grew up now create comics. So at your local comics shop from 10 Ton Press, Charley Horse and Humphrey Hambone are having new adventures — and the first issue is a terrific kids’ comic, whether or not you know who they are.

Written by Justin Sane and illustrated by John Hageman, the comic expands on the puppets’ world — which is a cartoony but recognizable San Francisco. It’s a big day for Charley Horse, about to christen a yacht, the Dialing Dollar. Publicity from this event will bring attention to his Sea Horse Docks, and attention from Commodore Wilkins, a skeptical sea lion. Humphrey harumphs around their apartment, because he’s not invited. Accident-prone (see the sentence opening this review), he might find some way to derail the christening. He won’t mean to, of course, but Charley can’t take a chance.

Humphrey’s fleas have other ideas. 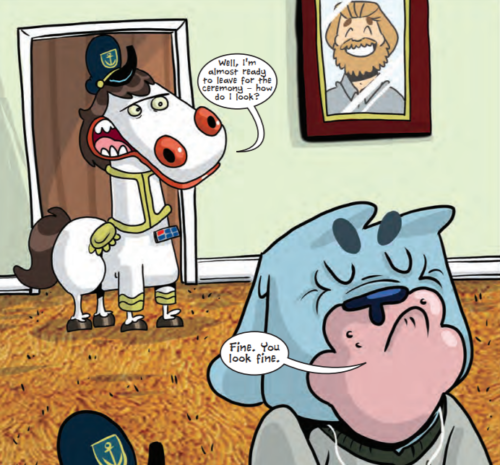 Hageman expands their expressiveness with a loose style that’s nonetheless detailed, and you can almost hear the voices of ancillary characters. That’s also because Sane has captured the voices of the main puppets (McCormick’s supporting cast actually isn’t here), but also carefully written the surrounding world. With another KTVU personality, Bob Wilkins, making an appearance as a sea lion, that’s all we need.

And one can hope Wilkins keeps appearing — an ashcan issue from WonderCon years back had him as himself, but I like the idea of him inhabiting various side characters without changing his personality much. To me, that was part of the joke of his real stint as Captain Cosmic after years of hosting Creature Features — he didn’t change demeanor, just put on a sparkly costume and helmet. Why not a sea lion suit?

It’s bright, it’s fun, and it features a cover from a giant in the comics world who clearly grew up loving Charley & Humphrey — The Boys co-creator Darick Robertson. Unlike that book, Pat McCormick’s Charley & Humphrey is one you can give to children, and help a new generation enjoy McCormick’s wonderful creations. 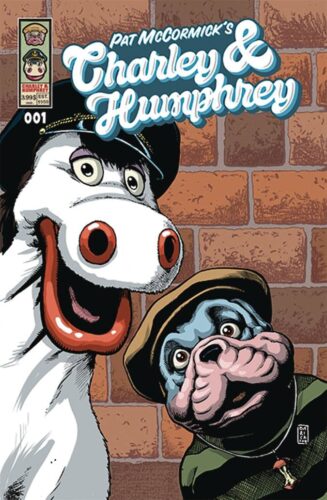 Thanks for the nostalgia, Justin and John!