The character Bloodshot has lived many lives. Infused with nanites that heal everything but his memory, he’s the perfect weapon. Until, of course, he goes rogue.

Originally created by Kevin Van Hook, Don Perlin, and Bob Layton for Valiant Comics, Bloodshot was one of a handful of titles optioned by Sony to create a Valiant Cinematic Universe. If Bloodshot didn’t exactly burn up the box office, Sony can always cry into its Spider-Man receipts.

Part of it was timing. The Vin Diesel-led movie came out right as most of the US was going into lockdown. That put it in the first wave of “premium” movie rentals at the same time as theatrical release. Though eventually Diesel powered up into the more traditional look of Bloodshot, for most of the movie he just seemed like Vin Diesel playing Vin Diesel as Vin Diesel. Plenty of people like Vin Diesel; they just have to know where to go to see him. There doesn’t even have to be that much different about it, as long as Diesel gets to execute on controlled mayhem.

On that score, Bloodshot delivers. At first glance, it looks like a typical revenge thriller, with Diesel losing everything at the hands of an evil madman. Aided by Dr. Emil Harting (Guy Pearce), the now nanite-infused Bloodshot hunts the sneering Martin Axe (Toby Kebbell) and… something’s wrong. It’s too soon in the plot. And that’s the twist in Jeff Wadlow and Eric Heisserer’s script; Bloodshot is already being used a as a weapon, with his memories programmed and reprogrammed to put in a different target as the sneering villain. (Yes, there’s a resemblance to Memento, thus no accident Guy Pearce is in the cast.)

But where Bloodshot becomes disappointing is that script that doesn’t provide much cleverness to it. Other than the twist, right out of Valiant’s 21st century reboot by Duane Swierczynski, Arturo Lozzi, and Manuel Garcia, the action kind of plods forward. It’s unstoppable, inexorable, and often predictable. It’s like an ’80s action movie with a bigger budget — the apotheosis of Cannon Films’ dreams.

What it doesn’t offer is a desire for more, which is a shame. When Valiant rebooted the character, it was purposefully part of a larger universe that the movie does not — and maybe could not — introduce. There was a plan, and it’s unlikely that it will happen. In comics, Bloodshot is sometimes called “Every Man,” because he never really knows who he is. But as noted before, Vin Diesel is always Vin Diesel. He’s a movie star who rarely disappears into his character unless it’s CG.

From a vantage point almost two years later, Bloodshot was a great idea and a decent time-passer when there was nothing but time. Despite my hopes for it going in, it’s not one to revisit. You’re better off reading the excellent comics. 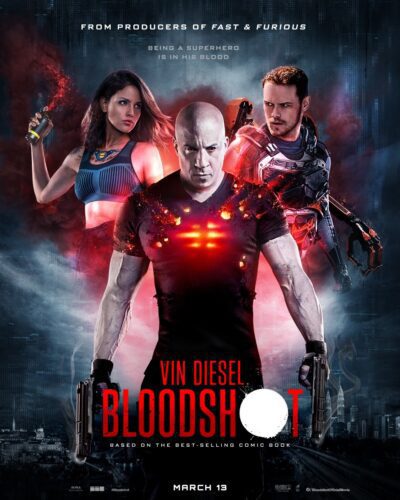 Lockdown Rewind is my attempt to circle back and review genre films from 2020 and 2021. It’s a bit of a do-over for me, and also a bit of an apology. For many reasons, depression hit me bad, and I couldn’t bring myself to write for weeks at a time. Hopefully, you’ll indulge this ongoing feature of Fanboy Planet.

Fanboy Planet is an affiliate of several vendors; any purchases made through links on this page or on this site may result in revenue for us.