The Fox is back, and Dean Haspiel is in control. Despite being pretty strong characters, the Mighty Crusaders from Archie Comics and/or Red Circle have trouble catching reader’s attentions. Maybe it’s because on the surface they look like knock-offs of other more popular characters. (The average comics reader doesn’t know or care that The Shield predates Captain America.)

So you have to do something different. A few years ago, Archie Comics did, bringing Mark Waid and Dean Haspiel to put a twist on The Fox. The result was an energetic, loopy superhero book that was like nothing else out there at the time. An investigative journalist can’t help but attract trouble — quite literally. The problem — and luckily, superpowers — spreads to his wife and son, and The Fox: Freak Magnet was fun as heck.

Admittedly, making The Fox a “freak magnet” echoed Blue Devil living in the House of Weirdness, but it was 100% its own thing. After a couple of mini-series, like almost everything Archie except for the core Archie characters, The Fox faded away until the next attempt.

Now he’s back in a one-shot special, guided by the architect of what made him so strong. Dean Haspiel returns to continue and expand the story, aided by Vito Delsante and Richard Ortiz, with colorist Matt Herms and letterer Jack Morelli. The Fox: Family Values covers several eras — including reprinting a 1960s Fox story by Alex Toth. 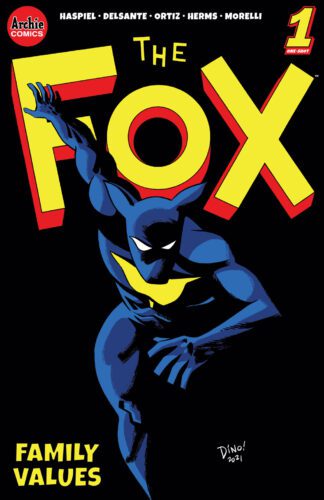 “What’s so interesting about this character is that he’s a superhero unlike any other—he can deftly tackle both serious issues and weird and wacky villains and situations all in the same issue,” said Senior Director of Editorial Jamie L. Rotante. The 60s version had hints of that, too. With his previous series, Haspiel expanded the Fox family, and they’re all here: The Fox, She-Fox, and their son Ghost Fox.”

On his lead story “Mid-Life Pisces” Haspiel commented, “When I plotted and drew ten issues of The Fox, I was basically given full latitude to do what I wanted and it encouraged me to open all kinds of unexpected doors. After a good 5-year break, I wondered where The Fox was these days and realized his ‘freak magnet’ curse had become a family affair. I decided to explore a day-in-the-life story about a man and his wife and their son and how each one of them deals with their idea of what it means to be a hero. I also wanted to deliver a tale that could introduce The Fox to new readers and spark the possibility of more stories!”

Delsante and Ortiz contribute a story set before the Foxes got married. It seems that magnetism kicked in before they even realized it.

The Fox: Family Values hits your local comics shop on May 18, 2022. Hopefully, this will lead to more. Archie Comics does Archie well, but you really should see that they do more genres well. 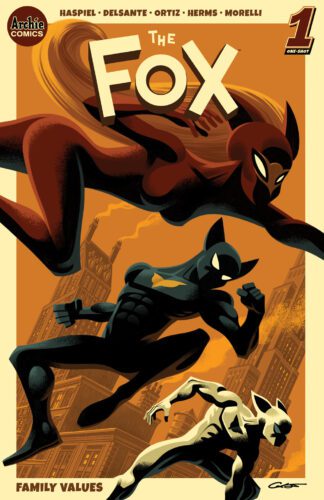 Pick up the first mini-series by Mark Waid and Dean Haspiel here!

Fanboy Planet is affiliated with some vendors listed on this site, including Amazon. Any purchases made through links on this page or site may result in revenue for us.