Though their comics adventures are not officially in Star Wars canon, Ron Howard made sure that they themselves were. Two of the most unknown and yet crucial characters in the Star Wars Galaxy are not only appearing in Solo: A Star Wars Story, they’re getting a new edition of their prior adventures from Marvel Comics, and it’s about time.

Created by Kevin Rubio and Lucas Marangon, the two function as the Rosencrantz and Guildenstern of the battle between the Empire and the Rebellion. Originally appearing in comics from Dark Horse’s time with the Star Wars license, they fumbled through key moments in two mini-series of their own and a short story appearing in Star Wars Tales. Long out of print, the original trade collection goes for around $40, but Marvel has finally seen the light — and the tie-in to Solo. Today it hits stores for the low low price of $7.99, and that’s a heck of a bargain.

Here’s a sample by Rubio and Marangon:

Lifting a page from Shakespeare (and Tom Stoppard) and applying it to Star Wars before it became trendy, Tag and Bink Were Here also predates now-parent company Disney’s dipping a similar toe into the well. First, seek this book out at your local comics shop. If you can’t find it there, then by all means, buy it here. You’ll be glad you did. 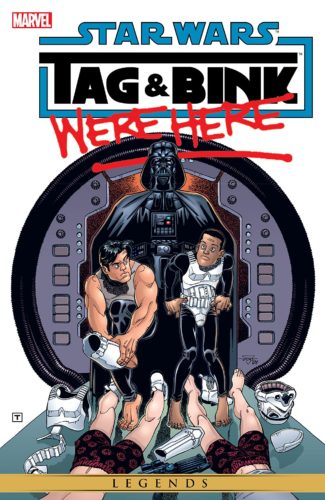