Even if you play your cards right, “…brothers will fight, there will be confrontation, hopelessness, you might even hit rock bottom.” And yet you can join fellow members of the Umbrella Academy in facing down some of the wildest evils that can be spawned from the imaginations of Gerard Way and Gabriel Bá. Dark Horse Entertainment teams with Studio71 Games to create The Umbrella Academy, a battling card game that puts you in the midst of madness and justice.

Kickstarting ahead of the July 31 2nd season premiere of The Umbrella Academy on Netflix, the game pulls more directly from the comics than the show. But that just means you get to face down villains like Dr. Terminal and Perseus X, though Hazel and Cha Cha will be there, too, drawn by Bá. If you “pre-commit” (sign up for the Kickstarter newsletter), you’re eligible for a shiny Number 5 card. And let’s face it, if you’re a fan of the show and/or the comics and you’ve read this far, you’re going to pre-commit.

So here’s the link at UmbrellaAcademyGame.com.

And here’s the press release:

Dark Horse Comics and Studio71 Games, a Red Arrow Studios company, have joined forces to release a battling card game based on the hit comic series The Umbrella Academy from Gerard Way and Gabriel Bá. Ahead of its Netflix Season 2 premiere on July 31, fans can pre-commit to buy the game at UmbrellaAcademyGame.com and bring to life the fantastical and dysfunctional world of The Umbrella Academy in the comfort of their living rooms.

“We are thrilled with the continued fan response and reception to The Umbrella Academy. Our love for these stories and characters is what makes us excited for you all to get to experience them firsthand with the Studio71 Umbrella Academy Card Game,” said Gerard Way and Gabriel Bá.

The game brings together your favorite seven siblings to defeat hordes of villains in cooperative battle. Play as “Five”, “Séance”, “Space Boy”, “The Rumor”, “The Horror”, “The Kraken”, or “Vanya”, each with their own unique powers. These abilities give players a powerful strategy to follow during the game. Players take one energy bar card; the energy bar measures your energy throughout the game so that you can use special abilities. You’ll battle the deadly villains like “Carmichael”, “Dr. Terminal”, “Perseus X and Medusa”, “Hazel & Cha Cha” and many more. 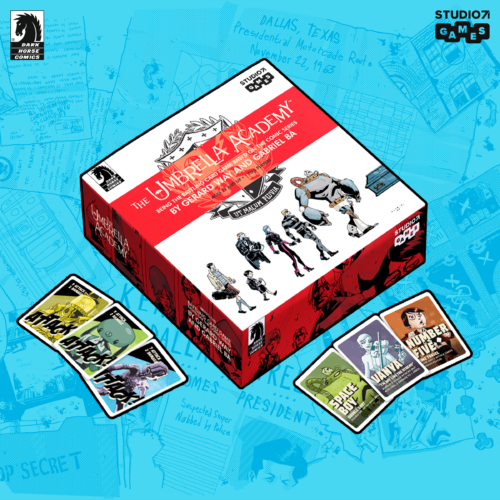 Based on the number of players, shuffle and place the indicated number of villain cards in the middle of the play area, face down. Those villains will use villain attack cards to battle against the siblings. The players put forth their attacks against the villain attack cards, face down. Upon revealing the cards, the heroes and villains compare score values. The winning card being the one with the greater damage. An Umbrella Academy game would be nothing without a little dysfunction, brothers will fight, there will be confrontation, hopelessness, you might even hit rock bottom. Throughout the game, dysfunctional family cards bring the comic themes to life and affect each round. The siblings are victorious when all the villain cards are defeated, but if the villains overwhelm the siblings the world will be destroyed. This game is far beyond the ordinary so if you’re ready to save the world, this card game is for you.

Fanboy Planet is an affiliate of Amazon. Any purchase made through an Amazon link on this site may generate revenue.

About Derek McCaw 2061 Articles
In addition to running Fanboy Planet, Derek has written for ActionAce, Daily Radar, Once Upon A Dime, and The Wave. He has contributed stories to Arcana Comics (The Greatest American Hero) and Monsterverse Comics (Bela Lugosi's Tales from the Grave). He has performed with ComedySportz and Silicon Valley Shakespeare, though relocated to Hollywood to... work in an office? If you ever played Eric's Ultimate Solitaire on the Macintosh, it was Derek's voice as The Weasel that urged you to play longer. You can buy his book "I Was Flesh Gordon" on the Amazon link at the right. Email him at editor@fanboyplanet.com.