To completely give over to Dreamworks’ How to Train Your Dragon, you have to accept a couple of things. First, there are dragons. That’s really not a problem, as whatever title you think it has, you know going in that it’s about dragons. Secondly, you have to believe that Vikings were actually Scottish, but that you don’t get your accent until you achieve full adulthood.

Sorry, Scotland, but after about ten minutes of this exuberant family film, it became abundantly clear that in the dead of night those bloody Vikings snuck in and completely pillaged your dialect. Your loss was their gain.

Burly men need a burly accent, especially when they have to defend their village against marauding hordes of dragons. That village may be generations old, but every building is new, as they have to rebuild after every attack. Only one teenager, Hiccup (Jay Baruchel), realizes that there’s got to be a better way.

Except that when we meet him, Hiccup is just as bloodthirsty as his people. With a willing spirit, he has a problem being somewhat less than puny in comparison to his father, Stoick (Gerard Butler). Having father issues to spare, Hiccup chooses to dabble in advanced weaponry, halfway under the tutelage of the village blacksmith Gobber (a brilliant Craig Ferguson).

If only Hiccup could be more of something other than all of what he is, Gobber advises, then maybe the village would respect him. And maybe he could earn the love of his life, America Ferrera’s Astrid, looking like ABBA joined Dethklok.

When the chips are down, Hiccup has his chance to slay a dragon but makes a fateful choice putting him on the path we expect. It’s the telling, not the tale itself, that works so extremely well. Even though many beats of the story are familiar, Directors Dean DeBlois and Chris Sanders have a few curves to throw and a willingness to be lightly disturbing with their imagery.

Of course, it should be expected from Sanders, a somewhat underrated creator who hand-delivered unto Disney their greatest late 20th Century creation, Stitch. An old hand at bobbing and weaving into family friendly anarchy, he has a knack for finding the bizarre and helping us realize our similarities.

The film takes bizarre stretches with dragons, using design influences from a variety of cultures’ traditions. Some dragons have a distinct resemblance to those in China’s mythology, some more Western, while the dragon we come to love, Toothless, feels a lot like a lost Pokemon.

Yet Toothless has a lot more personality than that implies. It’s not a fast character arc from apparently savage creature (a breed of dragon that the Vikings had only known from the damage in its wake, never slowing down enough to be seen) to domesticated pet. For far longer than usual, Toothless’ alliances are in doubt. Like Stitch, he struggles with his own nature, and the understandable prejudices of the Viking clan make that struggle harder.

All the character work is memorable, though Hiccup’s peers are mostly comedic stereotypes. Jonah Hill steps in as a Viking boy full of bravado and clearly modeled after Jack Black, while the creative team finds a way for Christopher Mintz-Plasse to transplant his gamer nerd characterization to actual dragon fighting.

None of them have Scottish accents, but that’s okay. It helps them stand out from the older actors, including short bursts from Ashley Jensen (Extras and Ugly Betty) and David Tennant (do I really have to remind you?).

Dreamworks hasn’t really touted the voice cast, and in truth, the concept doesn’t need it. But this movie has some solid acting work, and Butler may have delivered his finest performance of the year as a father struggling to connect with his son but having no idea how to go about it.

All this works in tandem with beautiful design and astounding lighting. The team consulted with Cinematographer Roger Deakins to create a world of wonder. The quality of the movie alone makes it worth seeing; Deakins’ work makes How to Train Your Dragon worth seeing in at least 3D. (I saw it in IMAX as well.)

Not every movie deserves to charge that extra fee for glasses, but when one immerses you in a wondrous environment like this one, you have to consider it. Even if you’re not sure what to call the movie.

And that’s my strangest sticking point. For the first time that I can recall, a major movie studio has an ad campaign that is either absolutely brilliant or absolutely insulting to the intelligence of the movie-going public. If you have seen or heard an ad on television or the radio for this movie, they sometimes call it Dragons, immediately jumping to the title that small children and grandmothers would be calling it anyway.

I feel a little bit like that’s an approach in how to train your sheep, but the whole family should go, including those teens trying to find where they fit in their village. 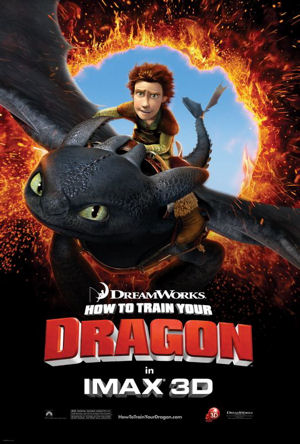